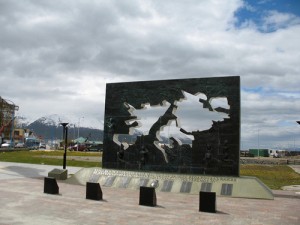 Argentinian President Cristina Fernandez de Kirchner is once again calling on the UK to hand back the Falkland Islands — known in Argentina as Las Malvinas — accusing Britain of blatant colonialism.

In an open letter to British Prime Minister David Cameron, which was published in the British press, she says that Britain stripped the islands away from Argentina 180 years ago on Thursday’s date: January 3.

The two countries went to war over the territory in 1982, when the then-Argentinian military government landed troops on the islands.

Argentina put its death toll from the conflict at around 645. Britain’s civil and military losses amounted to 255.

In the letter, which was copied to U.N. Secretary-General Ban Ki-moon, the Argentinian president writes: “The Argentines on the Islands were expelled by the Royal Navy and the United Kingdom subsequently began a population implantation process similar to that applied to other territories under colonial rule.

“Since then, Britain, the colonial power, has refused to return the territories to the Argentine Republic, thus preventing it from restoring its territorial integrity.”

She quotes a 1965 U.N. resolution inviting the two countries to negotiate a solution to the sovereignty dispute and calls on the British to abide by the resolution.

Read more: Why tensions are rising over Falklands

Located in the South Atlantic Ocean, about 480 kilometers (298 miles) east of the tip of South America, the Falklands have long been coveted as a strategic shipping stopover and potential wellspring of natural resources.

The Falklands, which raise their own taxes but rely on the United Kingdom for defense and foreign policy, are one of 14 British overseas territories and have been under British rule since 1833.

The British government swiftly rejected the idea of negotiations, saying the Falkland Islanders have chosen to be British.

In a statement, the British Foreign Office said the islanders remain free to choose their own futures and “have a right to self-determination as enshrined in the U.N. Charter. This is a fundamental right for all peoples.”

The statement added: “There are three parties to this debate, not just two as Argentina likes to pretend. The islanders can’t just be written out of history.

“As such, there can be no negotiations on the sovereignty of the Falklands Islands unless and until such time as the islanders so wish.”

The islanders are due to hold a referendum on their political status this March but were also quick to dismiss the Argentinian position.

“We are not a colony,” said Barry Elsby, a member of the Legislative Assembly of the Falkland Islands. “Our relationship with the United Kingdom is by choice.”

The exchange comes amid rising tension over the islands, which are home to about 3,000 people.

In February of last year, the Argentinian leader accused the British of militarizing the South Atlantic after the Royal Navy sent its warship HMS Dauntless to the region. Then, in June of 2012, Fernandez confronted Cameron at the G-20 meeting and tried to hand him a letter about the islands — something he refused to accept.

The dispute flared again ahead of the London 2012 Olympics, when Argentina released a video boosting its Olympic team that was filmed on the islands. The advertisement showed Argentinian field hockey star Fernando Zylberberg training in the streets of Port Stanley in the Falklands. The video ends with the slogan: “To compete on English soil, we train on Argentine soil.”

From Mali to Azerbaijan: No Double Standards, S’il Vous Plait