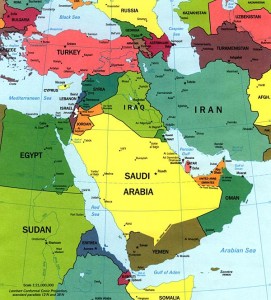 With the Obama administration’s signing of a very specific nuclear deal with Iran, key American allies in the region are being left behind.

There’s still room for the administration to incorporate Israel, Bahrain and Azerbaijan’s interests into a comprehensive Nixon-esque strategy of rapprochement. But anything less than that would not only endanger our friends, it would foment discord in the region and hurt long-term U.S. interests.

Congress has an opportunity to weigh in and it should. Members have a vested interest in U.S.-Iran policy and should understand the bigger picture.

Before the deal, when Israel’s Prime Minister Benjamin Netanyahu visited Washington last month, he expressed deep disquiet about a lack of coordination with the United States on Iran policy. For Israel, the threat from Iran is not just about nuclear weapons, it is about the Islamic Republic’s sustained bellicosity about Israel’s existence and its wider aggressive posture in the region. This is manifested in the Gulf, in Iranian threats to close the Straits of Hormuz bottleneck to international oil exports, and, of course in Syria and Lebanon, where Iran’s proxies, Bashar al-Assad and Hezbollah, are continuing to cause major instability.

This is Israel’s neighborhood too, and Netanyahu knows that even an Iran without nuclear weapons is the most serious threat in the wider Middle East. One cannot blame the Israeli leadership for being concerned about a U.S.-Iran thaw that might lessen the global nuclear threat but embolden Tehran’s destabilizing regional ambitions.

When U.S.-led sanctions and pressure are eased as part of the deal with the supposedly more moderate Iranian President Hassan Rouhani, what authority will then ensure that U.S. allies in the region are protected?

Leaders in Bahrain, the tiny Gulf monarchy that hosts the U.S. Navy’s Fifth Fleet, are troubled. For the past two years, the island has experienced ongoing low-level terrorist attacks by militants purporting to fight for the majority Shiite population against Bahrain’s Sunni rulers. A wider violent rebellion, such as what occurred in Bahrain in 2011, is kept in check by forces from neighboring Saudi Arabia, with Washington — until now at least — deliberately turning a blind eye. This is largely because all parties know that Iran is stoking the rebellion and has openly threatened to support its fellow Shiites in toppling an Arab regime that supports U.S. military operations.

However, in his U.N. General Assembly speech, President Barack Obama compared the situation in Bahrain to “sectarian tensions” in Syria and Iraq. The Bahraini leadership took offense at what seemed like a legitimation of Iranian actions within the country, while anti-regime forces were buoyed, organizing one of the largest rallies in the past two years. While the administration may have real concerns about governance in Bahrain, this is hardly the time to poke a U.S. ally under threat from Iranian subterfuge.

The administration’s own recent senior advisor for nonproliferation, Robert Einhorn, recently said as much: that we have “not consulted enough” with Iran’s neighbors and that the administration should “begin much more intensive consultations” to ensure that we are not throwing allies under the bus.

To the north of Iran is another U.S. ally that faces regular open threats, terrorist incursions and Islamist radicalization sponsored by Iran. Azerbaijan is unique among Iran’s neighbors in that ethnic Azeris make up about 20 percent of Iran’s population, with the major Iranian city of Tabriz as their center. Supreme Leader Ali Khamenei is an ethnic Azeri. Due to Azerbaijan’s staunchly pro-Western stance, however, Iranian senior officials have openly discussed annexing the country and regularly threaten to strike Azerbaijan’s oil and gas pipelines that lead to Europe. Shiite-majority Azerbaijan has therefore forged a close relationship with Israel, jointly producing drones and monitoring Iranian movements.

Azerbaijani leaders have stated publicly that they would like nothing more than a good working relationship with their neighbor to the south, but only as part of a comprehensive rapprochement — one in which Tehran would not only promise to stop pursuing nuclear weapons but also lose its aggressive regional stance. Barring that, the nuclear deal is only cause for worry among America’s regional partners.

Congress should urge the administration not only to reassure its allies that they will not be sacrificed at the altar of expediency, but to work closely with them, and take their interests into account. If Obama is serious about dramatically altering the U.S. position toward Iran, it would make sense to do so as a coalition of concerned states, not by leaving Iran’s neighbors behind.

Alexandros Petersen is author of “The World Island: Eurasian Geopolitics and the Fate of the West”

The Iran conundrum: Geopolitical ramifications of the Middle East situation

The Iran conundrum: Geopolitical ramifications of the Middle East situation