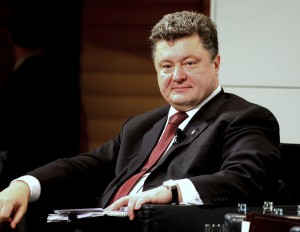 The chocolate selling contender for the post of the President of Ukraine Petro Poroshenko came out as the winner of May 25 Presidential elections in Ukraine. The elections were held following the volatile period of interregnum with ousting of President Yanukovych and interim government forced to take actions against pro-Russian separatists in Eastern Ukraine.

The newly elected president already declared himself as a re-conciliator pledging to visit the Donets Basin soon after assuming the post. Separatists in the region have already held a referendum of their own on May 11 with majority voting for breaking away from Ukraine. The central government in Kyiv saw it as a Moscow-orchestrated action against the territorial integrity of sovereign Ukraine.

President Obama made a statement following the announcement of final results of the presidential elections in Ukraine:

“On behalf of all Americans, I congratulate the people of Ukraine for making their voices heard by voting in their presidential election today.  Despite provocations and violence, millions of Ukrainians went to the polls throughout the country, and even in parts of eastern Ukraine, where Russian-backed separatist groups sought to disenfranchise entire regions, some courageous Ukrainians still were able to cast their ballots.  We commend the resolve of all those who participated, as well as the efforts of the Ukrainian government to conduct these elections in the face of those threats.

Throughout the last few months, the Ukrainian people have repeatedly demonstrated their desire to choose their leaders without interference and to live in a democracy where they can determine their own future free of violence and intimidation.  This election is another important step forward in the efforts of the Ukrainian government to unify the country and reach out to all of its citizens to ensure their concerns are addressed and aspirations met.

The United States looks forward to working with the next President, as well as the democratically elected parliament, to support Ukraine’s efforts to enact important political and economic reforms.  We also continue to support Ukraine’s sovereignty and territorial integrity, condemn and reject Russia’s occupation and attempted annexation of Crimea, and remain committed to working with Ukraine and other partners to find a peaceful resolution to the conflict.”

Time for a new trend in Ukraine

Time for a new trend in Ukraine

State oil companies of Azerbaijan and Russia sign an agreement