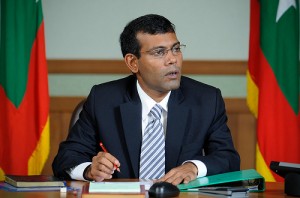 The President of the Maldives, an archipelago nation in Indian Ocean, resigned on Tuesday, as a result of escalating riots in the capital Male. Mohamed Nasheed who was the first democratically elected president of the country, took the office in 2008. Often credited for introduction of democratic reforms, Nasheed happened to succeed Maumoom Abdul Gayoom, an autocratic leader, who ruled the Maldives for thirty years. After leaving the post, Gayoom who was previously a member of Dhivehi Rayyithunge Party (Maldivian Peoples Party, DRP),  eventually founded his own Progressive Party of Maldives in 2011, turning it into a strong opposition movement against the rule of President Nasheed.

The chaos in this small nation was reportedly caused by the arrest of a judge Abdulla Mohamed who was accused by Nasheed of being “in the pocket of Gayoom”. Imprisonment of the judge led to widespread protests which triggered a constitutional crisis and allegations that Nasheed was acting like a dictator. The neglect for growing crowds over the period of several weeks developed into clashes between the army and protesters, where the local police is claimed to have taken the side of the protesters. Witness accounts claim the rioting police stormed Nasheed’s Maldives Democratic Party headquarters before taking control of MNBC, the main state broadcaster. The army was already accused of using rubber bullets on demonstrators. President who stepped down on February 7, claimed to have left the office to avoid possible bloodshed. Companies in tourism business have begun to discourage their customers, currently in the country, from visiting the capital Male.

Mohamed Nasheed, the main rival of Gayoom, had been arrested by Gayoom’s government 27 times as a journalist and political prisoner, spending a total of 6 years in state prison. With presidential elections coming up in 2013,  Nasheed’s political contenders claim he had taken the country in the wrong anti-Islamic direction during his term in the office. In December of last year, opposition groups bashed the government of Nasheed for disrespect to Islamic laws and overturning the ban of massage parlors, sale of pork and alcohol in the country’s resorts. Nasheed, has also been credited with attracting the attention to the problem of climate changes. The rising water levels of the Indian Ocean already brought most of the archipelago down to 4.9 feet above sea. The United Nations’ Intergovernmental Panel of Climate Change estimates a rise of water levels by 7.1 inches by the turn of the century. To raise the awareness, Nasheed had reportedly held one of his cabinet meetings with ministers in scuba diving costumes.

Nasheed resigned and handed the power over to the Vice President Mohamed Waheed Hassan Manik.

The Maldives is a Muslim nation of 400 thousand. The archipelago is a top leisure destination, especially for honey-mooners. Fishing is the second largest source of income for the residents, the first is tourism. The islands get approximately 900,000 tourists from all over the world, bringing millions of dollars, which account to 28% of its GDP. While the resorts in its 1,200 islands are largely unaffected, the turmoil in the capital Male may bring uneasy feeling to potential tourists, who are likely to divert to other popular destinations.

SAARC: a lost cause?

Will the Maldivian democratic institutions remain independent in the forthcoming presidential elections?

South Asia: The unfolding of present political situation in the Maldives

India and Pakistan’s growing tensions and the eighteenth SAARC Summit

SAARC: a lost cause?

Will the Maldivian democratic institutions remain independent in the forthcoming presidential elections?

South Asia: The unfolding of present political situation in the Maldives

India and Pakistan’s growing tensions and the eighteenth SAARC Summit

The extent of U.S. military involvement in Syria