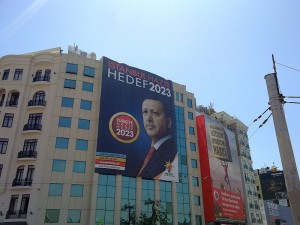 Turkish Prime Minister Recep Tayyip Erdoğan can become president if he wants, Deputy Prime Minister Bülent Arınç said while accusing Islamic scholar Fethullah Gülen of attempting to take down the government during a live interview with CNNTürk on March 2.

“We know and we are sure the prime minister will win the presidency if he considers running after his successful term in the Prime Ministry. We will work for this with all our power because he strongly deserves this,” said Arınç upon a question whether the ruling Justice and Development Party (AKP) candidate in the presidential elections would be Erdoğan.

Arınç said the AKP’s candidate would come first in the first round of the presidential elections regardless of who is nominated.

“We will run with who [is more likely to] win. This might be Mr. Prime Minister or someone else. The goal is to win in politics,” said Arınç.

Arınç also touched on voice recordings allegedly between the prime minister and his son, Bilal Erdoğan, about disposing of millions of dollars on Dec. 17, 2013, the day a graft operation targeting massive government fraud was started.

He said he demanded that state television station TRT examine the voice recordings, adding that the channel decided the recordings were fake.

“I believe these recordings are montaged,” said Arınç, adding that he knew Erdoğan and said he believed he would not become involved in corruption.

Arınç also defended his government’s moves in the judiciary and police since Dec. 17, declaring that non-action could have resulted in Turkey’s collapse. “If nothing had been done in the Supreme Board of Judges and Prosecutors (HSYK) and in the police department [after Dec. 17], Turkey would have found itself in chaos today,” Arınç said.

But Arınç also departed from Erdoğan’s line on releases in the graft case, saying the release of the sons of two ex-ministers and prime suspect Reza Zarrab had hurt the public conscience.

“[The releases pending trial] have hurt consciences, just like the cases of long imprisonment. I do not say, ‘Let them stay behind bars,’ but I want to see the [investigation] file include the extent to which a businessman influenced the public interest. Very different things could come up. I have witnessed a lot of things like this during my career as a lawyer,” Arınç said.

Barış Güler, the son of former Interior Minister Muammer Güler; Barış Kaan Çağlayan, the son of former Economy Minister Zafer Çağlayan and Zarrab, an Azeri-origin businessmen who allegedly bribed four ministers, were released pending trial on Feb. 27. With their releases, no suspects are left behind bars in the massive corruption and graft probe.

The deputy prime minister also criticized the release of Süleyman Aslan, the former director of a leading public bank, Halkbank, who was arrested after $4.5 million was found in shoe boxes in his house. “I do not even have a word to say about it,” Arınç said.

He recalled that Zarrab had given a watch worth $700,000 to former Economy Minister Çağlayan as a present and that a businessman had paid the tuition fees of the daughter of one of the prime minister’s advisers, and said he was “embarrassed” by the revelations. “If you ask me about the watch on his arm and his daughter’s fee, I cannot give an answer you because of my embarrassment. It’s not possible to cover up corruption,” he said.

Despite stating that the government was committed to fighting against corruption and investigating such claims, Arınç stressed that the real motivation of those who launched the graft probe was to topple the government.

“I am of this opinion today. I think this operation is not directly linked with Zarrab. They have been used in parallel to some developments abroad that are dedicated to tarnishing Turkey’s image,” he said.

According to Arınç, what began on Dec. 17 is not just an issue of “eavesdropping,” but a battle that has been ongoing for months. “It started with the [closure of] cram schools [dershanes]. The government has been criticized for this. Their tone rose to the point of hostility,” he said.

He added that the movement of Islamic scholar Fethullah Gülen had started to “threaten the government, which shows that our prime minister was right. The issue is not just about prep schools.”
Deputy Prime Minister Emrullah İşler followed Arınç and suggested that the Gülen movement had “blackmailed and threatened” the AKP government.

Erdoğan’s control over Turkey is ending – what comes next?

Erdoğan’s control over Turkey is ending – what comes next?

How should the United States respond to the Ukrainian situation?