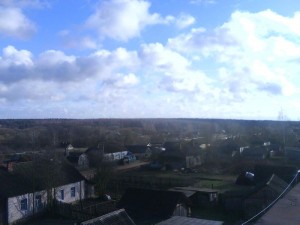 The invasion of Crimea by Russian troops and its subsequent annexation has caused an uproar in the international community. The referendum held by the ethnic Russian administration of Crimea multiplied the dismay.

Yet, while many argued – and rightfully so – that Russia has its own separatist hotspots that can erupt at any time, nobody could possibly imagine that it would come from the brotherly nation. No, it’s not Chechnya or the Republic of Ichkeria as Chechens prefer to call it. It’s not even Ingushetia, Dagestan or Tatarstan. It is a Slavic nation which shares the language and culture with Russia.

In an ironic twist of fate, Moscow is faced with emerging demands from Belorussian community of Russia’s Smolensk region to cede the Shumyachi district to Belarus. The initiators of the campaign maintain that Belorussians hold the majority in the given district and the region itself is historically Belorussian and had been taken away by the Soviets in the harsh of Bolshevism.

The entire reunification saga is a copy-cat of the Russian claim to Crimea. By presenting historical and demographic claims, the Belorussian minority in Shumyachi district intend to hold a referendum to decide whether the district will join its historical owner Belarus or remain in Russia.

According to the Belorussian media, activists are collecting signatures on the website of public petitions www.avaaz.org and www.change.org. The petition is addressed to the administration of the Shumyachi district and the entire Smolensk region. The text of the petition states that “a greater part of the Shumyachi district had been a part of the Republic of Belarus until 1939. We consider the seizure of the original Belorussian lands to be illegal.”

The originators of the text state that “Smolensk had been the eastern outpost of the Grand Duchy of Lithuania for many centuries. Even after its enforced seizure by Moscow, ethnographic researches of the 19th century said the prevailing part of the population was the Belorussians. The Belorussian People’s Republic, which was proclaimed in 1918 and included the lands with the Belorussian ethnic majority, claimed to include Smolensk. The BSSR, founded by the Bolsheviks on January 1, 1919, as a response to the proclamation of the BPR, was proclaimed in Smolensk, which was declared as its capital. Most lands of the BSSR were cut off by a half-baked voluntary decision in the following two years. Some of districts were returned after many years of behind-the-scene struggle, but some were not so lucky. We think the historical injustice should be fixed. The population of the Smolensk region should be given an opportunity to vote freely on a referendum for joining the Republic of Belarus.”

So far, only close to 2,000 signatures have been collected. But regardless of the amount, it is unlikely that Russia will allow any sort of secession of its sovereign territory to another state. Ironically, Belarus was among 11 states which voted against the United Nations General Assembly resolution condemning annexation of Crimea by Russia in late March.

There have not been any reactions from official Minsk yet. Perhaps, the Lukashenka government is awaiting reaction of Kremlin first.

Democracy matters in procuring nuclear energy, but only slightly

Do you want less corrupt governments? Then diversify your energy export

Democracy matters in procuring nuclear energy, but only slightly

Do you want less corrupt governments? Then diversify your energy export

The "G11" and what they have against Washington