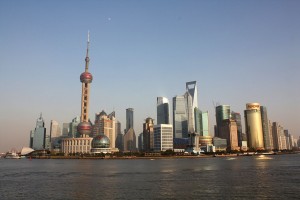 After years of negotiations and what seems to be the right time for Russia – and for China, for that matter – the Russian energy giant Gasprom signed an agreement with China National Petroleum Corporation (CNPC) to supply natural gas to China. The contract was inked on Wednesday in Shanghai by the management of the companies in presence of two countries’ leaders.

Needless to say, China, hungry for energy, is in a better negotiating position due to Russia’s uneasy position and subjection to sanctions after Moscow’s conquest of Crimea and an ongoing partition of Eastern Ukraine. It’ll take Russia up to four years to get the gas pumping to China’s northeastern region, yet the signing ceremony serves to the domestic propaganda of President Vladimir Putin whose ranking have soared after Kremlin’s highly nationalistic overtures in Crimea and Eastern Ukraine. To reassure the Russian public, President Putin needs to maintain his strong stature against the West. This deal clearly cries out: “You impose sanctions, no problem! We’ll get the profits from the East.”

The Russian President already went as far as calling the agreement with China the “largest in the gas sector during eras of both Soviet Union and Russia,” which will be the biggest construction project in the world for the next four years.

According to ITAR-TASS, the gas will be supplied from Russia’s Kovykta and Chayanda gas fields. The former is believed to have reserves of up to 2 trillion cubic meters of gas; the latter 1.24 trillion cubic meters. They are located in Eastern Siberia and Yakutia regions of the country, respectively. The project, including the development of the fields, construction of the pipeline to China’s northeast and installation of compressor stations will require $55 billion, 20 of which will be contributed by China. Alexei Miller, the President of Gasprom stated that the total price of the contract is $400 billion for the entire duration of the deal.

Yet, Gasprom has not revealed the price Russia will sell gas to Chinese. Miller said that the price cannot be made public since it is a commercial secret. Russian media also reports that to come out of the negotiations deadlock, President Putin must have offered zeroing out the tax for extraction of minerals destined for China, which allegedly was met by a mutual offer by Chinese to waive the gas import tax. China’s laws impose a 13% value added tax on imported gas which was waived for gas incoming from Turkmenistan and Myanmar, as well as imports of LNG.

The negotiations had lasted about a decade. Russia had been trying to export 68 bcm a year. Gasprom does not rule out that after 2018 when the first shipments are expected to start, the volumes may gradually rise from 38 bcm to 60 bcm.

Russia is locked in standoff with the West over the annexation of Crimea and manipulating separatist movements in Eastern Ukraine. Although it had used its gas supplies to Europe as a leverage against individual countries separately, the Ukrainian crisis has produced a more or less unified stance of the European importers against Russia. Even the countries who rely 100% on Russia for its imports, such as Baltic states and may be reluctant about sanctions against Russia from economic standpoint, they do show political support for policies against Kremlin’s mistreatment of its neighbors.

Russia does need its European consumers as much as they need Russian gas. Kremlin can be subject for more severe actions from unified Europe if it attempts to rise gas prices as a way of leverage over selected countries. Sanctions may gradually crumble Russian economy and hence, Putin’s hold to power. What’s more it may turn into another “December 25, 1991”, the day Putin called “the greatest geostrategic catastrophe of the century.”

On the precipice - a reaction to Russian foreign policy in Ukraine