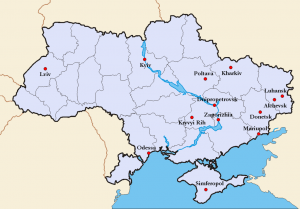 At least one government soldier was killed Wednesday as fighting over the airport in Ukraine’s eastern city of Donetsk continues between the army and independence-seeking insurgents, a military spokesman said Thursday.

“Over the past 24 hours, Ukrainian troops suffered losses: one person was killed and 18 others were wounded,” Andrei Lysenko, spokesman for the National Security and Defense Council, told reporters during a news briefing.

Lysenko said that government troops repelled four attacks on Wednesday and managed to keep the airport “under the control of Ukrainian forces.”

The insurgent leadership has not commented on their casualties, while the rebel-run Novorossia news agency said that insurgents took control over the large part of the airport following the fighting.

Earlier on Wednesday, Ukrainian Interior Minister Arsen Avakov said that 68 employees and 66 volunteer fighters from the National Guard force have been killed in fighting rebels since mid-April.

At least 3,000 people have been killed and around 8,000 wounded in the bloody conflicts in eastern Ukraine, according to UN estimates.

On Sept. 5, a ceasefire deal was inked by the representatives of Ukraine’s government and the insurgents, in a bid to pave the way for a solution to the crisis.

Statement by the White House on Australian, Danish, and Turkish decisions to authorize military force against ISIL