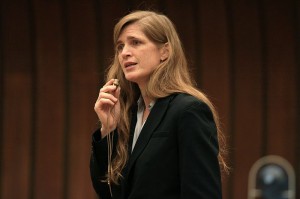 The following are the remarks by Samantha Power, U.S. Permanent Representative to the United Nations at a Security Council open debate on the Middle East:

“Thank you, Madam President. I’d also like to thank the Secretary-General for joining us today and for briefing us on his recent trip to the region.

We are living in a time of tremendous turmoil in the Middle East; a time that demands brave and decisive leadership by both regional leaders and the international community. Across the region, we see the need for hard choices. In Syria, the international community must summon the collective resolve to stop the Assad regime’s monstrous atrocities, as well as the horrors of ISIL, and find a political solution to the conflict. In Lebanon and Iraq, political leaders must strengthen the institutions necessary to honor the aspirations of their people and to defeat violent extremist threats. And Israeli and Palestinian leaders must recognize that there is no alternative to a negotiated peace and invest the political will to build it. I will discuss each of these critical issues today, in turn.

We have seen how failures in leadership can help foster the conditions in which extremist groups thrive. By failing to make the hard choices necessary to address the grievances of its Sunni population, Iraq’s former leaders helped to create conditions that ISIL exploited. The consequences have been horrifying. To cite just one example: earlier this month, ISIL announced strict rules on what can be taught in universities in Mosul, one of the cities it now controls. When Iraqi university professors rejected these restrictions and boycotted, ISIL declared that any professor who did not return to work would be executed.

More than three years ago, Bashar al-Assad lost legitimacy to lead when he responded to peaceful protests with brutal violence. Atrocities committed by his regime – atrocities of the kind and scale this world has rarely seen – played a key role in spurring the emergence of ISIL and other terrorist groups, and Assad’s indiscriminate attacks on his own people continue to this day.

Last month, the OPCW released its second report, which found “compelling confirmation that a toxic chemical was used as a weapon, systematically and repeatedly,” in three opposition-held villages in northern Syria. The OPCW concluded with confidence that chlorine was used. Witnesses described the attacks as being carried out by helicopters, which only the Assad regime possesses.

The consequences of Assad’s actions have been staggering. More than 200,000 Syrians killed. Nearly 11 million Syrians in need of humanitarian assistance. And yet, despite the valiant efforts of international humanitarian groups, UN agencies, and others, the Assad regime is deliberately obstructing the delivery of crucial assistance to millions of people in dire need. The regime declares itself the antidote to the horrors of ISIL, but its chemical and barrel bomb attacks, its use of starvation as a tool of war, are every bit as indifferent to the fate of innocents and every bit as grotesque.

One community subjected to the Assad regime’s merciless attacks has been Palestinians in the refugee camp of Yarmouk, which the regime has sealed since July 2013. The 18,000 residents who remain there have been relying on untreated groundwater and a single well for drinking water for nearly a month. Just yesterday, a spokesman for UNRWA issued a statement that began: “UNRWA was not cleared to distribute humanitarian assistance in Yarmouk today, 20th of October.” The day before, UNRWA’s statement began: “UNRWA was not cleared to distribute humanitarian assistance in Yarmouk today, 19 October.” UNRWA notes that since July this year, there has been a steady and significant decline in the quantity of food and other essential items, such as medicine, that the Agency has been able to offer to the Palestinians in Yarmouk. That on any day – let alone so many days – the Assad regime is not allowing aid to flow to the Palestinians suffering in Yarmouk shows extreme cruelty. The international community must be more vocal in its condemnation of these unspeakable tactics. And when the Syrian government hails its leadership on behalf of the Palestinian people, they should be reminded by all of us of the people living in Yarmouk.

Three million Syrians have fled to neighboring countries to escape the regime’s and extremist groups’ violence – up to 80% of them women and children. The threat posed by ISIL is felt across the region, but especially in Iraq and Syria. And foreign fighters and Syrian nationals who have been recruited and trained to fight in ISIL and other terrorist groups pose a threat to countries far from the battlefield.

Among the countries most severely impacted are Iraq and Lebanon. For example, 180,000 Iraqis fled the city of Heet, in Anbar province, as it fell to ISIL in recent weeks. They are among an estimated 1.8 million Iraqis displaced just this year. Lebanon has taken in 1.2 million Syrian refugees – over a quarter of the country’s population – placing immense pressure on its already strained resources.

We know what we must do: we must defeat ISIL and other terrorist groups. We must hold accountable all those in the Assad regime responsible for its widespread atrocities. And we must mitigate the suffering of the Syrian people. But we wholeheartedly agree with the Secretary-General that a political solution is absolutely essential to address the root causes of extremism in Syria, and to address the legitimate aspirations and grievances of its people. A political solution is not an enshrinement of the status quo. The majority of Syrians will not accept being ruled by a regime that has used sarin and chlorine to suppress its own people.

We commend the efforts of UN Special Envoy for Syria, Staffan de Mistura, who is working urgently to build support for a political solution by engaging multiple stakeholders. The Special Envoy met with Iran over the weekend and is meeting with Russia today – countries whose influence will be critical to reaching this long-sought solution.

Given the massive suffering that Syria’s crisis is causing, and the threat it poses to our collective security, leaders in the region must be part of these efforts to forge a political solution. But regional leaders also must address problems closer to home, which impact the rights of their people and are a source of the suffering, disenfranchisement, and intolerance that feeds groups like ISIL.

Yet, some leaders still choose to put short-term interests ahead of the tough decisions needed to best serve their people. Others take divisive steps when they could instead build consensus. The international community stands ready to help address the region’s challenges, but we need partners to exert the political will and courage to seek real solutions.

In Iraq, newly elected leaders must break from the sectarian style of leadership that defined the tenure of the Maliki government, and build institutions that represent the whole nation, rather than advancing one group’s interest at the expense of another’s.

In Lebanon, the position of president has been vacant for nearly five months, during a time when the country faces considerable security, economic, and humanitarian challenges. Lebanon’s political leaders must come together urgently to select a president.

We have seen leaders within these countries willing to choose unity over division and to make great sacrifices for their people. In August, the Lebanese Armed Forces and Internal Security Forces fought bravely to defend the city of Arsal from extremists. They served and died for their country – not for any one religious sect. In Iraq, Prime Minister Abadi is taking steps to form a more inclusive government, establishing the country’s first complete cabinet since 2010. He is also moving toward decentralizing power and granting greater authority to provinces.

Real leadership is also required to advance Israeli-Palestinian peace. The most recent wave of violence was devastating, both in terms of its enormous human toll and because it was avoidable. Preventing another round of violence requires leaders who are willing to make difficult choices and commit to the hard work of negotiations.

We commend Egypt for helping broker a ceasefire agreement. The Gaza reconstruction conference raised $5.4 billion and reaffirmed the international community’s commitment to rebuilding the lives of Palestinians in Gaza who have suffered so much during and since the recent crisis. The United States is providing $212 million in assistance to the Palestinian people for relief and reconstruction, atop the $118 million announced in September.

Of course, as has been said, aid and assistance cannot produce peace in the Middle East – leadership and compromise are needed. For reconstruction not to be required again in the future, there must be a real change on the ground. Even the most durable of ceasefires is not a substitute for real security for Israel or for an independent state for the Palestinians.

This is only more difficult to achieve when both sides continue to take actions that may be politically popular with domestic constituencies, but that come at the expense of advancing the cause of peace. We continue to urge all parties to refrain from such actions, including unilateral steps at the United Nations, Israeli settlement activity, and provocations at the Temple Mount/Haram al-Sharif, where we urge all sides to respect the status quo of this holy site.

The United States remains fully committed to achieving a negotiated final-status agreement allowing two states to live side-by-side in peace and security. This is the only viable way forward, and if the parties are willing to go down this path – and are genuinely dedicated to the hard work of peace – we stand ready to support them.

Together, we can and we must support those taking the courageous steps to strengthen the Middle East in these immensely troubling times. The cause of peace in the region and the dignity of its people depend on it.