The DMCA criminalizes the production and dissemination of technology, devices, or services intended to circumvent measures (commonly called digital rights management) that control access to copyrighted works. Further, the DMCA also criminalizes the act of circumventing any access control, even if there is no actual infringement of the copyrighted material itself, i.e., providing a mere link to a third site where suspected copyright material exists is criminal.

The Act has extended the reach of US law beyond its traditional geographical jurisdiction. Moreover, the Act has given copyright right holders a “lethal weapon” to utilize against parties who allegedly breach their claimed copyright. That is, the ability to claim copyright breach directly against any individual. Further, the Act enables copyright holders to force ISPs and OSPs to take down any identified alleged infringing material immediately from any internet site.

However the Act doesn’t give respondents any recourse against a DMCA takedown notice before any material is taken down by the ISPs and OSPs.

The rules and procedures of this process are prescribed under section 512 of the Act. ISPs and OSPs are given immunity from prosecution from both the copyright holders and respondents to takedown notices, if they strictly adhere to the takedown and counter-takedown notice procedures prescribed in Section 512.

This ‘safe harbor’ provision gives ISPs and OSPs incentive to cooperate with copyright holders who are in the majority corporations. Section 512 even exempts ISPs and OSPs from ‘good faith’ in the removal of any material, i.e., they may know the takedown notice is flawed in some way, providing the procedures are followed. In effect ISPs and OSPs become the agents of the copyright holders and aren’t obliged to consider the interests of their users, except through facilitating the counter-takedown notice procedure.

As mentioned above, the material identified in any takedown notice must be removed from the site identified. The respondent can only respond to the copyright holder through issuing a counter notice which identifies the person who put up the material, submits to the jurisdiction of a US court, and subjects the respondent to the laws of perjury in the response. It is the responsibility of the ISP or OSP to pass on the counter notice to the copyright holder and if legal action hasn’t been taken against the respondent in the takedown notice within 10-14 days, the ISP/OSP may reinstate the original material to their website.

If a respondent of a DMCA takedown notice takes a copyright holder to court, there is no guarantee that the issuer of the notice will submit itself to US law, unless it is already a US legal entity. Even within the US itself, some issuers of takedown notices have escaped jurisdiction of the US court system.

Further, the issuer of a DMCA takedown notice bears little responsibility for false notices. Although Section 512 (f) makes the issuer of any false notice liable for damages, the cost, time and effort to take a copyright holder to court for issuing a false notice according to current case law in the United States would most likely only compensate the respondent for his or her legal costs in direct relation to the takedown notice and minimal damages.

There is nothing within Section 512 that restrains copyright holders from issuing DMCA takedown notices through the principle of fair use. The legally enshrined principle of fair use allows for the copying of small amounts of material for comment, criticism, or parody. Such use can be done without the need to get permission from the copyright holder. Section 1201 (c) states the underlying substantive copyright infringement rights, remedies, and defences, doesn’t allow the use of fair use for defence of a DMCA takedown notice. Fair use is not exempted as a circumvention action and has thus not exempted from criminality under DMCA.

This weakness in the DMCA has allowed for the exponential growth of DMCA takedown notices since the Act became law almost 18 years ago.

Earlier this year Jennifer Urban and Brianna Schofield from University of California, with Joe Karaganis of Columbia University found in a 160 page in-depth study looking at 100 million notices, that more than 32% of DMCA takedown notices were either flawed or had characteristics which raised questions about their validity. This equates to more than 35 million notices. This somewhat agrees with Twitter’s own data indicating that around 33% of notices it receives are ineffective. WordPress found 60% of the DMCA takedown notices it receives as being ineffective.

One very recent case that illustrates the above issues and highlights several sinister aspects of DMCA abusers’ behaviour relates to the International Olympic Committee (IOC) and its Legal Director Howard Stupp. Howard Stupp is well known for his vigilance in protecting IOC intellectual property, and even made a ban on the use of short GIFs on social media during the recent Olympic Games.

Stupp instituted an automated system which systematically searched the internet for key words. The system was so sophisticated that winners’ names were added as key words to pick out new postings during the games. However what was apparently absent was any human interface to ensure that the system didn’t mistakenly highlight postings that didn’t breach IOC copyright. As a result in one such case, a DMCA takedown notice was sent to Twitter claiming a posting had breached IOC copyright by showing a GIF of the recent games, when in fact the Tweet was posted weeks before the games and GIF was of another sporting event not under the jurisdiction of the IOC. 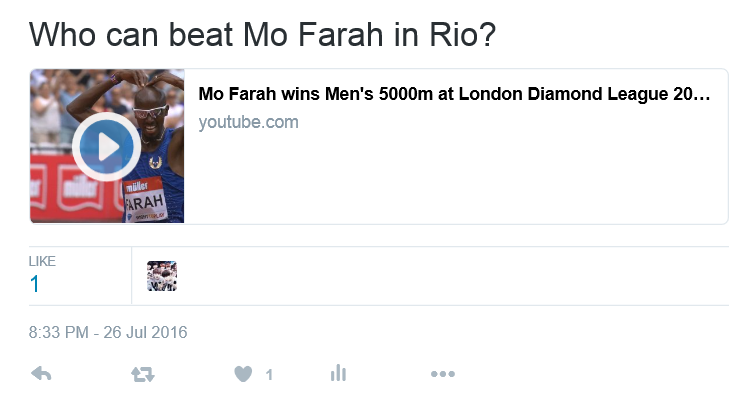 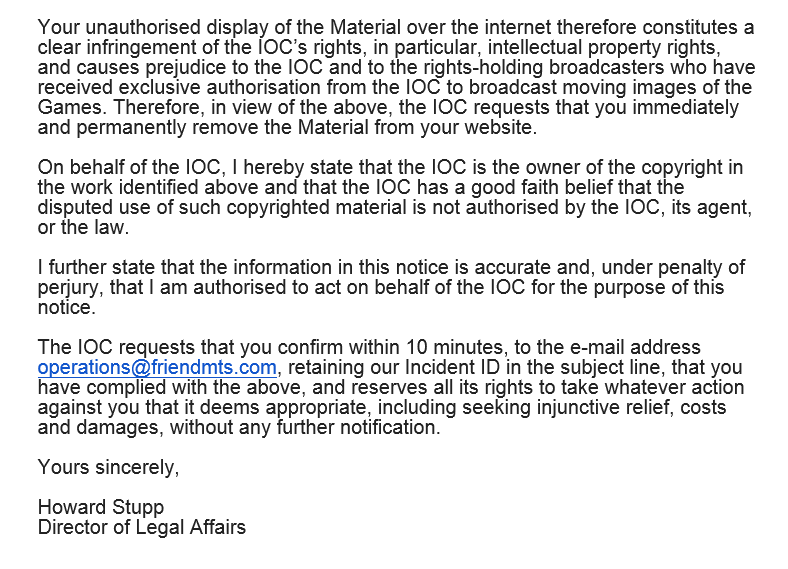 Like the example above, the use of automated systems leads to questions about accuracy and fairness in due process of copyright holders issuing DMCA takedown notices. Human interface is required to ensure copyright holders exercise a duty of care. Automated search systems have turned the DMCA takedown system into a massive fishing expedition where individuals who breach copyright may be caught along with a large group of innocent individuals.

In the case above, the recipient of the DMCA takedown notice issued by the IOC attempted to contact the organization through the email given in the takedown notice (The issuer of a DMCA notice doesn’t have to state their address like the requirement for respondents to do so) to point out their mistake, but this was to no avail. Repeated emails were just left with silence.

The fact that the IOC refuses to enter into any correspondence with respondents indicates the principle of ‘good faith’ is not being adhered to.

The IOC, like many other corporations not registered in the United States are difficult to actually locate and thus beyond the jurisdiction of US law. This makes it extremely difficult to take any legal action against parties who issue false DMCA takedown notices. The DMCA takedown notice system is allowing people like Howard Stupp to act without any duty of care and legal responsibility.  The IOC must be aware that some of its DMCA are false through mistaken identification of content (i.e., no one has checked the links the automated system has identified).

Organizations like the IOC will continue to issue frivolous takedown notices in a contemptuous and arrogant manner, and ISP/OSPs like Twitter will continue to support large corporations against their own users because of the nature of the current takedown and counter notice procedures in section 512. These are all massive abuses of the system which must be corrected.

The safe harbour provision of Section 512 makes the ISP and OSP willing collaborators with organizations which use DMCA takedown notices as a tool for other agenda that the Act was not intended for.

This is a denial of natural justice where the takedown and counter notice procedure assumes guilt before innocence, contrary to common law.

With the large number of DMCA takedown notices coming in to ISP/OSPs, it is time consuming and costly for these organizations to deal with each individual notice. They are doing the work of copyright holders and bearing all the costs involved.

The unbalanced onuses placed upon the recipient in filing a counter notice, and fear of the costs of defending any potential action in a court of law is the probable reason why there are very few counter notices. DMCA takedown notices, as can be seen by the example above are intimidating to many people who receive them. Further, liability is unbalanced and favours copyright holders. Many corporations don’t fear suits as they aren’t within the jurisdiction of a US court unlike the respondents who must formally put themselves under US court jurisdiction in filing a counter notice.

Large corporations like Sony, Disney, Comcast, Viacom, and others used automated systems to issue DMCA takedown notices which often misidentify material. This is an injustice upon innocent parties who are at risk of having their social media accounts closed if they receive three takedown notices under the multiple offender provision of the DMCA.

The DMCA takedown notice procedure has harassed many internet and social media users, silenced critics of corporations, and disrupted people running blogs. Section 512 (f) is toothless in restraining corporations using automated software and takedown notices go on ‘fishing expeditions’ to seek out copyright infringers. Innocent peoples’ rights are being violated and in some cases damage done to them where no practical recourses exist to remedy the injustice. The Howard Stupps of the corporations are free to run their agendas disregarding the principles of ‘good faith’ and fairness. They appear immune from responsibility for their reckless actions.

Section 512 has failed to protect people from false takedown notices and allowed the DMCA to be abused by corporations for their own ends. The use of the DMCA to silence critics and eliminate articles written by journalists in all probability if challenged in a US court could even be found unconstitutional due to its incongruence with the 1st Amendment that guarantees freedom of speech and the press.

Let’s hope the US Copyright Office corrects these shortfalls of the DMCA in its current review of the legislation and considers the introduction of statutory damages and/or bonds to decrease the issuing of false notices.

Italy and Egypt: from Regeni to Libya, the difficult path towards normalization