Approaching the polls February 15, 2017, competition has been increasingly rigorous among the three candidates who are contesting in the Jakarta Gubernatorial Election (Pilgub) 2017, namely, incumbent duet  Basuki Tjahaja Purnama-Djarot Saiful Hidayat (Ahok-Djarot), Agus Harimurti Yudhoyono-Sylviana Murni (Agus-Sylvi), and Anies Baswedan-Sandiaga Uno (Anies-Sandi). Many said that the fight in Jakarta gubernatorial election this time is a ‘proxy war’ of the rivalry among the political elites Megawati Soekarno Putri, Susilo Bambang Yudhoyono and Prabowo Subianto. Ahok-Djarot is supported by the Indonesian Democratic Party of Struggle (PDIP), the People’s Conscience Party (Hanura), The Functional Group Party (Golkar), and the National Democratic Party (Nasdem). Agus-Sylvi is supported by the Democratic Party, the United Development Party (PPP), the National Awakening Party (PKB) and the National Mandate Party (PAN). Whereas Anies-Sandi is supported by the Great Indonesia Movement Party (Gerindra) and the Prosperous Justice Party (PKS). Presently, the Jakarta gubernatorial election is entering the stage of formal debate among the candidates that will begin on January 13, 2017. In the previous informal debate that was aired by some private televisions, the Anies-Sandi duet looked dominating over other candidates.

From the results of survey conducted by SPIN (Survey & Polling Indonesia) during August-December 2016, it was revealed that Ahok is still considered by the public as the figure who best understands the problems in Jakarta (73%), compared to Anies (40%), or Agus (33% ). The pair of incumbent governor Ahok-Djarot has had the advantage in selling the programs they have achieved.

On the other hand, his two contenders focused on issues that have not been covered yet by Ahok-Djarot. Anies-Sandi pairing, for example, developed issues of job availability, basic stuff price control, and clean water availability in Jakarta. These issues were raised as a criticism against Ahok’s policies that were more physical,  rather than human oriented. Anies-Sandi also intends to stop the policy on reclamation in Jakarta Bay which has been being contested by many environmental activists. Meanwhile, Agus-Sylvi’s programs highlighted more the provision of financial assistance, such as the granting of Rp 5 million per poor family, or Rp 1 billion per RW (Rukun Warga) in Jakarta. It is obvious that the 2017 Jakarta gubernatorial election will be the momentum to evaluate the incumbent governor’s performance and to draft the overall improvement.

Significantly, the trend of favorability to Ahok as the incumbent has decreased. Only as low as 30% believe that Ahok deserves to be re-elected Governor, while 55% want a new figure for Jakarta governor. Ahok’s positive popularity is equal to his negative popularity. Negative sentiment against Ahok is also prevalent in various segments of Jakarta voters due to the alleged religious defamation case which has resulted in a commotion and protest by Muslim community. Presently, Ahok is the accused (defendant) on the religious defamation case before the court for quoting a Quranic verse in surah Al-Maidah 51 during his working visit in the Thousand Islands. As at January 10, 2017, the case of alleged religious defamation by Ahok was entering the fifth trial round. 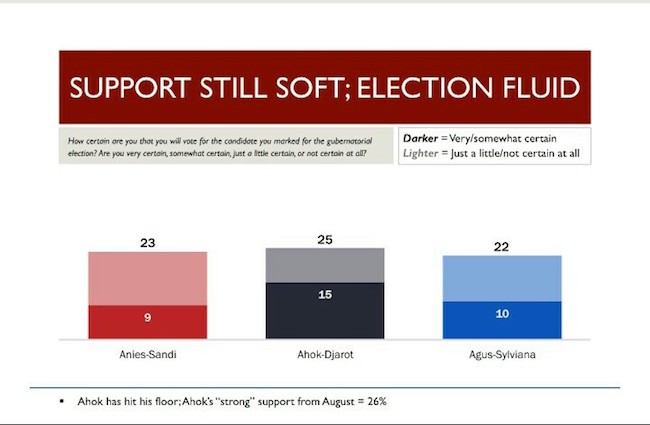 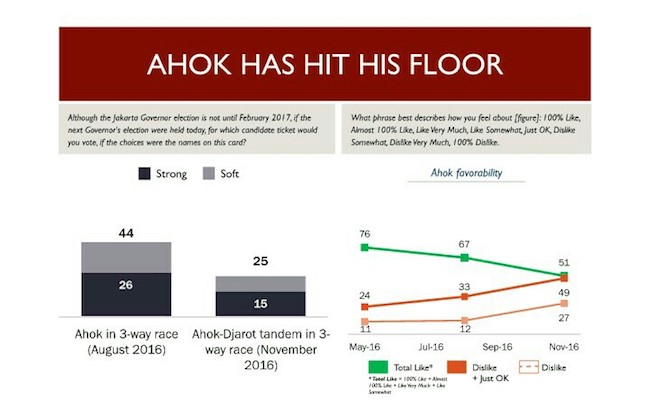 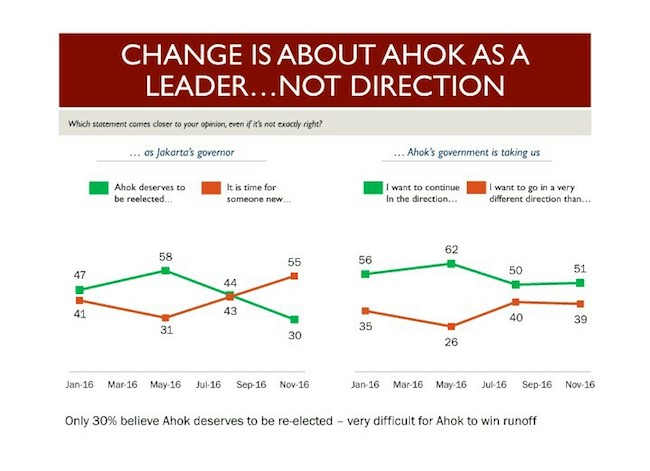 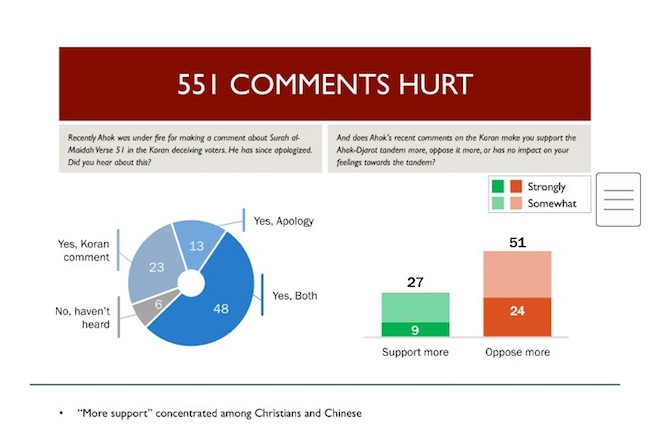 Despite, in one side,  majority of Jakarta people being rational voters, but on the other hand they are in fact unable to escape from the political choice based on primordialism. The anti-Ahok struggle is stronger due to the religious motive. Ahok is at a disadvantaged position because he comes from minority ethnic and religion. Ahok is now in trouble with a sensitive issue of religious defamation. His status as the accused becomes a psychological barrier for the public from reelecting him. Primordial identity has been used for political benefit and gaining support. Ahok’s weakness is none of Muslim-based parties supports him. However, for Ahok’s supporters, he was merely a victim of religion politicization. Although it is possible, but somewhat difficult, for Ahok to rebound his electability within this remaining one month. 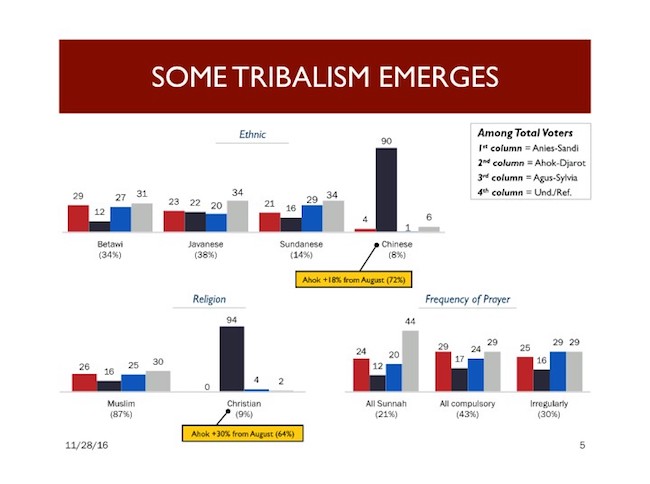 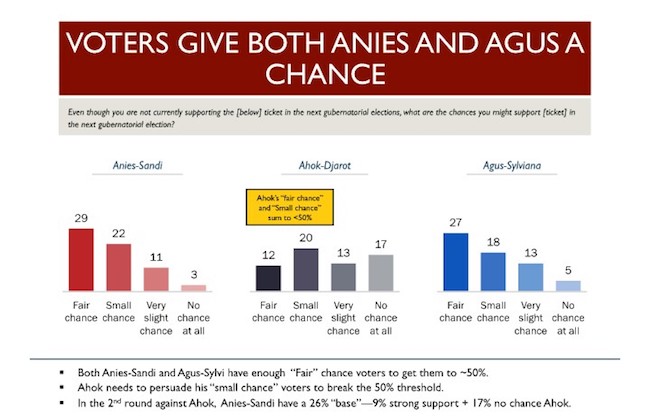 In contrast, Anies Baswedan is seen as a figure who is more caring to the Jakarta people (57%), than Ahok (52%), or Agus (47%). Anies is also considered more as representing the entire strata of Jakarta people (52%), compared to Ahok (41%), and Agus (39%). Jakarta’s public is indeed expecting a new leader who has respect and integrity, represents all strata of the Jakarta people, capable of creating jobs, and has the ability to improve education of his residents.

Agus Harymurti Yudhoyono is today very popular as a candidate for Jakarta Governor. His personal branding as a young man and handsome has heavily attached in Jakarta’s people. By hearsay, human is an eye animal. A candidate who is physically attractive may earn 3 times more votes, particularly from the first-time and female voters segment. This is because the first impression that begins from physical appearance of someone is usually difficult to change. Theoretically, one’s first image is usually based on visual aspect. Furthermore, human’s mind is limited, thus the voters’ perception tends to be filtered by a physiological filter. This is the advantage of Agus Harimurti Yudhoyono that is also possessed by Sandiaga Uno.

This differs with Ahok who has controversial leadership style in the public eye. The voters in Jakarta presently give Anies Baswedan and Agus Harimurti an opportunity to be the new governor of Jakarta. However, Anies Baswedan is very vulnerable to be rushed by negative religious issues, such as allegation as a follower of Shia or Liberal Islam. Whereas Agus Harymurti Yudhoyono is deemed lack of experience and as a part of a political dynasty or a son of former President Susilo Bambang Yudhoyono.

In 2017, the Jakarta people will predictably have a new Governor on February 15. He will be either Agus Harimurti Yudhoyono, Anies Baswedan, or Djarot Saiful Hidayat. This means, if the incumbent Ahok-Djarot pair even wins, there will be very little chance for Ahok to be the Jakarta Governor for the second period because of his accused status and potential imprisonment related to the religious defamation proceeding to which he is now subjected. Ahok will remain able to survive if there is a gigantic power intervening his case. However, this may trigger a national political uproar that is even greater. Jakarta Gubernatorial Election 2017 indeed correlates with the process and decision of Ahok’s court trial that is  still current.

Approaching the voting day February 15, 2017, each of the candidates will be campaigning more actively to grab undecided votes and swing voters, particularly of first-time voters, Muslim voters, Javanese voters, and the urban middle class. In the capital Jakarta, social media can be used as a tool to grab supports and influence these voters. However, undeniably, the Ahok’s religious defamation case indeed gave benefit and opportunity to Anies-Sandi and Agus-Sylvi pairs to win on the Jakarta gubernatorial election on February 15, 2017. Even if Ahok loses the election, the public will still look at Ahok’s performance that has been deemed good as a work barometer for anyone who will succeed him, no matter whether he is a polite Muslim or not.

The U.S. is a failed democracy

The U.S. is a failed democracy

The path to peace in Kashmir: Will Trump be pivotal?