An Energy Security Action Plan (2005-30) has been formulated to convene the necessities of Pakistan’s visualization 2030 for consistent and worthy power supplies as well as to make sure that power insufficiency does not turn out to be a limitation in growth. The major goal of the power sector progression is to augment energy supply in the course of the best blend of all assets together with hydropower, oil, nuclear, gas, coal, as well as renewable power like wind and lunar. It is intended to optimize use of the state’s original reserve to lessen reliance on foreign fuel. According to the communal sector reserve restraints, an imperative focal point is also making a setting beneficial to the contribution of the private region, both intercontinental and national.

Till 2030, the total energy utilization is predictable to mount 7 times from fifty million tons of oil equal (MTOE) to 360 MTOE. The obligation for power production would augment more over 8 times from 19,540 MW in the year 2005 to 162,590 MW by 2030. It is accepted that Pakistan is going to face insufficiency of useable as well as inexpensive power and more competent usage of energy is enormously crucial. While enhancing competence, a foremost swing is intended towards nuclear, coal as well as renewable over the continuing time period. The distribution of coal within the power combination is intended to be augmented from the present almost 6% to 19% till the year 2030. Nevertheless, the energy blend can only be altered steadily in an extended time span.

In the context of energy, the document proposes some of the most far-reaching and comprehensive policy measures ever introduced in Pakistan—from full-scale sectoral deregulation to governance reform and the phasing out of many subsidies.

The suggestion is to augment power supply via a finest blend of supplies together with gas, hydropower, oil, coal, nuclear as well as renewable power. As per the outcrops of the plan, organic gas will preserve the utmost share of the energy pie chart in 2030 at 45%, although its division is steadily anticipated to turn down to 18.5%. Coal, whereas, will see a constant boost, with the second biggest share in the energy pie at 19%, as an alternative to oil. Hydropower might go down from the 3rd place that it embraces at present to 4th place with a division of 10.8%. Nuclear energy and renewable power would rise up their part with 4.2% and 2.5%, correspondingly. Thus, it is apparent that there might be a raise in the percentage of nuclear, renewable energy and coal in the general power blend in the long run. This makes it obvious that Pakistan’s aim to optimize the usage of local reserves and to lessen the dependency on oil imports. 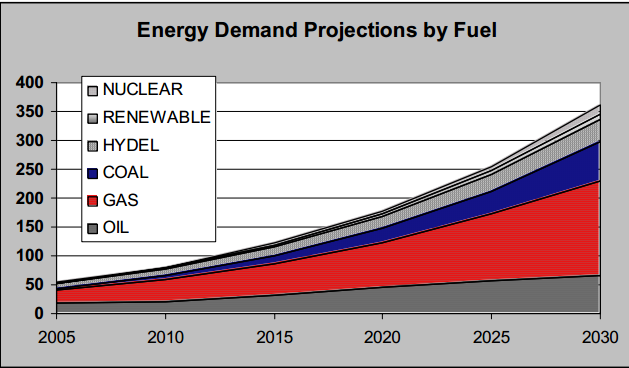 Keeping in mind the task, Pakistan’s fourth Nuclear Power Plant has started supplying electricity to the national grid on trial basis. Chashma Nuclear Power Plant Unit-3(C-3), situated near Mianwali, has been formally connected to the national electricity grid. After completion of several safety related and functional tests, the C-3 will attain full capacity of 340 MWe in December, when inauguration ceremony will be held.

The new power plant C-3 will add around 315 MWe net electricity to the system. The next unit of the nuclear power generation C-4 at Chashma will start its operation in early 2017.
The other two larger capacity nuclear power plants (K-2 & K-3) at Karachi are also under construction and will be completed in 2020 and 2021 respectively. These plants will further add around 2100 MWe net electrical power in the system upon connection to the national grid. Although the contribution from nuclear energy is small but it’s consistent and reliable comparing with the other sources like renewable.

Shahzadi Tooba Hussain Syed works at Strategic Vision Institute in Islamabad. He can be reached at Shahzadisvi@gmail.com