A weak U.S. dollar can have good and bad implications. But the reasons behind a weak dollar can possibly involve serious long-term consequences.

Currency markets are quite often volatile and have been known to experience wide gyrations. The ups and downs of a nation’s currency can have major macroeconomic implications. The U.S. dollar is not immune to these gyrations and the economy of the United States is deeply affected by the appreciation or depreciation of its currency. The problem is that with the Trump Administration and specifically the words of Donald Trump along with the uncertainty of his policy proposals has caused the dollar to weaken on world markets and Inducing a great deal of angst among investors.

Reasons the U.S. Dollar is weak

According to the U.S. Dollar Index (DXY), which tracks the dollar’s strength against a basket of different currencies, it is currently at 93.24. Comparing this figure versus January 2017, there has been a drop from 103.50 to 93.24. Going back further to 2002, the U.S. Dollar Index stood at 120.00. The Bloomberg Dollar Index Spot has recorded a year-to-date return of −8.76%. There are numerous reasons for this drop in the dollar’s value for 2017.

A key reason is that interest rates in the United States are still low. The Federal Reserve Bank has raised rates twice, so far, this year, and there is speculation that Chairperson Janet Yellen will announce another increase in her speech at the Fed’s annual economic meeting at Jackson Hole, Wyoming, on Friday. Even if the Federal Reserve were to raise rates again this year, it may not be enough to prop up the dollar’s value relative to other currencies. Investors and savers will still probably take their money to other banks around the world where rates are higher, thereby dumping dollars and purchasing other currencies.

There is also the strengthening of the European Union’s (EU) macroeconomy which is drawing investor’s funds. The EU’s economy is getting stronger, led by Germany and despite Brexit. The Italian economy is showing signs of improving and policymakers are making a serious effort to save their banking industry such as helping Banc Monte Paschi di Siena. Even Greece is starting to show signs of bouncing back as it is improving its debt situation. Policies put into place a few years ago by European Central Bank President Mario Draghi is now coming to fruition and the euro has gathered strength as investors are purchasing the EU’s currency. So far for 2017, the euro has risen 12 percent against the dollar. Draghi is trying to downplay the euro’s recent upsurge in order to keep the EU’s strengthening economy going.

But it is not just the EU that is showing economic strength. According to a recent report by the Organization for Economic Cooperation and Development (OECD) all of the 45 nations that they monitor will see their economies grow in 2017, while 33 will accelerate from 2016. The last time this growth event occurred was 2007 and this is the most nations that are accelerating economically since 2010. The International Monetary Fund projected in July that global economic output would increase by 3.5 percent in 2017 and see further growth in 2018 of 3.6 percent. This is a very good sign for world economies as they seek to finally rebound from the Financial Crisis of 2008-2009. But this also means that investors have more to choose from when deciding where to place their funds in order to obtain a better return on their investment. It also means investors will sell their U.S. dollars in order to invest in Japan, China, or Africa rather than in the United States. The bottom line is that due to a strengthening of the global economy, it could mean the dollar may further weaken as investors see better opportunities elsewhere.

If there is one key reason why the dollar is weak is Donald Trump’s rhetoric. He has been calling for a weak dollar during his presidential campaign as he charged China with lowering the yuan’s value. Even after his election, Trump has repeatedly called for a weak dollar in order to help improve U.S. trade with other nations and as a way to build up American manufacturing.

The “Trump Trade” started in early November 2016 after the presidential election as currency traders felt that there would be quick legislation passed with a Republican Congress on such items as healthcare, tax reform, cuts in regulations, and an infrastructure program. For currency traders, the future seemed bright and the dollar was a good buy. But now things have gone about-face and these same traders are more willing to hold the euro or the Japanese yen.

For example, Trump and the Republican Congress could not work out a plan to repeal and replace the Affordable Care Act or Obamacare. When that may occur is anyone’s guess and the currency markets reacted accordingly. It is now uncertain if there will be any tax reform legislation or tax cuts passed in 2017. Trump promised to spend $1 trillion on infrastructure over the next ten years. However, Congress has not seen one proposal or spending bill enter its halls. The dollar showed further slippage due to these inactions by Trump and the Republican Congress. Not helping matters are the special counsel’s investigation into possible ties to Russia by the Trump campaign in 2016. Also worsening currency investor’s outlook on the dollar is Trump’s continuing feud with Republican senators and the party.

A weak dollar could help improve exports for the American economy and ultimately create more jobs. But the real problem occurs when investors feel the dollar is too low and will not provide any substantial return in the long run. The foreign exchange markets could be perceived as how the rest of the world views a nation’s global standing. Shahab Jalinoos, head of global FX strategy for Credit Suisse Group AG put it best when he stated that, currency “tells you how a country is perceived relative to every other country.” 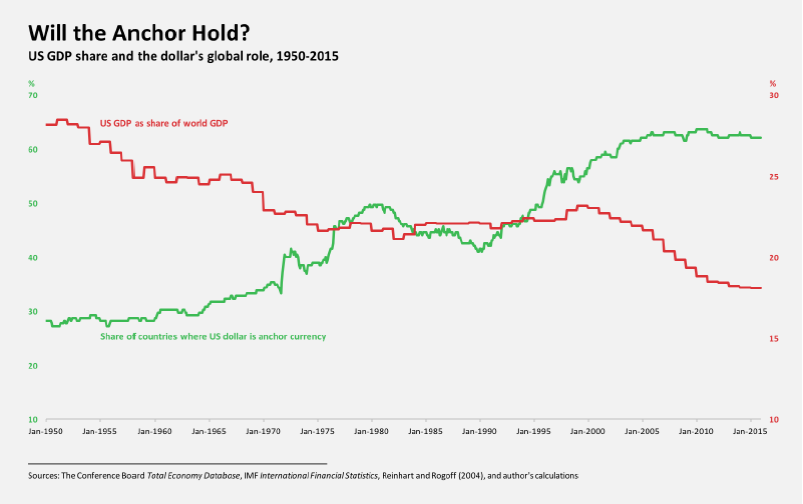 The American economy has been rebounding from the Financial Crisis of 2008-2009 and more economic growth is expected in the near future. Therefore, the American economy can tolerate a weak dollar for now. But if there is another recession in the next two to three years, or the investigation of the Trump Administration becomes much more serious, or still no major legislation is passed by Congress, then the dollar could really sink to new lows that could have dangerous financial consequences since it is perceived as a global “safe haven” and reserve currency.

USA’s Afghanistan policy and what it holds for India