Cryptocurrency offers investors an alternative that has the potential for great returns but also high risk. The real question that should be on the minds of investors and policymakers is: Is cryptocurrency here to stay?

There are always investors looking for the next big “thing” that will give them the extraordinary returns they seek. This means beating the Dow or the S&P 500 or outperforming hedge funds and that the risk involved will be either quite minimal or non-existent. From a financial perspective, this investment philosophy can be viewed as unrealistic and quite dangerous since it can possibly lead to great sums of money chasing an investment that could cause financial markets to crash. There are investment professionals who feel that cryptocurrency is one such investment vehicle. Certain purveyors of the internet feel that cryptocurrency is the investment of the future and should be regarded as the perfect investment since it is free of government involvement. There are other investors who feel that there is a huge potential for a dangerous crash that will end up costing financial markets hundreds of billions of dollars. But the real concern should be: Is cryptocurrency for real or is it a passing fade having serious financial consequences in the event of a market crash?

A cryptocurrency, such as bitcoin or litecoin, is a digital currency created and managed through the mechanism of advanced encryption techniques commonly referred to as cryptography. Bitcoin is regarded as the forerunner of cryptocurrency since its precepts were established in a white paper authored by the mysterious Satoshi Nakamoto. Mysterious because it is still not known whether Nakamoto is a computer genius recluse, actually a group of individuals, or a pseudonym who would rather count his/her winnings in private. Bitcoin first appeared online in 2009 and eventually attracted a significant following in April 2013 when the price peaked at a then record of $266 per bitcoin after seeing a remarkable 10-fold rise in the preceding two months.

Bitcoin attracts investors due to lower transaction fees as compared to traditional online payment programs and is not operated by a centralized authority. Physical bitcoins do not exist, but rather account balances are recorded on a public ledger that exists in the cloud and can be verified by huge amounts of computing power. Bitcoins are free of government or financial institution backing, are not legal tender, and not regarded as a commodity. Rather, balances are maintained through the use of public and private “keys” that are actually long number and letter strings linked by mathematical encryption algorithms that created them in the first place. Public keys, which are analogous to a numbered bank account, act as an address known to others and which those individuals may send bitcoins. A private key is similar to a PIN for an ATM that must be hidden from others and can only be used for authorizing bitcoin transmissions.

The only way new bitcoins can be released to participants in the network is by solving complex mathematical problems. These participants solving the problems are known as “miners” and they receive new bitcoins at lower transaction costs. By solving this difficult mathematical problem, miners find a new block which is added to the blockchain and will be able to receive a reward of a few bitcoins. The dilemma is that as the problems increase in difficulty, the block reward diminishes. For example, in 2009, the block reward was 50 new bitcoins, but the reward has been decreasing every four years. Subsequent miners will need to have computing power that is more powerful since the mathematical problems will only become more difficult as time goes by.

If miners can accumulate more bitcoins, the financial rewards can be significant. For example, bitcoin had a market value of over $2 billion at its high point, but saw a 50 percent drop afterwards. In April 2017, a bitcoin was worth $1,223 which was a sizable rise from its price of $770 in late 2016. Bitcoin has been accepted by corporations such as Tesla, Expedia, and Microsoft for purchases of their products and services. Cryptocurrency is also used for sending money overseas and more users prefer it over Western Union since the transactions are often free or low cost. But bitcoin, despite the praises from its supporters is not perfect since there are possible dangers associated with it. 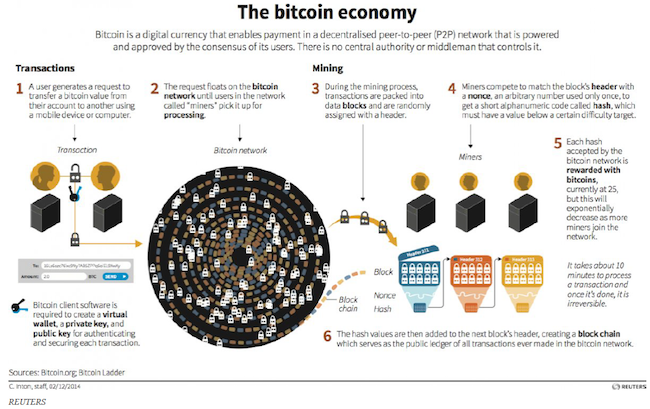 Financial and Economic dangers of Cryptocurrency

Cryptocurrency has its risks that potential investors must recognize or else they could stand to lose their financial investment.

Pseudonymous investors: While the blockchain that contains data such as the amounts and bitcoin addresses of every transaction, the business or personal information of the owners of the cryptocurrency is completely anonymous. The risk here is the mystery of who an investor is dealing with and where the funds are coming from. Could it be that a legitimate investor is transacting with an international drug dealer who is trying to launder money from overseas. Or that there may be a fraudster or scammer who is trying to sell false or possibly stolen bitcoins.  In July 2013, the Securities and Exchange Commission (SEC) brought a case against an operator of a bitcoin-related Ponzi scheme. The possibilities for dealing with unknown investors who have bad intentions are vast and dangerous.

Theft prevention: An investor must make every effort to protect their investment from theft of their private keys which, if they are stolen, can mean the complete loss of their bitcoins. The key idea to remember with bitcoins is that accounts are not insured nor protected by any governmental entity, so a hacker having extensive knowledge of bitcoin and how a blockchain works, can possibly steal an investor’s holdings if there is a break-in to an account. A determined and persistent hacker with bad intentions can break into an account and the true owner may never find out how it happened.

Volatility risk: A key problem with any market is the degree of volatility associated with it. Bitcoin is no exception. Since the bitcoin market is still relatively new, there is still an immense amount of uncertainty among investors and potential investors and the chances for wild price swings are too great. For example, in November 2013, bitcoin went from $200 to more than $1,200 in a short time-span. However, within three months it was selling at less than $600 and did not reach $1,200 again until March of 2017. Certain investors may try to “pump and dump”, that is pump up the price of a bitcoin and then dump it when it is discovered that the price is overvalued. While this can happen in many different types of investments, the bitcoin market is particularly vulnerable since it is unregulated and there are many new investors who may not be knowledgeable as to how bitcoin really works. Like any market there are pitfalls, but a seasoned investor will know what to look for and what to stay away from.

Regulatory risk: A big concern among investors globally is the impact of government regulation and possible moves to stop the bitcoin markets. Many investors enjoy the wheeling and dealing associated with bitcoin because there is little to no government interference nor regulations.  It is capitalism in its purest and simplest form. However, governmental organizations are starting to become concerned of the potential dangers of bitcoin transactions especially in the illegal drug trade and money laundering. For example, the New York State Department of Financial Services finalized regulations in 2015 requiring firms dealing with the purchase, sale, transfer or storage of bitcoins to record the customer’s identity, retain a compliance officer, and keep capital reserves. Any transactions of $10,000 or more must be recorded and reported. Recently, China took a huge and quite severe regulatory move against bitcoin investors: Chinese authorities decided to have a complete shutdown on the channels or markets for the purchasing or selling of virtual currency in China. This means that two of the largest cryptocurrency exchanges in China, OKCoin and Huobi, must cease operations in trading both bitcoin and the yuan by October 31st, 2017. Soon after the announcement, bitcoin’s price dropped 16 percent against the dollar, but subsequently rallied in the following days. While there is the possibility that Chinese bitcoin markets could open again, many investors are taking a wait-and-see attitude. 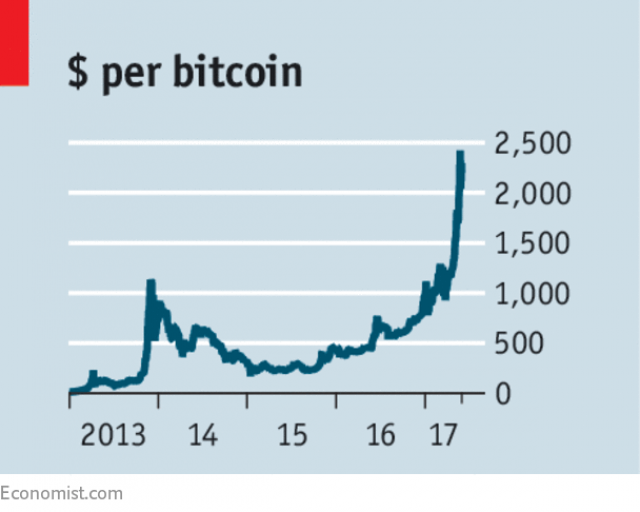 What will the future hold for cryptocurrency?

There are two possible scenarios for the future of cryptocurrency. One possibility is that bitcoin will be regarded as a legitimate financial security that both governments and the broad range of investors will accept and embrace as an investment alternative. This means the use of regulations for bitcoins and organized security exchanges in many countries. It would become a widely quoted investment that could be a holding in many pensions, mutual funds, and exchange traded funds.

The other possibility is that it will be shunned as an investment outlier and that nations such as China and the United States will clamp down on the trading of cryptocurrency to the point where it is regarded as part of the underground economy and a criminal activity. Jamie Dimon, the chief executive of JP Morgan, recently stated that, “It is worse than tulip bulbs” referring to the tulip market bubble in Holland in the 17th-century. He went on to say that, “It could be at $20,000 before this happens, but it will eventually blow up. I am just shocked that anyone can’t see it for what it is.”  As long as people such as Jamie Dimon, who called bitcoin a “fraud” which “will blow up”, have such a view it will have a very, very difficult time gaining legitimacy.

Gandhi’s truth: Ending human violence one commitment at a time