Under the tax plan proposed by the Trump Administration and Congress, there will be those who will see key financial benefits and those who will ultimately pay. The key is understanding the plan’s long and short-term ramifications.

The tax reform plan proposed by the Trump Administration is attempting to create economic growth, simplify the tax system, help corporations large and small, and put more money in taxpayer pockets. The Administration is taking a meat cleaver to many deductions considered sacrosanct for decades for the sake of simplicity and economic stimulation. The problem is that as the plan is making its way through the Congress, it is taking on a form in which certain groups will benefit from the tax reformation while others will pay a steep price. The key is to discern between the two.

A key group that will enjoy the benefits of a tax cut will be Wall Street. If the plan goes through as President Trump and the Republican Congress hopes, then this will be a $1.4 trillion tax cut benefiting corporations looking to keep more of what they have. For corporations, as

Morgan Stanley sees the situation, a corporate tax cut means that “given the procedural constraints for achieving a permanent corporate tax rate reduction, and the unattractiveness of a temporary corporate rate cut, our base case is that legislation will ultimately settle closer to a 25 percent rate . . .” Wall Street would love to see corporations with lower tax rates in order to have more merger and acquisition activity as well as higher dividends and increased number of stock buybacks.

Another group that will enjoy substantial benefits of the tax legislation will be the wealthy. They will have more to invest rather than spend and keep their wealth within their families. A key tax cut deals with the estate tax. As the law now stands, individuals with assets exceeding $5.5 million and couples with assets over $11 million, which is 0.2 percent of all estates, would see a substantial benefit.  According to the proposed House of Representatives version, the estate tax and the “generation-skipping tax” which imposes an estate tax if there is an attempt to bypass one or more aspects of the tax by having descendants receive the proceeds would be repealed. This will allow inheritances to skyrocket into the billions of dollars while tax revenues would drop by $240 billion in the next decade.

The wealthy could also see key benefits as high earning owners of pass-through businesses. Those owning partnerships, limited-liability companies, and S Corporations, in which they currently pay tax only on income at the business owner’s personal tax rate, would see a decrease in their rate from 39.6 to 25 percent. The income going from the business to the owner is known as “pass-through income.” A possible outcome of this cut would be that medical doctors working for a hospital emergency room would now want to be regarded as an independent contractor rather than an employee of the hospital in order to enjoy the lower tax rate. The hospital would enjoy a side benefit since they would not need to pay benefits nor Social Security taxes for the doctor’s employment. Currently, approximately 95 percent of American companies are set up as pass-through businesses.

Another substantial benefit for the wealthy under the proposed tax plan is the repeal of the Alternative Minimum Tax (AMT). The purpose of the AMT is the prevention of avoiding paying taxes entirely through the use of deductions and tax credits that the wealthy already enjoy. The problem is that the repeal of the AMT will mean the loss of $450 billion in tax revenue over the next ten years.

As stated by the Tax Policy Center, the top 1 percent households will enjoy an average tax reduction of $129,030 in 2018, see an increase in their after-tax incomes by 8.5 percent, and ultimately see a reduction of Federal tax payment. However, the Center estimates that, in general, Americans would only receive a 2.1 percent after-tax income increase.

Another big winner from the proposed tax revision plan would be corporations. Not only would the owners of “pass-through” firms see lower a lower tax bracket, but corporations, in general, would see their income tax rate reduced from 35 to 20 percent. While corporations would benefit from paying less taxes, according to the Tax Policy Center, tax revenue would be reduced by more than $2.6 trillion over the coming decade. Some businesses would see substantial benefits such as Morgan Stanley. The bank’s Chief Executive Officer stated at a conference in June that a 25 percent corporate tax rate would increase his firm’s profits by 15 percent, on the assumption of no alterations to their business structure. With a proposed 20 percent maximum corporate tax rate, Morgan Stanley’s gains would be substantial.

Corporations holding cash overseas would also benefit from the Trump tax plan by being able to repatriate their funds. Companies such as Apple, Microsoft, and Amazon.com, to name a few, combined hold between $2 to $3 trillion overseas since bringing the funds to the United States means paying over 35 percent in taxes. Apple, alone, is said to have $246 billion in profits overseas. However, Trump’s tax plan calls for “a one-time deemed repatriation of corporate cash held overseas at a significantly discounted 10 percent tax rate.”  This repatriation fee is a one-time event and may not necessarily mean that the funds will be taxed again. Corporations would still be able to write-off on their local property taxes and state income taxes, while this deduction for private individuals would either be greatly limited or eliminated altogether.

While some analysts feel that corporations need this tax cut in order to remain competitive, according to the Economic Policy Institute, by using loopholes in the present tax code, businesses can find various methods to avoid paying their full share. For example, while the current statutory corporate tax rate is 35 percent, by taking advantage of write-offs and various business deductions, corporations actually pay an effective tax rate between 12.5 and 21.2 percent. If the Trump tax plan allows retaining certain tax loopholes, American corporations could possibly see their effective tax rates decrease even further. The bottom line is that American corporations could see benefits in the new tax plan without pain nor sacrifice.

A significant group that will pay for the tax cut will be residential homeowners. A key provision of the plan will impose a ceiling of $10,000 on property-tax deductions for homeowners. This will especially hurt homeowners in states such as New York, Massachusetts, Illinois, Connecticut, California, and particularly New Jersey which has the nation’s highest property taxes. This move will likely cause homeowners to either sell their homes and become renters or move to states that have much lower property taxes. To make matters worse for these homeowners in these particular states will be that under the tax plan the mortgage-interest deduction will no longer be applicable to interest on mortgages surpassing $500,000, or on home-equity loans, or for second homes, such as vacation homes. This could also affect home values in states such as Florida in which many residences are vacation homes.

Another key aspect of the tax plan that would not only hit homeowners but also the Middle Class would be the elimination of state and local taxes deduction (SALT). The SALT enables taxpayers to subtract any tax payments from their income before figuring out how much they must pay to the Internal Revenue Service. The elimination of the SALT deduction could hit taxpayers particularly hard. For example, in 2015 data from the federal government showed that more than 6 million individuals in California claimed the SALT deduction for $112.5 billion. While that leads all states, California, New York, New Jersey, Illinois, Texas, and Pennsylvania together claimed greater than 50 percent of all SALT deductions in dollars in 2014, according to the Tax Foundation. According to a recent study prepared by the office of New York City Controller Scott Stringer a family living there earning $75,000 per year will shell out an additional $1,800 in taxes through the elimination of this deduction. New York Governor Andrew Cuomo recently stated that elimination of SALT will cost New Yorkers an additional $17 billion. 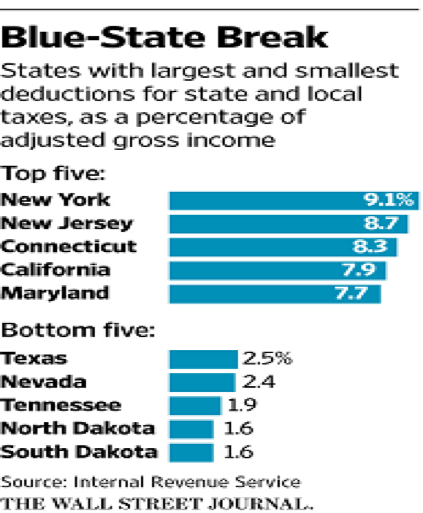 Another deduction that would be cut under the plan would be for medical expenses. The tax plan will eliminate the deduction for medical expenses exceeding 7.5 percent of adjusted gross income which will particularly hurt those with large medical bills. For those households who have children with cystic fibrosis, spina bifida, or a spouse with Alzheimer’s or cancer, the loss of this deduction could be devastating. According to the Urban-Brookings Tax Policy Center, approximately 9 million households, or 6 percent of tax payers, claim the medical expense deduction. While the annual cost is approximately $10 billion, this is regarded as a modest tax break for the U.S. Treasury in which the recipients are generally middle-income and upper-middle-income individuals. Elimination of the medical expense deduction means hurting funds for nursing home care, dental procedures, and bills from out-of-network doctors. 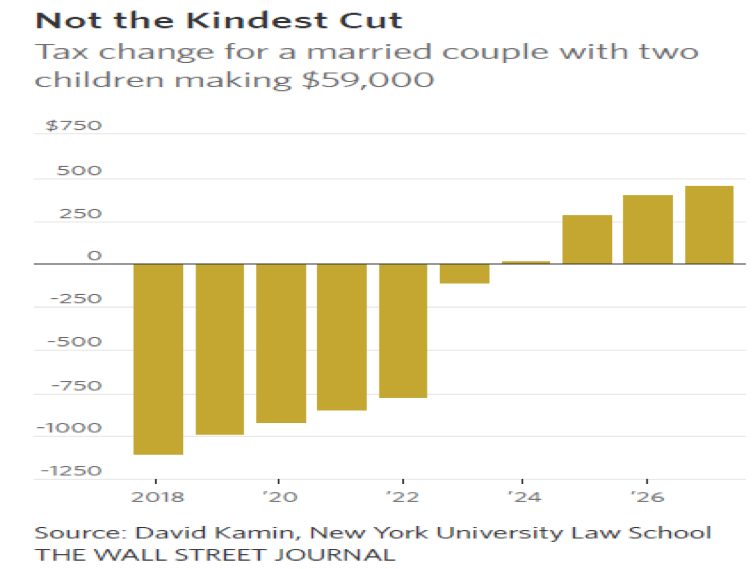 The Senate has proposed their own tax plan and there are points that directly conflict with the version from the Trump Administration and the House. Reconciliation of the three versions could take some time and be vastly different than what each group originally proposed. But the real concern should be who will benefit from the final plan and who will pay heavily. It is more than likely that some groups will see significant financial gains, while others will see long-term catastrophe in higher tax bills, lost deductions, and severe economic pain that could further the growing divide between rich, poor, and middle class.

Why are police in the USA so terrified?