The precipitous drop by the Dow Jones Industrial Average of 1800 points in two days has sent investors into a serious swoon. But the reasons for the market’s drop could really be seen as a perfect storm scenario that was bound to happen.

Investors are suffering from a serious anxiety attack as they watch their retirement savings, child’s education fund, and net worth take a serious nosedive in a relatively short time period. On February 2nd the Dow fell 665 points and rather than rebounding on Monday due to a weekend break, fell another 1,175 points on February 5th. But the severe drop of the Dow has numerous reasons and they all came together starting at 8:30 AM on February 2nd when the Bureau of Labor Statistics announced the monthly jobs report for January 2018. Since then the inevitable has occurred and the big question on every investors mind is: When will it end?

There are various reasons for the Dow’s big drop.

The comeback of inflation: Inflation has not been an American nor a global economic problem for a number of years. In fact, many economists were hoping for some economic growth so that the return of inflation could mean a growing U.S. and global economy. But the concern is that inflation may now be a big problem. For example, the International Monetary Fund (IMF) is predicting that global economic expansion will be 3.9 percent in 2018 and going into 2019. The key here is that consumers are spending again and that too many dollars are chasing too few goods and services. Consumers are releasing pent up demand, but this will cause prices to rise higher than expected. This will probably mean that the Federal Reserve Bank will raise interest rates, thereby hiking bond rates and that money will leave the stock market for the bond market.

The new Federal Reserve chair: Monday, February 5th was the first day on the job of the new Federal Reserve chair, Jerome Powell. The problem is that he is untested and the markets do not know how he will react in case of an emergency or what his overall policies really are. Testimony before a Senate confirmation committee is one thing, but action in a real situation is something else. The markets will need time to get comfortable with Chairman Powell and how he will face this challenge. For example, will he contact James Dimon at JP Morgan Chase and Lloyd Blankfein at Goldman Sachs to reassure them that the Fed is there to handle this situation? There is also the Fed’s policy of getting rid of many of the bonds it holds and its divesture strategy for the coming months.

A weak dollar: Currently, the U.S. dollar has lost approximately 2 percent of its value for 2018 and 10 percent for 2017. Once regarded as the stalwart of currencies, the American dollar is seeing a deep loss in value that has many analysts worried. The big question is how low will it go? And, if it continues to go lower, how will this raise inflation in the United States? President Trump and Treasury Secretary Mnuchin have been talking of the virtues of a weak dollar in order to boost the sale of American products and services in foreign markets. The side effect of this strategy is that it will cause imported goods to be more expensive thus raising inflation. Also, American goods sold in the United States will start to see price increases. If currency traders lose confidence in the American dollar, they will buy euros or yens in order to get a better return on their investment. A stronger dollar can actually have some benefits such as a stable stock market.

An overvalued market: There are investors, academics, analysts, and finance experts who feel that this stock is overvalued and that it was due for a breather. The feeling has been that this market was going up too high, too fast. For example, the Dow went from 25,000 to 26,000 in eight trading sessions. A thousand-point jump has never occurred in such a short time period. So the drop in the past few days could be perceived as either the start of a much-needed correction or the beginning of a stock market crash. Either way, it could be seen that the Dow’s drop was not a matter of if, but when. 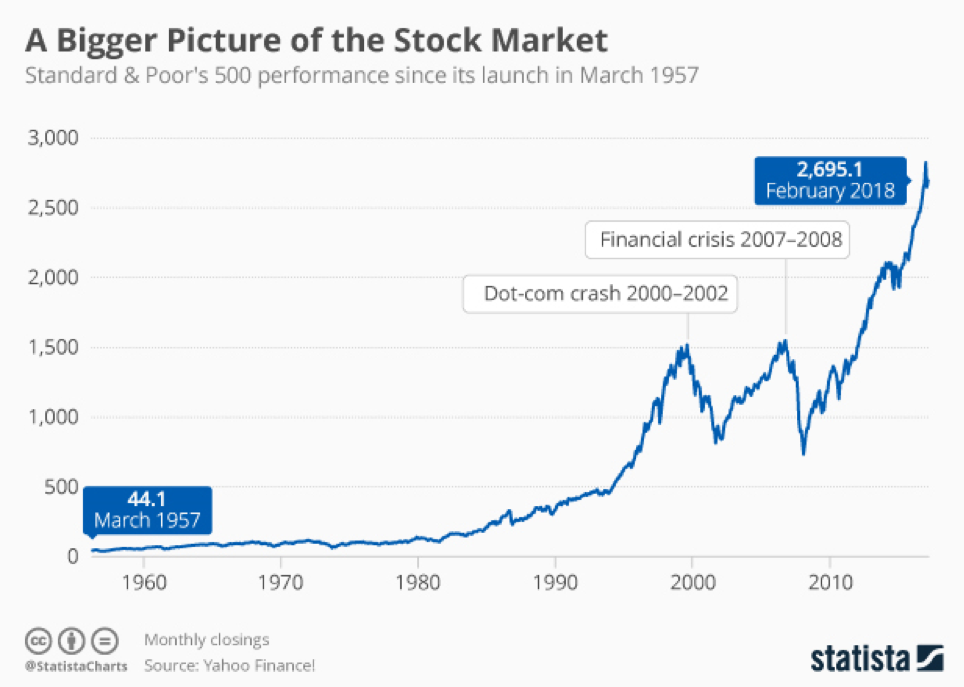 Scared investors and profit takers: When there are investors who are new to the stock market or are deeply inexperienced, they can get scared very fast and pull out at the first sign of trouble. For those investors who have seen terrible lows in the stock market (think back to October 1987 and the Financial Crisis of 2008-2009) it is a matter of staying the course and remembering that markets swing back and forth, up and down. Those taking their profits will eventually get back in since they will look for bargains and use their gains from the Dow’s fall. But in the meantime, the Dow will see lows and keep investors worried until there is some stabilization in the market. 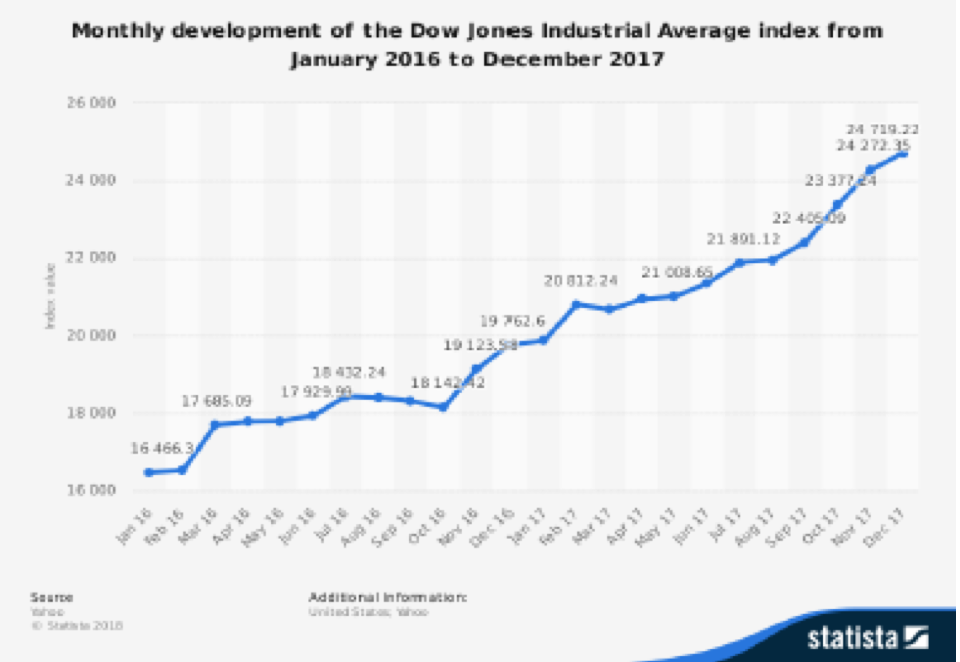 Was the tax cut really necessary?: When the Congress passed the tax cut and Trump signed it into law, euphoria filled the canyon of Wall Street. But now that some time has passed, Wall Street is wondering whether that tax cut was really necessary. The overall U.S. economy is doing well with more people employed, inflation relatively low, and consumers spending. So why have a tax cut? If the tax cut performs as hoped there could be more money going into circulation and that could raise inflation. Adding to that problem, is that with companies such as Apple, Microsoft, and Amazon.com bringing cash back to the United States, paying the one-time fee, and then distributing the money to shareholders in the form of dividends and stock buybacks, Wall Street will reward these firms with higher stock prices. This will only add to overvalued stock prices and bring more volatility to the markets. Also, this tax cut may not have the expected financial benefit to the middle class, but reward the wealthy for having large stock portfolios.

Wages starting to go up, but not necessarily a good thing: The good news about the January jobs report is that wages are starting to go up. For the American worker, this could be a long deserved and long-awaited wage hike that will be a reward for their patience and diligence. The Bureau of Labor Statistics reported on Thursday, February 1st that for the fourth quarter of 2017 unit labor costs increased 2 percent. There was also an increase of 1.8 percent in hourly compensation for the same quarter while unit labor costs went up 1.3 percent for all of 2017. In sum, compensation costs increased 2.6 percent in 2017.  But the bad news is that more money could be put into circulation and that inflation will rise. Combine that with employers having to raise prices on consumer goods and services in order to pay for these wage increases, then inflation will become a key policy concern by the end of 2018. This could lead the Federal Reserve to raising interest rates which will increase mortgage and credit card rates.

These are only a few of the factors that affected the Dow’s drop. There is also the concern that the nation’s gross domestic product (GDP) is growing too fast. There is also the concern that with the tax cut, there will be an increase in the federal budget deficit to $1 trillion for 2018. Compounding matters, the national debt could also rise. While the market has seen a rebound on Tuesday, February 6th, a cloud of uncertainty and volatility could still leave investors anxious and stay on the sidelines until the dust settles.

Why I am optimistic about the future

The fear driving US nuclear strategy