Donald Trump stated in a recent series of tweets before he left for the G7 meeting in France that, “We don’t need China and, frankly, would be far better off without them.” He even went so far as to order American companies to seek different places in the world to manufacture their products other than in China. He suggested that American companies bring their manufacturing operations back home to the United States. China has retaliated by announcing on August 23, the imposition of tariffs of 5 and 10 percent on all American goods coming into their market that do not already have a tariff. Trump’s tweets caused the Dow Jones to end that Friday’s trading session down over 600 points as investors were left to contemplate what was next in the U.S.-China trade war.

What Trump fails to realize is that, for better or worse, the United States needs China for trade and that any move by American companies to leave the Middle Kingdom will take many years     to accomplish. Not only is China a major source of cheap goods for the American consumer, but that farmers in Iowa, Kansas, and other parts of the Midwest desperately need the Chinese market in order to sell their agricultural products. Hopefully, but not likely, Trump will come to his senses and realize that such tweets do more harm than good to the American economy and that for now it needs China very much.

The American economy is consumer-based in which spending makes it go. Corporations, whether based in the United States or overseas, know that American consumers must spend generously or else these firms will suffer serious consequences. But the Trump Administration will be imposing a 15 percent tariff on imported goods as of September 1stand that is cause for alarm for many corporations either selling directly or indirectly to American consumers. This tariff will be a tax on approximately $550 billion of goods imported from China. The bad news for American consumers is that approximately 60 percent of $300 billion worth of Chinese made products consist of finished consumer goods. These products are items such as suits, pants, shirts, televisions, diapers, and textbooks. The increase in prices will be felt by American consumers, if not in the first weeks of the imposition of the tariffs then by the holiday shopping season in December. When American consumers eventually see higher prices on goods imported from China, they will either cut back on their spending or not buy anything at all. The problem really is that there are few American based companies that can offer substitute goods for American consumers to purchase. For example, Walmart receives about 26 percent of its products from China while Target buys 34 percent. Smaller retail stores such as Carlton’s Men’s and Women’s Clothing located in Delaware gets 80 percent of its products from Chinese manufacturers. Because of the tariffs on Chinese made goods coming into the United States, Carlton’s has started modestly increasing their suggested retail prices late in 2018 for the spring line of clothing. Their apparel prices now include the imposition of tariffs on Chinese made goods and as a result Carlton’s has seen a reduction in sales.

If American consumers start to tighten their belts and cut back on spending or make a drastic stop altogether, then the U.S. economy will suffer serious repercussions. This will mean a decrease or slowdown in economic growth or a significant step toward a recession. But either way, the American economy needs its consumers to continuously spend for it to grow. 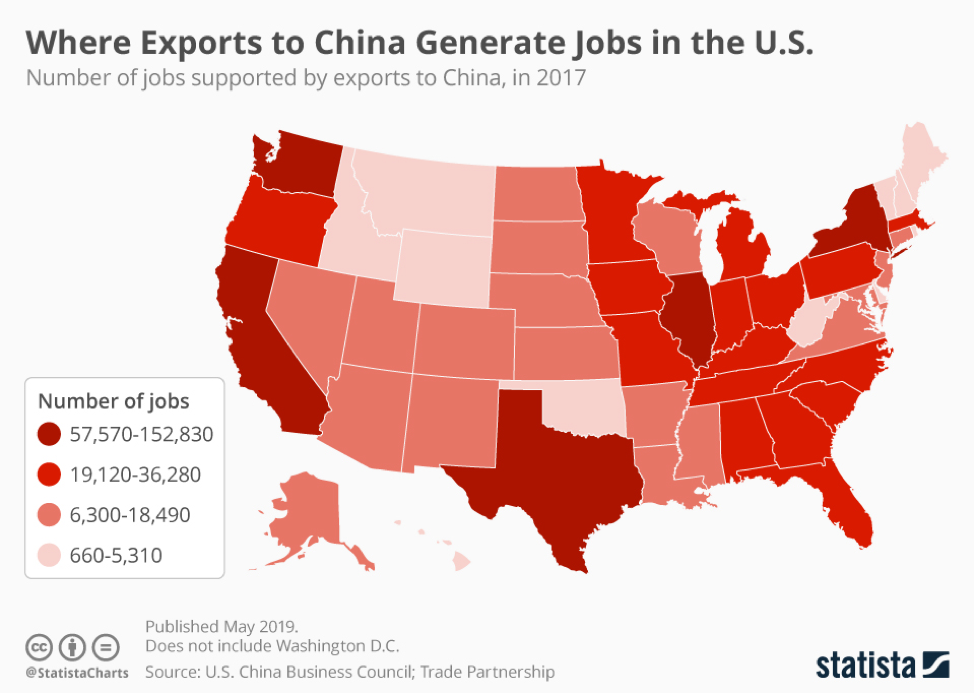 American farmers have grown to rely on sales of their crops to the expanding Chinese market. But with the trade war started by the Trump Administration, sales have decreased precipitously. Sales have gone down so bad that Chinese buyers have gone to other markets, such as Brazil and Canada, to purchase agricultural products such as soybeans at the same or comparable prices. China has now established new supply chain lines that have replaced the long-established relationships that were held with American farmers. These relationships took many years to build, but in a matter of months, they are now gone with American farmers suffering the consequences. American farmers need to sell their products overseas and with China having over 1 billion potential customers, the loss of this market will have more dangerous consequences as time goes by. The American farmer needs China and without this largest foreign market, farm bankruptcy’s and loan delinquencies will only increase. 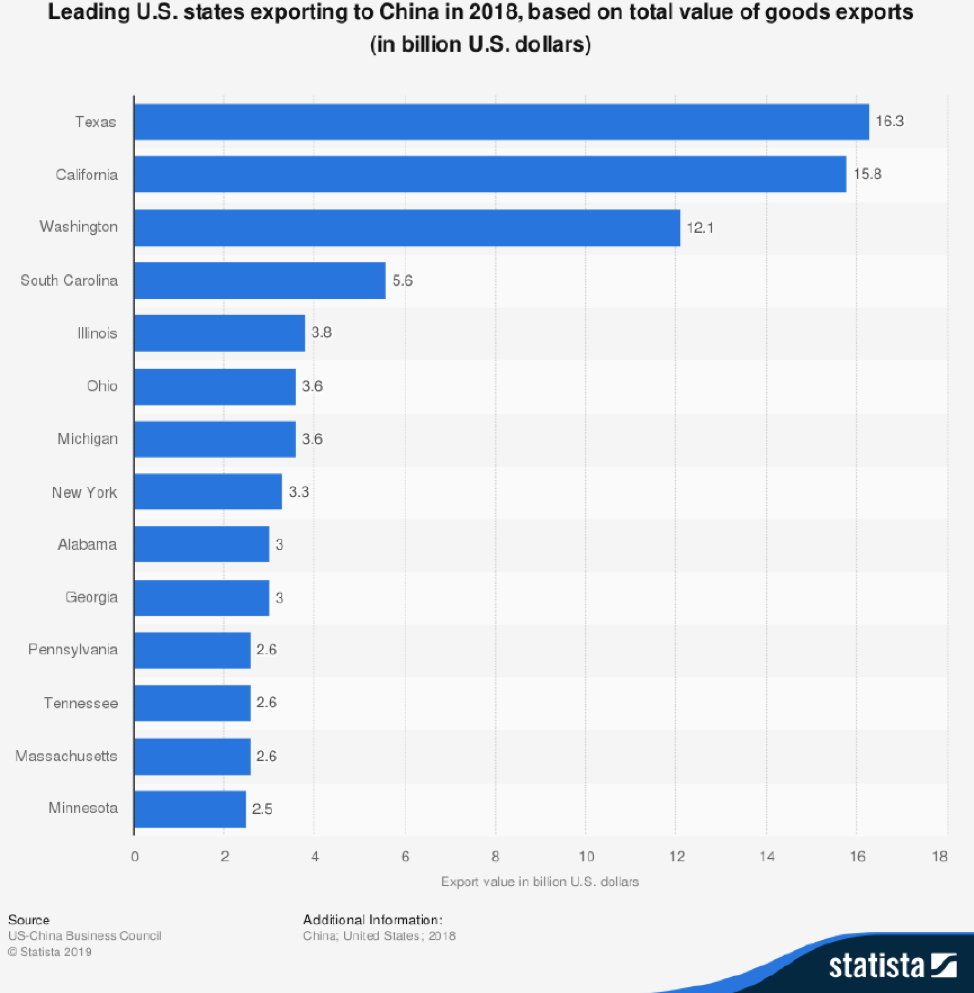 American corporations from Starbucks to Microsoft have spent years cultivating China as a market in order to sell their products and services. While it has not always been a smooth ride for American companies in penetrating the Chinese market, they have made serious inroads and are starting to see sizable returns on their investments. But with the imposition of new tariffs by Beijing, these gains by American corporations in the Chinese market could soon vanish or seriously diminish in time. For example, companies such as Tesla Incorporated and Ford Motor Company are deeply concerned about China’s retaliatory tariffs being imposed on approximately $75 billion of American goods on September 1 and December 15, 2019. Not only will automobiles suffer the brunt of China’s tariffs but also chemicals, apparel, and textiles.

Companies such as General Motors and Ford need the Chinese market since it is the second-largest export market for American manufactured vehicles. In 2018 alone, American car companies exported $6.2 billionin vehicles to China according to the United States International Trade Administration. American automakers see China as a growing and vital market since they exported over 230,000 American-built vehicles to the Chinese market in 2018 as reported by LMC Automotive.

The American auto industry is not the only area feeling severe pain in loss of business with China. According to Janus Henderson Industries China imported 230,000 barrels daily of American crude oil or 11 percent of crude exports from the United States. However, so far up to May of 2019 China’s imports of crude oil have gone down and are at 110,000 barrels per day, or 4 percent of United States crude exports. Another industry experiencing dangerous decrease in sales is high-tech.

Cisco Systems recently reported that its China sales “dropped precipitously in light of trade discussions.” Cisco CEO Chuck Robbins has also stated that the company is “being uninvited to bid. We’re not being allowed to even participate [in large China enterprise deals] anymore.” In the last quarter ending in July 2019 Cisco saw its sales fall more than 25 percent. The pain is also being felt by other high-tech firms such as storage and data-management company NetApp which expects a decrease in business in the Chinese market.

When will it end?

Without any question, American consumers, farmers, and companies, to name a few, need China in a variety of ways. The imposition of tariffs on Chinese made goods will have serious consequences that will harm the American economy and eventually join in the global economic slowdown. The key question is when will the United States and China sit down at the negotiating table in order to reach a settlement favorable to both sides? Or will this trade war last indefinitely to the point when the United States see its economy shrink resulting in a serious recession?

Should parents help their kids with homework?