The macroeconomy of the United States has seen a relatively good year with more new jobs, lower unemployment, manageable inflation, and overall economic growth. While the economy is not perfect, there are several key reasons that can explain the nation’s good economic position.

The Federal Reserve Bank (the Fed) cut interest rates three times in 2019 believing that this would be enough to have continued moderate economic growth, along with more job creation and helping inflation keep within the 2 percent target level. While many economists believe that the Fed will not raise rates for a while, they are in the range of 1.5 to 1.75 percent that the Fed is comfortable with. The Fed hopes that this will stimulate the demand for consumer and business loans so that spending may continue.

The Fed is concerned with slower economic growth on a global scale and that trade will suffer a decrease due to lesser worldwide demand and ongoing trade disputes. The rate cuts in 2019 actually reversed almost all of the rate increases seen in 2018 and placed the Fed in a defensive position so that the American economy can keep its record economic expansion moving along. The lower rates have kept the Dow Jones Industrial Average, along with the S&P 500 Index, at record highs and made investors very happy. Jerome Powell, chair of the Fed stated in October that, “Overall, we see the economy as having been resilient to the winds that have been blowing this year.”

Earlier rate cuts occurred in July and September of 2019 and October’s reduction was more of hedge by the Fed to ensure that business loans would be cheaper and manageable. The Fed reduced its policy rate to a total of 0.75 percent in 2019 and it does not seem to be worried about inflation going over 2 percent, thereby seeing no reason to raise rates in 2020. The real concern is whether the reduction in interest rates will help the American economy continue its period of expanded growth well into 2020 and beyond.

Residual effects from the Obama Administration

The policies put into place by the Obama Administration not only helped the American economy recover from a devastating financial disaster, but also left residual effects that the Trump Administration benefited from.

First, under the Obama Administration job growth started its long climb upwards from early 2010 to the most recent jobs report of December 2019. This can be seen from January 2009 when President Obama took office and there were 77 percent of the nation’s population between 25 and 64 who held a job. While the rate fell to 74.8 percent in December 2009 it eventually climbed to 78.2 percent in January 2017 when President Obama ended his term in office. President Obama is considered the third-best president in job creation in American history as 16 million Americans gained employment from the low point of the Great Recession in December 2009 to the end of his second term in office.

Tied with job creation, there has been an increase in wages in which the average weekly salary not only has gone up since early 2013 but reached a record level at the end of 2016. Total household incomes have also seen upward movement since 2014. The bottom line is that with a recovering economy since President Obama took office, the economic foundation of the nation, which is households, has seen a movement upwards in terms of wages and incomes.

There was also the passage of the Affordable Care Act (ACA) in 2009 which saw the expansion of health care coverage for more than 20 million Americans as they could finally have health insurance. This act allowed the United States to join other advanced industrialized nations to provide health insurance coverage for more individuals. There was the passage of the Dodd-Frank Wall Street Reform and Consumer Protection Act of 2010, providing for stabilizing policies for the financial services industry. This act helped reduced the chances of extreme high and lows in the financial sector while implementing regulations such as the “Volcker Rule” which prohibited banks from incurring high losses with depositors’ funds. 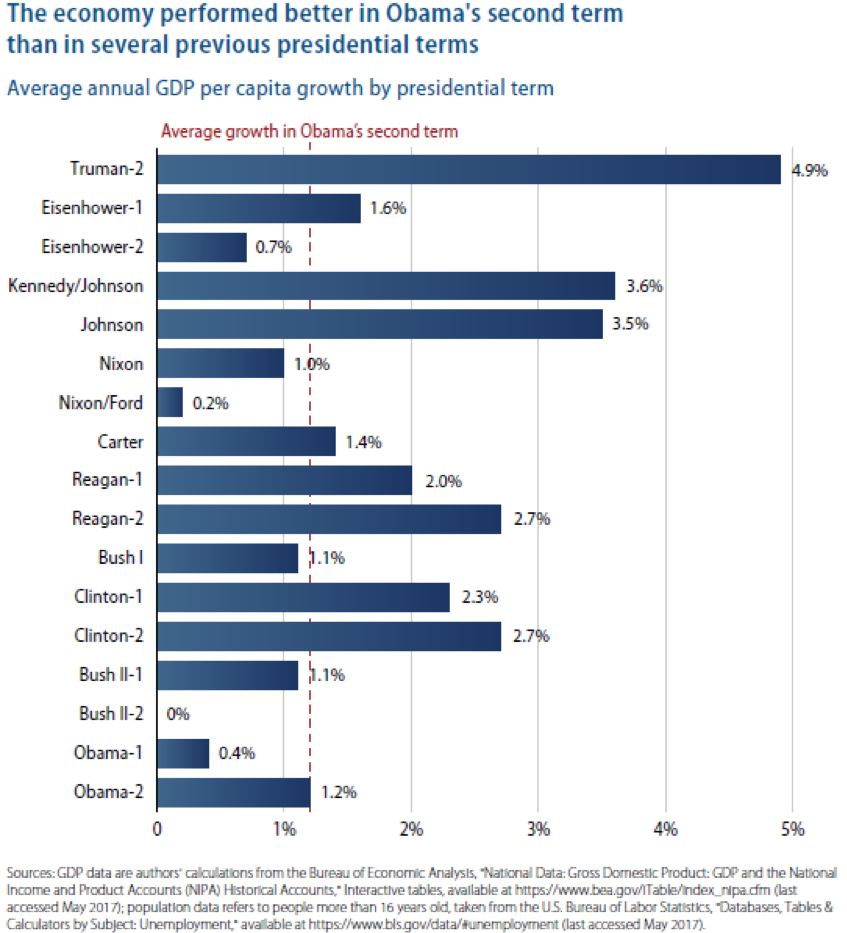 If there was one major piece of legislation that helped 2019 see economic growth, it was the Tax Cut and Jobs Act of 2017 (TCJA). The Act provided a $1.4 trillion tax cut benefiting corporations and their executives, as well as major investors, and the wealthy. Corporations, large and small, saw a flat tax rate of 21 percent that not only lowered their tax bite, but made planning easier than ever before. Major corporations such as Anheuser-Busch, United Technologies, Coca-Cola, News Corporation, and American International Group (AIG), to name a few, saw substantial increases in their profit margins allowing them to increase their cash positions, dividends to shareholders, and have more stock buybacks than ever before.

The TCJA also benefited the wealthiest of Americans. For example, the Act saw the estate tax being reduced and the “generation-skipping tax” was repealed. This allowed the wealthy to save over $240 billion in estate taxation in the next decade.

The TCJA also repealed the Alternative Minimum Tax (AMT) and added $450 billion over the next decade to the pockets of America’s wealthiest. The TCJA and subsequent tax loopholes under the Act allowed for billions of dollars to go to corporations to enrich their executives, make shareholders wealthier, and increase their cash holdings.

Deficit spending will mean that the Fed will probably need to raise interest rates in the next few years to deal with the increase in money in the American economy. The Fed will be concerned with inflation and the rise in interest rates will impact consumer and business loans in the long run.

Growth: But at what cost?

The economy of the United States has seen substantial growth within the past year. But the crucial question is: At what cost? To pay for the tax cuts the Trump Administration so desperately wanted, it was willing to sacrifice the federal budget for the next ten years with deficits at over $1.2 trillion annually. Rather than making a long-term plan that could help the American economy create more jobs at a living wage, the Trump Administration has been extremely concerned with tax cuts, short-term economic growth, and a booming stock market. Wall Street is very happy with the results. But how will this ultimately affect Main Street?

Russia's diplomacy of education, Contribution to human resource development and the third world: 60 Years of RUDN