American manufacturing has significant strengths that make it a global leader. These strengths are the envy of other national economies and are regarded as being twenty to thirty years ahead of everyone else.

Increased use of high technology: American manufacturing is leading the globe in productivity and made it an enticing place for significant investments by foreign and domestic corporations. Even though American manufacturing labor costs are regarded as being higher than desired, many foreign investors see the United States as the best place for such aspects as the use of industrial robotics, and disruptive technologies. These disruptive technologies include additive manufacturing, 3D printing, advanced robotics, along with the increased use of the Internet of Things (IOT), Big Data, and Artificial Intelligence (AI).

The use of these new technologies has increased productivity and has been attracting foreign companies to move their operations to the United States. Even with the increased use of new advanced efficient and effective technologies, American companies that once moved their manufacturing operations to Asia are now returning them to the United States or known as “Reshoring”. The advantage for these companies is making diverse products cheaper, smarter, and faster based on technological innovations not really found anywhere else.  This new chapter in the use of technology has helped American corporations use data in innovative ways. For example, the John Deere Corporation now uses sensors in some of its products and this allows the company to sell the data it gathers from these sensors to their customers, mainly farmers so that they can improve their agricultural practices.

The use of new technologies in American manufacturing has seen production grow to new heights. For example, according to the Bureau of Economic Analysis (BEA), in 2016 American manufacturers produced $5.4 trillion in goods and tangible products including chemical products ($752 billion) and motor vehicles and parts ($670 billion). In the first quarter of 2017, after an adjustment for inflation, manufacturing production increased by more than 80 percent above levels set in 1987. The increased use of technology in American manufacturing allows for increasing productivity by American workers. This is seen where in the 1980’s 25 workers were needed to generate $1 million in industrial production, but now only 6.5 can do the job. 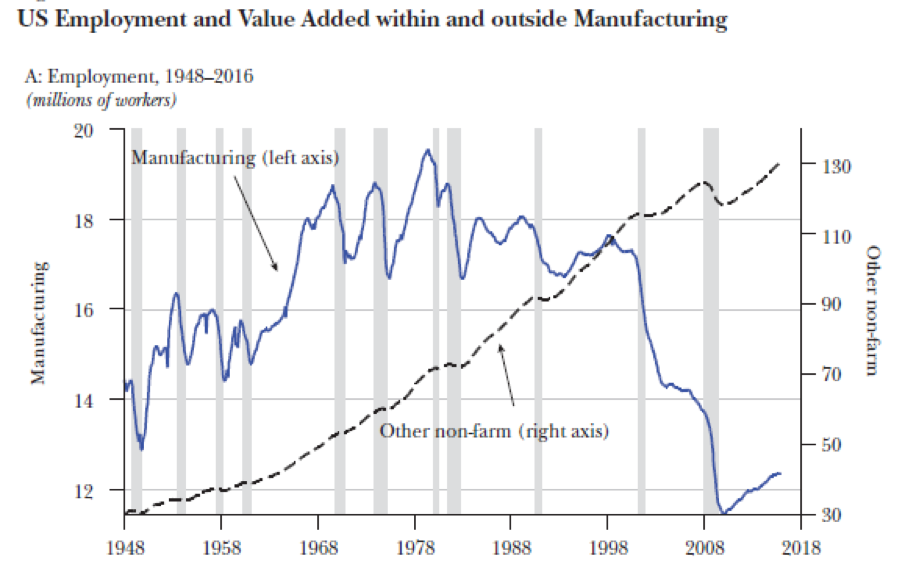 Decreasing costs: Because American manufacturing has been increasingly using high technology in its processes, it can reduce its costs so it can be competitive with nations that used lower costs as an advantage. The increased use of robotics, automation, IOT, and AI have permitted American manufacturing companies to make its products faster, cheaper and more efficient than ever before allowing not only for decreased costs but also higher operating, gross, and net profit margins. Such items as cost of goods sold, product reworks, and manufacturing error have seen significant decreases and allow American manufacturers to increase their profitability levels.

Combine this with the cost of imports from China and Asia going up, reduced manufacturing costs have made American producers more attractive to not only companies in the United States but in other markets overseas. At one time Chinese manufactured goods were far cheaper than American made products. But now with the use of AI, robotics, and automation, Chinese manufactured products are only 5 percent cheaper to make in China versus American made goods. This means that companies such as Motorola are using American based manufacturers to make products for both the U.S. market and overseas markets. But this all goes back to the increased use of high technology in the American manufacturing process.

Highly skilled workforce: American manufacturing can thank its highly skilled workforce for its improving position in the global marketplace. This includes thousands of experienced and knowledgeable men and women who have spent many years in the manufacturing industry working on a variety of products and goods using their hands and intelligence. The United States has an estimated 12 million manufacturing workers which makes up approximately 9 percent of the nation’s workforce. These skilled and experienced workers contribute to American Gross Domestic Product (GDP) to the tune of $2.1 trillion of the manufacturing sector alone. These workers are needed not only for their skills, experience, and knowledge but also for their flexibility and commitment to quality. 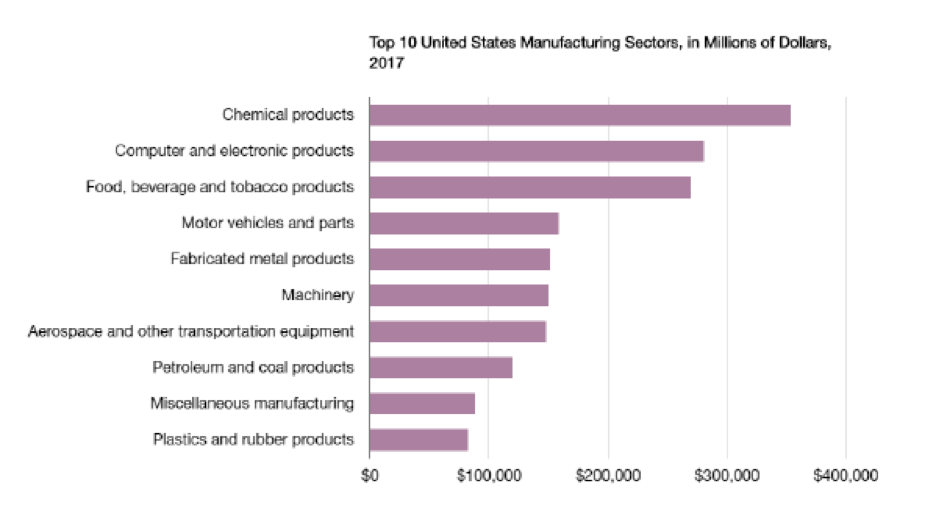 American manufacturing has certain problems it must deal with that will have long-term ramifications affecting its position in the global marketplace.

Shift toward service-based economy: The American economy has been shifting toward being a service-based economy since the 1960’s and this has ultimately hurt the manufacturing sector. This means that investors have been putting their financial capital towards banks, insurance companies, retail establishments, and internet ventures rather than to manufacturing firms. This has made it more difficult to attract investment dollars that could help them grow and become competitive with other manufacturing companies around the world. Wall Street does not consider manufacturing as exciting an investment possibility as hi-tech firms, internet companies, or biotech even though manufacturing should be regarded as important as those industries. Compounding the problem for manufacturing has been the growth of the healthcare industry and government subsidization of hospitals, nursing homes, and elder care through Medicare and Medicaid. Banking and financial services have attracted more investor capital due to deregulation and a growing stock market. American manufacturing has a steep hill to climb if it wants to reach the same financial levels as biotech, hi-tech, financial services, and healthcare in the long run.

Lack of highly skilled workforce: In order for American manufacturing to really rebound, it needs more highly skilled workers. According to the Bureau of Labor Statistics (BLS), manufacturing jobs reached their highest point in 1979 with 19.4 million people in the manufacturing workforce. Unfortunately, by 1987 the manufacturing workforce declined to 17.6 million workers and further fell to 11.5 million in early 2010. Due to this decline, manufacturing firms are willing to retain workers longer and paying relocation costs and bonuses to transfer newly hired skilled workers across the United States at a high price. Currently, there are more than 500,000 American factory jobs that need to be filled and that manufacturers will pay higher wages, offer signing bonuses, and cover 100 percent of relocation costs in order to attract and retain new workers.

Another problem is that the educational system is not turning out students who have sufficient technical skills in order to work in the manufacturing industry. American high schools are not geared toward producing students that are trained for science, technology, engineering, or math (STEM) based jobs. This is a huge problem for American manufacturers who desperately need workers who have STEM background since manufacturing is becoming more geared toward the use of high technology. This is known as a “skills gap” in which 2.9 million Baby Boomers will be retiring over the next ten years and they must be replaced by a new generation of workers with the knowledge and training to take over for those leaving.  Also, few academic programs in the United States have apprentice programs that adequately prepare students for well-paying manufacturing jobs. Other nations such as Germany and Switzerland, have a large supply of highly skilled workers who are ready, willing, and able to step into manufacturing jobs that use high technology.

American manufacturers, in some cases, are willing to work with local high schools, technical schools, and community colleges to start programs that will train students in STEM courses so they can slide into new manufacturing jobs in a seamless fashion. This strategy will take time to implement and need full cooperation between education, government, and the manufacturing industry if it is to work.

Federal support for Research and Development: There must be more financial resources committed by the Federal Government to basic and applied research. The Federal Government has a substantial amount of financial and intellectual resources in order to help the manufacturing industry with its efforts to improve its use of technology and finding new methods to make better, more advanced, and lower cost products. The nation that put men on the moon, discovered a polio vaccine, brought artificial light to a dark world, created the internet, and conquered the sky, can discover new technologies to further enhance American manufacturing and productivity. This will involve a long-term commitment of human, financial, and intellectual resources that the United States most definitely has. But the Federal Government must be able to move resources to helping American manufacturers conquer new worlds, discover new technologies, and lead all nations to a better tomorrow. The Federal Government must become risk averse and assist American manufacturers to take risks which will involve a chance of failure for trying new projects but also contain greater returns for its long-term successes. This shifting of resources also means a change in national priorities and objectives rather than just giving tax breaks to wealthy investors and encouraging companies to pay higher dividends and repurchasing their common stock.

What will the future hold?

It is uncertain what the future holds for American manufacturing, but there must be more commitment by both industry and governmental policymakers in order to see this rebirth continue. For example, there must be more global trade pursued by American manufacturers in order to enter new markets whether in emerging or developed nations. There must an ongoing adoption of high technology in the manufacturing industry in order to create better, cheaper, and more advanced products. This also entails further developing the manufacturing workforce, not only to replace those who are retiring but to enhance the skill set of existing workers in order to function in an everchanging environment. The strategy must be for manufacturers to think and invest for the long run, and be aware of changes that are coming soon.