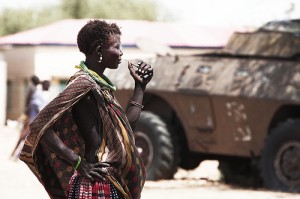 On December 31, members of Lou Nuer tribe stormed Pibor, which is the home of Murle ethnic group. The members of Murle tribe fled in tens of thousands across the border into Ethiopia, as thousands of Lou Nuer fighters chased them. The South Sudanese government called on the parties to stop the violence and sent thousands of troops and police force to Pibor. Over the past few months, the rival tribes in Jonglei, one of ten states of South Sudan, fought fierce battles because of cattle raids, resulting in 1,000 deaths.

United Nations has already started relief operations for the refugees. Eighteen flights have already landed with necessary supplies of food and shelter. All relief supplies are being transported to Malakal, a town in the north of South Sudan, from where it will be distributed to other nearby locations accordingly.

South Sudan proclaimed its independence from Sudan on July 9, 2010 after long years of inter-ethnic war between the predominantly Arab North and Christian South which started in 1983.  The conflict claimed some 2 million lives before the ceasefire deal was enforced in 2005. The independence that came five years later was a result of state referendum held after series of negotiations culminating in Naivasha Agreement with both states agreeing for referendum. Despite the end of war, the tensions remain live with thousands of weaponry and ammunition in hands of many groups.

In 2003, Darfur region of Sudan became home to another major conflict, which resulted in endless massacres of thousands of civilians. The International Criminal Court issued a warrant for the arrest of the President of Sudan, Omar al-Bashir on charges of military crimes and Darfur genocide.

The skirmishes between Sudan and South Sudan continue.

Azerbaijan and Turkey planning to build a Trans-Anatolian gas pipeline