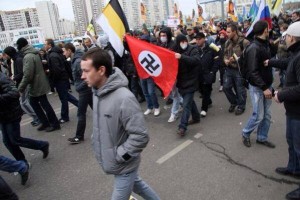 Since that cold night when the Russian national Egor Sherbakov was allegedly stabbed by Orkhan Zeynalov, an immigrant from Azerbaijan, inter-ethnic tensions have been on a sharp rise. Nationalist Russian groups, apparently disgusted by the inflow of immigrant population which has been the base for cheap labor and a reason for low cost products, have now taken to the streets. Although their numbers are not big, the message has been drawing attention. The major push is given by a few outspoken – some may say “insane” -politicians such as Vladimir Zhirinovsky, who recently explicitly proposed radical measures to be taken against the immigrants from Caucasus, and not less importantly, by the Russian leadership, who implicitly support the nationalist movement and has pretty much been silent against the Nazi outbursts in recent weeks that had already claimed lives.

Vladimir Zhirinovsky, the head of the ultra-nationalist Liberal Democratic Party of Russia (LDPR) and State Duma deputy speaker long known for his provocative and inflammatory statements, has sparked controversy once again, this time for comments about North Caucasians. During a television talk show on October 24, Zhirinovsky called for putting barbed wire around the North Caucasus, while forcibly suppressing fertility and increasing the military presence and surveillance in the region. His debating opponent on the show, the well-known journalist Maxim Shevchenko, called Zhirinovsky’s proposals “fascist” and accused the LDPR leader of assisting the North Caucasian separatist cause.

Despite the talk show host’s visible disapproval of Zhirinovsky’s incendiary remarks, viewers voted in support of his position over that of his opponents by a ratio of three-and-a-half to one. Moreover, Zhirinovsky’s opponents on the program themselves raised concerns about the rise of “Islamization” of Russia and agreed with him on related issues. It is also notable that the program was broadcast on Rossiya 1, one of the largest TV networks under Russian government control.

What Vladimir Zhirinovsky says often articulates views that the Kremlin does not want to express openly but implicitly supports. Knowing this, few politicians usually react to his statements. This time, however, given the current heated public discourse in Russia about the relationship between ethnic Russians and North Caucasians, his comments sparked a backlash. The Chechen branch of the LDPR announced it was disbanding in protest of the derogatory statements of the party’s leader. The parliament of Dagestan addressed President Vladimir Putin, asking him to strip Zhirinovsky of his seat in the parliament and launch a criminal investigation against him. The Parliamentary Committee for Nationalities’ Affairs asked the Russian prosecutor general to check Zhirinovsky’s statements for extremism. The Kabardino-Balkarian parliament and Chechen leader Ramzan Kadyrov also severely criticized the State Duma deputy speaker for his proposals.

The relationship between ethnic Russians and North Caucasians has been a hot topic for discussion in Russia for some time. Recent events, including the ethnic-Russian riot in Moscow in October, sparked by the alleged killing of an ethnic Russian by an Azerbaijani citizen, followed by an attack in Volgograd by a Dagestani female suicide bomber, further galvanized the Russian public. Following his televised comments, Zhirinovsky continued his diatribe against the North Caucasians, and suggested he had the Russian government’s full backing. On October 31, he expressed concern that ethnic Russians were living in a “humiliated” state while the country’s ethnic republics have excessive autonomy. He said that in order to strengthen the country, the ethnic republics within Russia should be disbanded and non-Russian languages outlawed.

Even the head of Dagestan, Ramazan Abdulatipov, who was installed in the republic by Moscow, responded in a surprisingly sharp manner to Zhirinovsky’s comments. During a session of the Dagestani parliament, Abdulatipov reassured the deputies that he had spoken to the Russian presidential administration, the Investigative Committee of Russia and Russian Federal Security Service (FSB) chief Alexander Bortnikov about Zhirinovsky. “It does not hurt me so much as a Dagestani,” Abdulatipov said. “We have gone through many trials recently. I feel sorry for the Russian people. If the Russian people have defenders like Zhirinovsky, this tells us something about the deep tragedy of the people”.

On October 31, Abdulatipov called on the Dagestani parliament to raise the issue of the anthem of Krasnodar region, which uses a derogatory term for Muslims and portrays them as enemies of the Russian people. The initiative came after Krasnodar soccer fans burned a Dagestani flag at a soccer game between the regions’ teams. Emotions are reportedly running high in Dagestan after a series of nationalistic outbursts in Russia. So the republican government apparently has to react somehow to the changing public dynamics in Dagestan.

Some Russian analysts see the situation as beneficial to all parties. The Kremlin is diverting Russian nationalist support from true opposition figures like Alexei Navalny to the fully loyal Vladimir Zhirinovsky. The leaders of the ethnic republics in the North Caucasus are showing their constituents that they care about their rights. Zhirinovsky, meanwhile, is boosting his party’s popularity. In the end, the heated rhetoric comes to nothing.

However, the controversy surrounding Zhirinovsky’s latest comments may not end up being as beneficial to the political players as initially assumed—emotions within society are running high, and the politicians might be forced to actually take some decisive steps beyond simply making a show of their indignation. The Kremlin does not seem to have a good way out. If Moscow reprimands Zhirinovsky, thereby supporting the North Caucasians, it will face a backlash from ethnic Russians. If Moscow does not react to Zhirinovsky’s tirade, it will disappoint the North Caucasians and undermine the positions of the governors in the region. Since the Russian government cannot afford to offend ethnic Russians, the North Caucasians are likely to bear the brunt of ethnic-Russian resentment. This is likely to result in ever greater levels of distrust between non-ethnic-Russian North Caucasians and ethnic Russians, while the governments in the republics of the North Caucasus will have to adopt much more nationalistic stances in order to retain some credibility among their constituents.