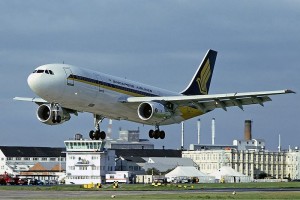 The title of the world’s longest commercial flight will go to Qantas next month when Singapore Airlines ends its nonstop flight between Singapore and Newark next year, a distance of about 15,300 kilometres. It follows the axing of the slightly shorter route between Singapore and Los Angeles on the weekend. The two routes were flown on gas-guzzling Airbus A340-500s.

The airline found the only way to make the routes profitable was by configuring the plane with 98 business class seats that sell for about $8000 roundtrip. Other airlines operate the same plane with about 250 seats in first, business and economy classes.
The flight from Newark, right outside New York, to Singapore takes about 18 hours. The trip from Los Angeles is about 2400 kilometres shorter but takes 18 hours and 30 minutes.

Headwinds over the Pacific Ocean slow the Los Angeles flight while the Newark flight goes over the North Pole and can fly faster.

The Newark flight is the longest distance flight in the world and the Los Angeles one holds the record for duration. The flights started in 2004. The new titles for longest flights will go to a Qantas route between Sydney and Dallas – which at about 13,700 kilometres is the longest route – and a Delta flight between Johannesburg and Atlanta, which at 17 hours will hold the title of longest duration, instead of distance.

Russia's economy would lag global growth over the next two decades