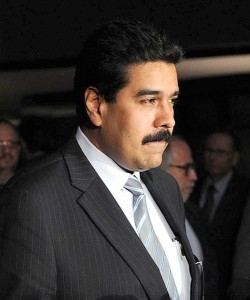 The pro-government majority on Thursday approved the request in the first of two required debates. The second will be held next week. Opposition lawmakers allege that Maduro is trampling on Venezuela’s democracy after congress this week stripped a lawmaker of her immunity from prosecution on corruption charges. With the lawmaker’s removal and substitution with a government supporter, Maduro was able to garner the crucial 99th vote he needed to win passage of the bill. Maduro has said he will use the extra powers to intensify actions against opponents and businesses he accuses of waging an “economic war” to destabilize the South American nation.

Venezuelan President Nicolas Maduro said that authorities had arrested more than 100 “bourgeois” businessmen in a crackdown on alleged price-gouging since the weekend.

“We have more than 100 of the bourgeoisie behind bars at the moment,” Maduro said in a speech to the nation.

The socialist leader, who won a vote to replace the late Hugo Chavez in April, said his government was preparing new regulations to limit businesses’ profits to between 15 percent and 30 percent. Authorities say unscrupulous companies have been hiking prices of electronics and other goods more than 1,000 percent.

Turkey lifts ban on pants for female MPs in the parliament