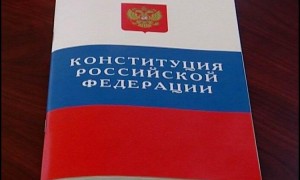 Russia’s supreme law should specify that marriage is “a union between a man and a woman,” one of the authors of the Russian Constitution has said. He then criticized proposals to drop Article 13 that bans any state ideology.

“In 1993, it wouldn’t have occurred to us, to write down in the Constitution that a marriage is a union between a man and a woman,” said Sergey Shakhray, former Deputy Prime Minister and one of the authors of the Russian Constitution.

Now, speaking at the National Civil Rights Congress in Moscow 20 years since the modern Russian Constitution was created, the politician believes it is time to set the record straight.

Shakhray said it was “self-evident” at the time that marriages were heterosexual.

This situation has apparently changed over the last two decades. The issue of same-sex relations in Russia has become a controversial subject, even prompting the adoption of a law that imposed restrictions on propaganda of non-traditional sexual relations among the minors.

Known as the ‘gay propaganda law’, the document has been wildly criticized in the West but has enjoyed popular support in Russia, where traditional relations are dominant.

Russian President Vladimir Putin has stressed that the law has nothing to do with homophobia, and that any sort of intolerance in the community, including negative attitudes towards sexual minorities, should be avoided and prevented by the authorities. The law, however, addresses concerns of traditional, heterosexual Russian families who are very sensitive about the promotion of same-sex relations to their children.

Shakhray has also expressed concerns over proposed amendments to Article 13 of the Russian Constitution, which states that “no ideology may be instituted as a state-sponsored or mandatory ideology.”

He said that it was thanks to this article that the Soviet practice of revoking people’s citizenship no longer exists in Russian Federation.

Media reports at the end of November stated that the Russian MP, Evgeny Fyodorov, had prepared an initiative proposing the removal of the state ideology ban, which would also downplay the recognition of norms in international law as part of the Russian legal system. Fyodorov’s party, United Russia, disowned his proposal, saying it had not been collectively discussed.

Blast near US embassy in Kabul