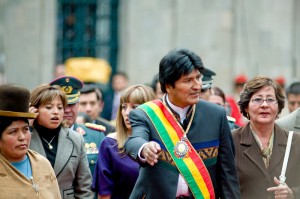 Bolivian President Evo Morales praised his country’s cordial diplomatic ties with China and Russia on Monday, and lamented a “lack of trust” in relations with the United States.

“Our most recent trip to China has been important. We had a more than three-hour meeting with Chinese President Xi Jinping, where we talked about state-to-state cooperation and investment,” Morales told Bolivian ambassadors at the Foreign Ministry headquarters here.

Morales recalled discussing development projects and policies with Chinese leaders as “friends and partners,” saying such relations needed to be based on “mutual trust.”

Morales witnessed the signing of several cooperation deals, including government technology and economic cooperation, when he met Xi on Dec. 19 in Beijing.

He also recalled meeting Russian President Vladimir Putin in July in Moscow, saying they discussed economic and social policies based on “much trust.”

In contrast, Bolivia and the United States had drifted increasingly apart, Morales said.

The U.S. government did not want to resume normal bilateral ties, despite the efforts of the Bolivian government, which drafted and signed a framework agreement calling for mutual respect and non-interference in national affairs, Morales said, adding he would like to normalize the ties.

Ties between La Paz and Washington have soured since the Bolivian government expelled the U.S. ambassador and the U.S. Drug Enforcement Agency (DEA) in 2008. Bolivia also expelled the U.S. Agency for International Development (USAID) last year, accusing it of meddling in internal affairs.

Syria will include Russian as second foreign language taught in schools