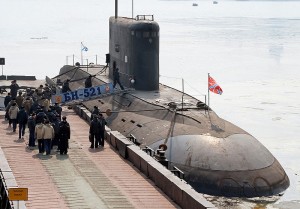 A heavy-lift vessel transporting a Russian-made submarine – the first one out of six purchased by Vietnam – arrived at Cam Ranh last Tuesday.

It took one and a half months to get the valuable merchandise from the Russian port city of Saint Petersburg to Indochina. The 636 Kilo-class submarine named Hanoi is powered by diesel-driven engines. All six submarines will be added to the modernizing Vietnamese navy which is set to expand its naval potential in the wake of rising tensions in the East China Sea and Southeastern Asia, in general.

The submarines are being built at the Admiralteysky Verfi Shipyards in St.Petersburg, an entity which is a part of Russia’s United Shipbuilding Corporation. They can operate at a maximum depth of 300 meters and at a range of 6,000-7, 500 nautical miles for 45 days and nights with a space for 52 crew members.

Cam Ranh where the delivery of the submarine was made retains its strategic importance and may in the upcoming years host Russian maintenance teams within the framework of agreement between Russia and Vietnam. Cam Ranh was considered a strategic asset during the Cold War and Vietnam War. In 1979, after the Vietnam War ended, the base was leased to Soviet Navy for 25 years. After the collapse of Soviet Union, Vietnamese government asked Moscow to pay as much as $300 million annually, an offer Russia refused. The Russian Navy left Cam Ranh in 2002.

The contract for building and delivery of Russian submarines to Vietnam was signed in 2009 during  Vietnamese Prime Minister Nguyen Tan Dung’s official visit to Moscow, Interfax reported. In addition to the delivery of the final product, the Russians are to train Vietnamese crews and deliver necessary technical accessories for the submarine.

The submarines destined for use by Vietnamese navy are third generation vessels which have potential for modifications allowing integration of  newer weaponry in the future, especially the Club antiship missile system that allows expansion of the target engagement zone.

KBR secures contract from BP Exploration for services in Azerbaijan

Islamabad has leverage over Afghan affairs, surely it can reason the Taliban into compromise