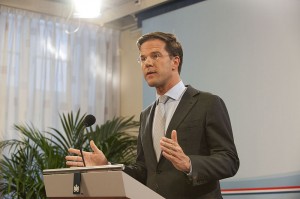 The Dutch Prime Minister Mark Rutte is planning to talk about gay rights in Russia during his formal visit to the upcoming Winter Olympics in Sochi, Xinhua reported quoting his statement on Tuesday during a debate in the Dutch parliament.

“When the opportunity arises I will talk with Russian President Vladimir Putin, but it takes two to tango,” Rutte said. “Otherwise I will at least speak with local Russian organizations.”

Rutte had also mentioned that he will see whether the Dutch delegation could be expanded with representatives of Dutch gay organizations. In addition, the prime minister promised to talk about minority rights in Russia.

Last week the Dutch government announced it would send the most high-ranking possible delegation to Sochi, with Dutch King Willem-Alexander, Queen Maxima, PM Rutte and Minister of Health, Welfare and Sport Edith Schippers.

The decision by the government of the Netherlands makes Amsterdam one of the few in the West among the governments which refused to send their top deputies to Russia. Political leaders of some western countries have recently declined Russia’s invitation to come for the Winter Olympics in Sochi in February.

Following the government’s decision, there was much criticism on the composition of the Dutch delegation. Opponents argued for a less heavy delegation without the PM.

Apart from an outstanding sports spectacle in the Russian resort city of Sochi, the Olympics will also serve a global platform for dissidents in the host country to get the attention of the world on domestic issues such as the gay and minority rights in Russia. This will be a good opportunity for the international media to get the internal issues of the Russian Federation into the spotlight. From the American side NBC will take the exclusive role of having the opportunity. The company is reportedly coming under pressure to do more on behalf of gay rights and journalists there.

Before the bill passed, President Putin publicly said during a visit to Amsterdam in April 2013: “I want everyone to understand that in Russia there are no infringements on sexual minorities’ rights. They’re people, just like everyone else, and they enjoy full rights and freedoms” and that he intended to sign the bill because the Russian people demanded it. “Can you imagine an organization promoting pedophilia in Russia? I think people in many Russian regions would have started to take up arms…. The same is true for sexual minorities: I can hardly imagine same-sex marriages being allowed in Chechnya. Can you imagine it? It would have resulted in human casualties,” the President was quoted saying. The Russian leader also based his arguments on the depopulation problem of Russia where the birth rate is one of the lowest in the world, since same-sex marriages did not contribute to rise in the population.

Paraguay: A nation with abundant minerals and natural gas resources