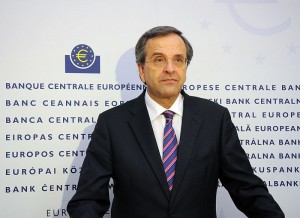 With his coalition government’s support falling, Greek Prime Minister Antonis Samaras has insisted that he will stay the course until scheduled elections in 2016, dismissing speculation about an early vote to coincide with polls in May for local government and the European Parliament.

Speculation about a possible early election has been spurred by weakening public support for Samaras’ Socialist coalition partners in recent opinion polls. The governing coalition was formed after elections in 2012 with three parties, but now consists of Samaras’ New Democracy Conservatives and Foreign Minister Evangelos Venizelos’ Socialists after the departure of a small left-wing party last year.

Samaras has promised to pull Greece out of a six-year recession this year but faces a strong challenge from parties that are against the country’s bailout program as unemployment and social conditions continue to worsen.

His comments came during a speech to his party lawmakers in Parliament. “SYRIZA is saying ‘no’ to everything. It is not harming the government only, but the country as well. There is absolutely no room for cooperation,” Samaras said.

“Thirteen years after it went bankrupt, Argentina still has not recovered,” Samaras told his lawmakers. “SYRIZA wanted us to follow Argentina’s example and now it does not want to be reminded of it,” he added while praising collaboration with PASOK, his party’s one-time socialist nemesis.

“Much stood between us and PASOK for decades, but we were brought together by the shared aim of preventing Greece’s euro exit,” he said.

“The country has suffered, and it is still suffering, but the worst has been avoided and we are now starting to come out of the crisis. Some seem to forget that we stopped the country from collapsing,” Samaras said. “With the help of God and with people’s support we will achieve even more.”

He said, “The aim is to hold elections in 2016. Some people are trying to connect the measures against unemployment with snap elections,” he said.

He also ruled out out forming a governing coalition with leftist SYRIZA and blasted the Leftists. “SYRIZA is saying ‘no’ to everything. It is not harming the government only, but the country as well. There is absolutely no room for cooperation,” Samaras told his conservative MPs.

Samaras also said his debt-ridden country would have a primary surplus — a surplus when not taking into account interest payments on outstanding debt — of nearly 1 billion euros ($1.36 billion) for 2013. Greece, he said, had achieved the sizeable primary surplus a year earlier than expected.

Greece has been dependent since 2010 on $325 billion in two bailouts from the Troika of the European Union-International Monetary Fund-European Central Bank (EU-IMF-ECB) in a failed bid to cut its staggering debt, still at $430 billion, and lower a deficit that was more than three times the 3 percent ceiling set by the EU.

In return for the money, successive governments have imposed waves of harsh austerity measures to reform the economy, setting off countless strikes, protests and riots that have all failed.

Samaras insisted the country had just a short way to go to emerge from its crisis, and stressed Greece had to show stability and determination in the final steps. He said he’s creating a “success story” for Greece.

But his unrelenting support for big pay cuts, tax hikes and slashed pensions has seen support for his party fall anywhere from 1-3.5 percent behind the major opposition Coalition of the Radical Left (SYRIZA).

The Leftist leader,  Alexis Tsipras, has promised to withdraw the country from its deal with the Troika that insisted austerity.  Tsipras said he believes the ruling parties will be repudiated in local and European Parliament elections and that his will come to power.