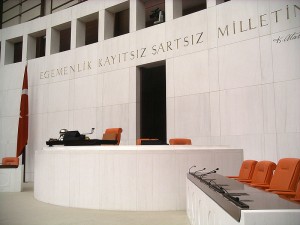 Thousands of Turkish protesters took to the streets anew a little more than six months after the Gezi Park protests subsided, to oppose the newly passed bill on internet censorship. The bill, ratified by the BMM (Turkish Parliament) on February 6, would give broader authority to the government over press and civil society, publishing on Internet.

The protesters gathered in the streets leading to Taksim Square in downtown Istanbul with the slogan “uprising against censorship” on social media. Thousands of riot police took heavy security measures and cordoned off the Taksim square and nearby Gezi Park, where bloody clashes took place last summer.

The demonstration is supported by nearly 50 forums, civil society organizations and opposition parties such as Democracy Party BDP and People’s Democracy Party HDP. The bill is intended to tighten the grip of Prime Minister Erdogan’s ruling Justice and Development Party (AKP) over Internet – a powerful tool to fight the ongoing political war with Gulenists who are in quest for power in the Turkish political establishment.

The bill drew criticism both from international and domestic organizations, stating that the government bans the basic human rights including the freedom of expression.

With the new legislation the authorities are going to be able to block websites without a court orders within four hours. The law would also guarantee that internet service providers (ISPs) store data on their clients’ online activities for up to two years and the police and the ruling authorities upon their request could reach the files.

In the meantime, Turkey’s opposition parties have called on President Abdullah Gül to veto the controversial Internet law.

“The president should take up a position on behalf of democracy and freedom. The impartiality of the president means something different,” main opposition Republican People’s Party (CHP) leader Kemal Kılıçdaroğlu told reporters in Istanbul on Feb. 7, Hurriyet Daily News reported. “To say that ‘regulations against laws come and I sign them despite clearly [problems with them]’ degrades the office of the president. The president pledges loyalty to the Constitution. And he has to do what is necessary. A president cannot defend bans. A president cannot defend legal regulations which were brought by a government saying they will limit freedom,” he said according to the Doğan news agency.

The United States government also raised concerns on the new bill, stating it was not “compatible with freedom of expression.”

“We share the concerns recently expressed by the OSCE’s representative on freedom of the media – and there was a whole statement that I’d point you to – that these proposed measures are not compatible with international standards on freedom of expression,” State Department Spokesperson Jen Psaki said during a press briefing Feb. 6.

Psaki stated that the U.S. administration was actively monitoring the new legislation, confirming that Washington’s position was in line with that of the OSCE.