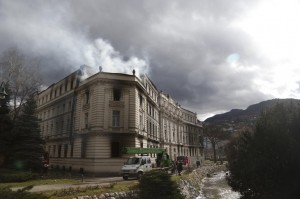 The riots are considered the most violent since the end of the Bosnian War in 1995. Many news outlets such as the BBC and New York Times have already started calling the events Bosnian Spring and Balkan Spring.

The situation deteriorated when the protesters attacked the Presidential building in Sarajevo and set fire to the ground floor. The police was able to push the protesters back and cordoned off the building. The fire was immediately put off. At the same time, another government building and a new municipal building in Mostar was set on fire, as well.

According to The Guardian, in the wake of the protests, most important historical documents covering the 20th century Central Europe might have been lost after the fire was set in the state archives in Sarajevo. The lost documents include the files from the Austro-Hungarian period from 1878 to 1918 – ironically, as Europe readies to commemorate the start of the World War I – as well as Ottoman period and documents from war crimes commission after the World War II.

Several cars, including police vehicles parked in front of the Ministry of Foreign Affairs were also set aflame. Protesters and police continued the standoff in many parts of the country. Although there are no fatalities, there are a number of wounded on both sides already.

As a result of the Bosnian War of 1992-1995, 66 factories were shut down in Tuzla with remaining enterprises being privatized over the last 10 years. Thousands suffered as a result with unemployment rate hitting 48%. The employed individuals have been subject to delays in payment adding to the general public discontent. The retirement insurance premiums had not been paid to the beneficiaries either.

There have been several demonstrations over the last few years but the government reportedly never responded to the demands. The current protests were triggered by closure of the private factories, seemingly one of the only sources of income in Tuzla.

Turks protest after the parliament passes an Internet censorship bill