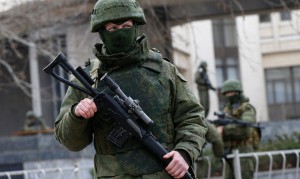 It’s hard to say if the Russian President Vladimir Putin anticipated a rather aggressive reaction from Ukrainian people to Moscow’s buying out of President Yanukovich, but it was predictable all the way that he would not let Ukraine go that easy.

As the Ukrainian crisis deepened, the Russian leader formally asked his parliament to approve sending Russian troops to Crimea, which it readily did. Although Moscow has a formal agreement with Kiev on presence of the Russian Black Sea Fleet on Ukrainian soil and waters until 2042, this approval by Russian parliament unilaterally avoids approval from the government in Kiev.

The so-called approval of the Federation Council of Russia to send troops to Crimea was given post-factum. According to Ukrainian media, 11,000 Russian paratroopers had already arrived in Crimea on February 26 as part of the Black Sea Fleet deployment force. Additionally, on February 23-24 several TU-154 airliners landed at the “Gvardeyskoe” airfield in Simferopol with an undeclared number of military personnel of the Black Sea Fleet. The informal explanation for the arrival of unauthorized troops was that “these are the paratroopers returning from Sochi after an accomplished mission.” Two more “Ural” military trucks had arrived at the military base of the BSF in Yalta.

According to the officials from the Ukrainian mission to the United Nations, Russia now has 15,000 troops on the ground in Crimea. The approval of the Federation Council to send Russian troops to Ukraine does not limit the deployment to a specific area, such as the Crimean peninsula but is widely regarded as a precursor for larger movement of Russian troops into Ukraine proper in the coming weeks or months, depending on how the crisis develops.

Crimea is a convenient trump card for Vladimir Putin’s ambitions. For one, it is home for Russia’s Black Sea Fleet. The Russian Navy there is not particularly powerful: it has the guided-missile cruiser Moskva, a large anti-submarine warfare cruiser – both old, a destroyer and two frigates, landing ships and a diesel attack submarine. However, it still is Russia’s only short access to the Mediterranean and constitutes the only navy forces standing guard against NATO in the Black Sea. Its last mission was striking against the much weaker Georgian forces during the Russo-Georgian war of August 2008, but it can barely withstand against any modern and sophisticated navy in these waters, if it ever attacked.

Secondly, a pretty large Russian minority calls Crimea home. Although Russians took possession of the peninsula during the reign of Catherine the Great, they consider it their legitimate home. The fact that Crimea was transferred from jurisdiction of the RSFSR to Ukraine by Khruschev in 1954 adds up to the Russian nationalistic sentiments. The Russians have long considered the transfer of Crimea illegitimate and humiliating, something that didn’t matter as much in 1950’s under Soviet rule. That is why it was essential for Moscow to reestablish its de-facto control over Crimean affairs since the break-up of the Soviet Union. Following two natural gas disputes in 2005-2006 and again in 2009, Ukraine conceded its positions and signed the Kharkiv Pact, which is a treaty between Kiev and Moscow that extended the lease of the naval facilities in Crimea for the Russian Black Sea Fleet beyond 2017 by 25 years (to 2042) with an additional 5-year renewal option in an exchange for a multi-year discounted contract with price ceiling to provide Ukraine with Russian natural gas. The agreement was signed by then the President Dimitry Medvedev and Viktor Yanukovich and accordingly ratified by the parliaments of these countries on April 27, 2010.

Thirdly, Crimea serves as a leverage against the central government in Kiev. With its semi-autonomous status and pro-Russian parliament, Crimea can provide a legitimate ground for Russia’s intervention, be it through legitimized approvals of Russian-insisted measures, or permission to invade the country. In the early hours of February 27 in Simferopol, 50 heavily armed men in military uniforms, believed to be Russians seized the parliament and other government buildings of Crimean Autonomous Republic of Ukraine. After midnight, a dozen others, also believed to be sanctioned special troops, captured the Simferopol airport; and the anti-riot police Berkut installed checkpoints on the Perekop Isthmus which connects the peninsula with the Ukraine proper. Russian flags were immediately flown on tops of the captured buildings.

With the local parliament seized, the parliament was convened to vote on motion to hold a referendum on expanding the autonomy status (read secession ) in total disregard to the central government in Kiev and the constitution of Ukraine which allows only nation-wide referendums, not localized ones. What’s more, the parliament voted in favor of holding the referendum on May 25, the day when Ukraine is planning to hold presidential elections, which can only be interpreted as a stern message to Kiev and the West, for that matter, that Russia has the upper hand in the internal affairs of Ukraine. Behind the closed doors with armed men on guard, the Crimean parliament also sacked the head of the autonomous region, Anatoly Mogilev, appointing Sergei Aksyonov, the leader of an irredentist faction “Russian Unity”, to head the government – again, in defiance of the Ukrainian constitution, which requires the nomination to the post to be approved by the president of Ukraine.

All of the above are seen as foundations for Russia’s justifications to invade Ukraine and interfere in its domestic affairs. Moscow has used similar tactics in the past, both during the Soviet rule and after its breakup. Among the many examples are Moscow’s invasions in Budapest in 1956 and in Prague in 1968, both with approval of installed puppet governments in those countries; invasions in Tbilisi and Baku in 1989 and 1990, respectively, where scores of civilians were massacred; and arming secessionists in various territories all across former Soviet Union such as ones in Transdniestr, Nagorno-Karabakh, South Ossetia and Abkhazia against legitimate central governments. The developments in Crimea demonstrate similar scenarios.

Putin’s gamble involves substantial risks. First and foremost, he would be breaking international law by explicit violation of international borders of an UN member. Additionally, Russia would be – it virtually is already – violating the Budapest Memorandum, aka Budapest Memorandum on Security Assurances, a diplomatic agreement signed in December 1994 by Ukraine, Russia, the United States, and the United Kingdom, according to which signatories made promises to each other as part of the de-nuclearization process of former Soviet republics, that: a) Ukraine would remove all Soviet-era nuclear weapons from its territory by sending them to disarmament facilities in Russia and sign the Nuclear Nonproliferation Treat, which is did; b) Russia and the West would uphold the sovereignty and territorial integrity of Ukraine, in line with the Helsinki Final Act of 1975.

Secondly, Putin seems confident of his forces due to the decisive victory of Russian forces over Georgian army in August 2008. The United States, as well as the European countries stopped short of unilateral action and united condemnation against Russia’s aggression against the sovereignty of Republic of Georgia. Moreover, Georgia’s population is 5 million and the country is home to many ethnic and religious groups, some of which Russia masterfully used and continues to use against the central government in Tbilisi. Two of these minorities – the Ossetians and Abkhazians – have already been used to break the country apart; the two others – the Armenians and Ajarians living in Javakheti and Ajaria – are utilized from time to time to remind Tbilisi of Russian interests in the region. This scenario may not yield satisfactory results for Putin in the long run. Ukraine has a population of nearly 45 million and is within Europe, at NATO’s doorstep. Moreover, Ukrainian nationalists have proven their commitment to the ideology and would be able to fight for years if not decades against the invader, especially if they are supported by the West. It took the Soviet military machine extended efforts to crush the Banderovtsi movement of determined Ukrainian nationalists after the WWII.

Bitter pages of the history will also play with the sentiments of the Ukrainian people. Ukrainians see the Moscow-orchestrated Holodomor, as a deliberate act of genocide against its people. During the famine in 1932-33, up to 6.5 million people are believed to have died in Ukraine due to policies of the Soviet government – something that will certainly come up as the relations between Ukraine and Russia deteriorate. Putin also risks igniting an interethnic conflict with the Crimean Tatars, ethnic cousins of Turks and Tatars from the Russia’s Republic of Tatarsan, who vigorously oppose any Russian rule and support the Ukranian territorial integrity.

Third, Putin risks condemnation form the international community and trade sanctions against Moscow which would cripple its economy. With the United States in full swing to become an important exporter of natural gas to Europe, Russia will eventually lose the leverage over the continent it had held by deliveries of gas to Europe. Furthermore, with the winter gone, it will be easy to not fall victim to possible gas cuts from Russia.

Putin is determined. Is the West as much determined to help Ukraine?

Italy and Albania: a political and economic alliance, and the Italian invasion of 1939