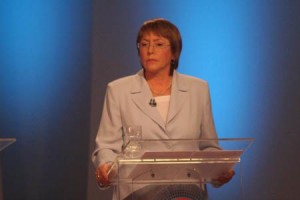 On March 11, Michelle Bachelet was sworn in as the next President of Chile. The outgoing President Sebastian Pinera has applauded the new president and wished her luck in the new journey. Bachelet promised the Chileans to shorten the gap between the wealthy and the poor and institute economic reforms.

The new president heads a coalition that includes moderate leftists as well as communists. Her agenda contains improving the education system and healthcare via tax reforms.

Among the dignitaries present at the inauguration of President Bachelet in Santiago was the Vice-President of the United States Joe Biden. Chile continues to be a strategic ally of the United States in South America. Biden had meetings with Bachelet and sought to discuss the Trans-Pacific Partnership Free Trade Agreement.

The following is the fact sheet on U.S.-Chilean relations released by the White House:

· Free Trade Agreement: The U.S.-Chile Free Trade Agreement continues to benefit both nations. Bilateral trade in goods grew to $28 billion in 2013, which makes Chile our 29th largest goods trading partner overall and our fourth largest export partner in the Americas. U.S. goods exports to Chile totaled $17.6 last year, representing an increase of 548 percent since the Agreement was signed in 2004.

· Trans-Pacific Partnership: The United States and Chile are two of the twelve participants negotiating the Trans-Pacific Partnership (TPP), which will be a comprehensive, high-standard, next-generation trade agreement. Once concluded, the TPP will cover roughly 40 percent of global gross domestic product (GDP). All of the participants stand to benefit from a successful and speedy conclusion of TPP negotiations.

· Multilateral Issues: The United States looks forward to consulting closely with Chile as a non-permanent member of the UN Security Council and member of the UN Human Rights Council. President Obama and President-Elect Bachelet launched our Trilateral Development Cooperation initiative in 2009, and we’ve worked together in countries as diverse as El Salvador, Guatemala and the Dominican Republic on matters as diverse as agriculture, assisting at-risk youth, and security cooperation.

· Visa Waiver Program: On February 28th, Chile was designated the 38th country to participate in the U.S. Visa Waiver Program. Chile’s designation is a testament to our strong relations and its participation will have a tremendous impact in creating even stronger people-to-people ties between our countries. It should also facilitate other potential initiatives to expedite trade and travel. During his visit, the Vice President announced the implementation would be moved up from May 1st to March 31st.

· 100,000 Strong in the Americas: During his March 2011 visit to Chile, President Obama launched the “100,000 Strong in the Americas” initiative to increase educational exchange across the Americas. Chile has already created three partnerships between U.S. and Chilean universities to increase student exchange. There are currently more than 3,000 U.S. students studying in Chile and more than 2,000 Chileans at American universities. In January, the Vice President launched the initiative’s #InvestintheFuture campaign to start an online conversation between students, governments, and business about international education.