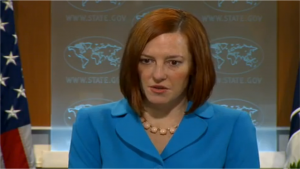 The United States on March 21 slammed an attempt by Turkey to ban the online social network Twitter, which government opponents have used to publish corruption allegations.

State Department spokeswoman Jen Psaki said the order to prevent Turks from accessing the U.S. firm’s micro-blogging site was “contrary to Turkey’s own expressed desire to be a model of democracy.”

“The United States supports freedom of expression in Turkey and opposes any action to encroach on the right to free speech,” she told reporters.

She added that she was not aware of any moves by the U.S. administration to play a role in reported negotiations between Twitter and the Turkish government.

But U.S. officials, including the U.S. ambassador to Turkey, have been working on the issue and “we’ve expressed our concerns through those channels.”

Psaki stressed that “democratic governments must accept the challenge, to … listen to the voices who disagree with us.”

“An independent and unfettered media is an essential element of democratic, open societies and crucial to ensuring official transparency and accountability,” Psaki added.

The White House has released a separate statement. “The United States is deeply concerned that the Turkish government has blocked its citizens’ access to basic communication tools,” the statement by the White House Press Secretary said.

“We oppose this restriction on the Turkish people’s access to information, which undermines their ability to exercise freedoms of expression and association and runs contrary to the principles of open governance that are critical to democratic governance and the universal rights that the United States stands for around the world. We have conveyed our serious concern to the Turkish government, urge Turkish authorities to respect the freedom of the press by permitting the independent and unfettered operation of media of all kinds, and support the people of Turkey in their calls to restore full access to the blocked technologies,” the statement continued.