Acting Ukrainian President, Olexandr Turchynov called an emergency security meeting following the storming of government buildings in three major cities in eastern Ukraine on Sunday. Prime Minister Yatsenyuk claimed their actions were part of Moscow’s bid to destabilize the country as a pretext for sending military forces across the border. Although approximately 40,000 Russian troops remain along the border, NATO officials announced today that they have observed no significant changes in their force disposition.

Separatists in Donetsk seized the regional administration building and announced plans for a referendum calling for the creation of the sovereign “Peoples Republic of Donetsk”. The vote is to be held no later than 11 May, according to Russia’s Interfax. According to Ukrainian press reports, separatists threatened to turn to Moscow for military support if Kiev attempts to interfere with the referendum. Although the Kremlin has not yet commented on the potential use of force, the current force build-up and the annexation of Crimea strongly indicate that President Putin would honor such a request. Masked assailants attempted to storm the Donetsk State Television and Radio Company on Monday, raising the potential for violence, which could further solidify Putin’s foundation for military support.

Also on Sunday in the city of Luhansk, demonstrators took control the Ukraine State Security office, prompting officials to close the regional administration on Monday. The building remains under heavy guard by local security forces. Militants calling themselves the “Joint Staff of the Army of the Southeast” are calling on locals for additional support and have pledged their assistance to separatists in Donetsk, according to Ukrainska Pravda. Russian pressed reported that several protesters and police officers were injured during the skirmish and that activists had cut the road leading to the city. Although the status of the road is unconfirmed, given the city’s proximity to the Russian border, controlled access to Luhansk would lend significant advantage to any western advancing Russian troops. 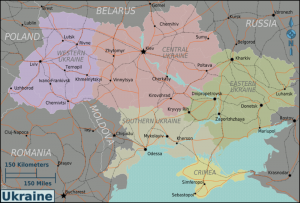 Meanwhile in Kharkiv, although protesters seized the Regional Administration building, members of the regional council and the city’s mayor Gennady Kernes, are holding meetings with opposition forces to determine their next move. Kernes maintains that a referendum is not being considered and that Kharkiv must remain part of Ukraine. Kernes has pledged open discussion with the opposition, and is urging all sides to maintain calm, particularly in light of an upcoming international sporting event, which is expected to draw up to 10,000 visitors.

Although German Chancellor Angela Merkel expressed concern and urged calm after Sunday’s events, Western commentary has been somewhat muted. Vladimir Putin has also remained quiet on the latest developments in Ukraine as he calculates his next move. His decision to use military force will no doubt depend heavily on Kiev’s response. The interim government’s ability to defuse the crisis in the east without bloodshed will be a key factor in preventing further violations of Ukraine’s sovereignty. Alternatively, with his forces as a constant deterrent to Kiev, the separatists may help him achieve his aims without overt involvement.