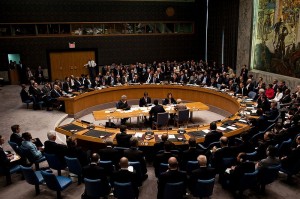 As if watching a horror movie, the United Nations Security Council reviewed photos taken by a former Syrian military police photographer, who reportedly smuggled thousands of photos showing abuse of fundamental human rights out of Syria.

The images show explicit evidence of excessive abuse by the Syrian military and security forces personnel, including strangulation, electrocution, deliberate starvation, inhumane beatings of the imprisoned individuals. This extraordinary exhibition was organized by one of the five permanent members of the Security Council, France.

During the demonstration some 55 thousand photos were presented to the gathering of 15 members states. The horror of the images forced the council members into silence. The United States Ambassador to the UN Samantha Power is quoted saying  that “the gruesome images of corpses indicate that the Assad regime has carried out systematic, widespread and industrial killing.”

She stated that the international community must unite to denounce this sort of abuses. The overwhelming evidence suggests that these abuses of civilians appear to be much worse than those committed by the Nazis in the concentration camps such as Auschwitz.

The gruesome images were shot by a Syrian military policeman code-named “Caesar.” A forensic pathologist at the meeting Stuart Hamilton stated that the photos were smuggled out of Syria between 2011 and mid-2013 at the time of the escalation of the civil war in Syria. Around 5,500 photographs of 1,300 individuals were examined for authenticity by a team of investigators. The investigators concluded that the images were not digitally altered.

The photographs “Caesar” had taken were reportedly passed to the Syrian National Movement supported by Qatari government. The lawyers from the London-based Carter-Ruck and working for Qatar, commissioned the examination of the evidence

Qatar is one of the Arab nations denouncing the Assad regime and openly supporting the rebels in the three year standoff.

The French Ambassador to the UN Gérard Araud stated that France was preparing to urge the Security Council to refer the case of Syrian human rights abuse and crimes against humanity to the International Criminal Court. It is expected that Russia – and possible China – will veto the proposal. So far, Russia and China have vetoed three resolutions that would have condemned Bashar Al-Assad’s government and facilitated economic sanctions and brought those accountable for any war crimes to justice.

Despite the condemnation of Assad’s government over human rights abuse and war crimes in the last three years of war, the Western nations – to their credit – also stated that the crimes against humanity were committed by the rebel groups, as well, although crimes by the Syrian regime outdid the ones committed by rebel groups.

The photographer in question had been a senior sergeant in the Syrian Army and worked as a forensic photographer for the last 13 years before fleeing Syria. Between September 2011 and August 2013, he reportedly worked at a military hospital, snapping pictures of corpses, arriving at the facility from detention centers in the Damascus area. The pictures were then periodically smuggled by him out of the hospital on memory sticks hidden in his shoe. Once the opportunity allowed, he fled the country and delivered the pictures to the opposition group.

The conflict which by now has claimed over 150 thousand people, mostly civilians, is likely to continue and escalate as the United States and Russia exchange “favors.” The Ukrainian crisis will reignite new and exacerbate ongoing conflicts in a renewed Cold War where each superpower will make moves at the expense of battleground states like Syria and Ukraine.

Leaked recording: Russian paramilitary in Ukraine on the phone with Moscow

Geneva meeting concludes with a joint statement on Ukraine