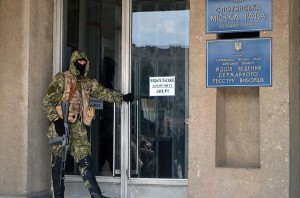 So, the leadership of the Western countries, concerned over the situation in eastern Ukraine found the common language with the ever defiant Kremlin. On Thursday the parties to the Geneva talks agreed on key points to resolve the impasse and restore piece in beleaguered Ukraine.

Russia certainly complied. On paper. Since the agreement did not involve partially or full removing Russian troops from the Russo-Ukrainian border – which by now reportedly amount to 80,000 servicemen – it is not bound by any commitment to physically demonstrate that it is in fact de-escalating the deteriorating situation.

In a nutshell, the talks concluded with the agreement that Russia, being in a position to influence separatist groups in Ukraine, must convince or rather facilitate withdrawal of Russian separatists from the occupied government buildings in several cities in eastern Ukraine.

The problem is that the separatist authorities which preside over the fate of the districts where the Kyiv government is undermined are not in formal vertical subordination to Moscow, but rather act “independently” of the Russian government. This is the most fundamental issue at stake which Washington fails to see. President Putin has made sure that there aren’t too much of a talk of unification with Russia, but there is an overwhelming conversation about these separatist entities declaring their own independent states.

The fact of the matter is that Kremlin learns fast from its mistakes. Whereas the invasion and annexation of Crimea caused an outrage from the international community, the de-facto annexation of eastern Ukrainian districts must follow a different scenario. And what better to assure the legality of the partition of Ukraine than the principle of self-determination?

Russia is unlikely to stop the momentum of the separatist movements in Ukraine in the foreseeable future and the West is likely to continue its efforts to impose hardships on the Russian economy. The reality is that Ukraine happens to be a key strategic component of Russia’s policy vis-a-vis the United States and its NATO allies in Europe. With its industrial capacity, military-industrial complex and energy transit routes, not only will Moscow lose what it had possessed for decades, but it’ll award the valuable advantage to its opponents. That’s why Vladimir Putin is eager to go the whole nine yards to ensure Ukraine stays in Moscow’s orbit, be it willingly or by force.

The only conceivable way Russia will accede to demands of the United States – and by a long extent of the international community – is when or if it faces similar threats to its sovereignty by its own club of separatists on par with its devastating economy, provided that the oil prices go down and newer sanctions are imposed on Moscow.

Russia had already fought separatists within its borders, most notable and incessant of them being in Chechnya. The difference is that Russia was not under sanctions and in fact, had been receiving aid from the West, and most notably, the international community was supportive of Kremlin’s fight against Islamist radicals in the troubled North Caucasus. Will it now be as supportive?