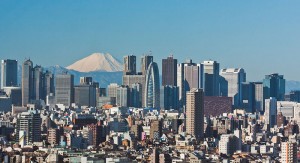 On his ongoing visit to East Asia, President Obama welcomed the “continuing rise of a China that is stable, prosperous and peaceful,” but was also quoted saying “our engagement with China does not and will not come at the expense of Japan or any other ally.”

With the simmering conflict between China and Japan over Senkaku Islands, administered by Japan but also claimed by China, the United States decided to act now rather than allow the situation deteriorate in a place vitally important for the economy of the United States.

The Chinese, energized by the rapid growth of its economy and high demand for energy in the last two decades, have taken an ambitious mission in bringing the geography of the continent under its orbit. Hydrocarbons are extremely vital for the continuous growth of the economy of the country with highest population on earth. This is why Beijing has sought and frankly, managed to secure important ports and stations in various countries in eastern and southern Asia. For instance, Chinese financed ports of Gwadar and Hambantota in Balochistan province of Pakistan and southern Sri Lanka, respectively, are among those important for Chinese maritime trade.

The Chinese think that transporting oil products via sea routes is a lot more secure than using onshore pipelines which are under risk of potential terrorist attacks. Using these ports, Beijing comfortably moves hydrocarbons from Africa and Persian Gulf to hungry Chinese consumers. Moreover, being in possession of the ports in the Indian Ocean creates counter-balance to the United States, especially the military base on Diego Garcia, right in the middle of the Indian Ocean.

With the expanding military of China and specifically, its navy creates a justifiable concern for Tokyo. Japan has old unresolved territorial disputes with China and Senkaku Islands is at the center of them. The issue came into the spotlight when the islands, previous private-owned, were sold to the Japanese Government in 2012 – an obvious slap in the face of Beijing. Since then, fighter jets of both countries scrambled against each other for more than 400 times.

President Obama’s visit underlines its support to its allies Japan and South Korea, the president’s stern message to the Chinese comes at the wrong time. At the time when China abstained in UN SC and UN GA voting in regards to the Ukrainian crisis, letting down its Russian ally, Washington could have given it some breathing room. An open support to Tokyo at a time when the sentiments in these Asian nations are reignited can only be interpreted as an aggressive attitude against Beijing. So, the next time a vote on Ukraine is put forth at the United Nations, don’t be surprised if China votes against the United States.

Where will Germany go? Revaluating German foreign policy in light of the Ukraine crisis