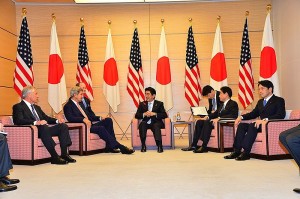 During their April 24 meeting in Tokyo, Japan, President Barack Obama and Prime Minister Shinzo Abe affirmed U.S.-Japan joint engagement and cooperation with Southeast Asian countries; trilateral diplomatic, economic, and security coordination with like-minded partners;and global development cooperation as priorities in the bilateral relationship.  Through these initiatives, we are working to foster economic prosperity, maintain stability, counter proliferation, stand up for gender equality, and promote universal values in the Asia-Pacific region and around the globe.

Cooperating Together with Southeast Asia

The United States and Japan share a long history of positive engagement in Southeast Asia.  As the Association of Southeast Asian Nations (ASEAN) increasingly embraces unity toward the establishment of the ASEAN Community by 2015, we intend to deepen joint engagement and cooperation with the countries in the region.  The United States and Japan are enhancing collaboration in the East Asia Summit (EAS), the ASEAN Regional Forum (ARF) and the ASEAN Defense Ministers’ Meeting (ADMM)-Plus in order to strengthen the capacity of these regional fora to promote regional stability and prosperity.

The United States and Japan welcome efforts to promote democratic values in this region.  In this context, the United States and Japan acknowledge the tremendous progress Myanmar has made over the past several years, but note continuing challenges.  Both countries reaffirmed their commitment to supporting Myanmar political and economic reform and national reconciliation efforts.

Our two countries place a high priority on working together to reduce disaster risk, provide humanitarian response, and assist in the creation of disaster-resilient societies in Southeast Asia and around the globe, as demonstrated most recently by our coordinated response to the destruction caused by Typhoon Haiyan.  The U.S. Federal Emergency Management Agency and Japan’s Cabinet Office intend to enhance cooperation on our respective emergency and disastermanagement capabilities through the exchange of lessons learned from disasters.  The United States and Japan are also cooperating in providing new support for the ASEAN Agreement on Disaster Management and Emergency Response (AADMER) Work Program Phase 2.  Additionally, our two countries are strengthening coordination with ASEAN nations in disaster risk reduction and relief through the ASEAN Coordinating Center for Humanitarian Assistance on Disaster Management (AHA Center), which serves as the hub of ASEAN’s disaster risk reduction efforts.  In this context, we welcome the success of Information and Communication Technology system support from Japan as well as assistance from the United States in developing risk assessment guidelines and improving dissemination of information on natural disasters throughout the region.

The United States and Japan have committed to coordinating our capacity building assistance on maritime safety and security for Southeast Asian countries, including on the provision of patrol vessels and development of port facilities.  We are working together to strengthen shared rulesand principles of international law.  Both countries welcome ASEAN’s efforts to coordinate and develop common practices, consistent with international law, that allow ASEAN as a whole to implement effective and timely responses to maritime safety and security incidents.  The United States and Japan are conducting further discussion with ASEAN on additional assistance, including offering education and training to maritime safety officials of ASEAN members.  The United States welcomes that Japan supports the Expanded ASEAN Seafarers Training (EAST) initiative proposed by the United States under the framework of the Expanded ASEAN Maritime Forum (EAMF) in the field of Maritime Environmental Awareness. The two countries are also emphasizing the need to strengthen cooperation in building the capacity of aviation safety in Southeast Asian countries.

The United States and Japan share a common commitment to engaging other states, in particular those in the ASEAN region, in building their capacity for an open, interoperable, secure and reliable cyberspace.  In support of that commitment, the United States and Japan are collaborating on international and regional efforts to address cybersecurity incident response, to deter high tech crime, and to develop cyber confidence-building measures to reduce risk.

The United States and Japan share the view that landmines and unexploded ordnance in Southeast Asia are not only a humanitarian issue, but also impede the maintenance of peace and stability and hinder development efforts.  Both countries reaffirmed their intention to strengthen cooperation on addressing this issue and support regional cooperation through multilateral fora, such as ASEAN.

The United States and Japan work closely with third-country partners to advance our shared commitment to security, stability, and prosperity in the Asia-Pacific region and around the world.  For example, trilateral cooperation among the United States, Japan, and the Republic of Korea seeks the complete and verifiable denuclearization of North Korea, a goal our three leaders recently reaffirmed at their summit in The Hague.  We are prepared to take further actions in response to North Korean provocations and its refusal to fulfill its international commitments regarding its nuclear and missile programs.  In order to respond to North Korean nuclear and missile threats, the United States and Japan recognize the importance of trilateral information sharing among the United States, Japan, and the Republic of Korea in a way that contributes to a comprehensive and cooperative response against such threats.  The April 7 meeting of the U.S., Japanese, and the Republic of Korea Six Party Talks representatives and April 17-18 Defense Trilateral Talks demonstrated our commitment to close coordination on our diplomatic and security policies towards North Korea.  We have also joined together to urgeNorth Korea to address the systemic and gross human rights violations being perpetrated on its people, and to address the conclusions and recommendations in the UN Commission of Inquiry report including regarding the matter of abductees.

Under the auspices of the Trilateral Strategic Dialogue (TSD), the United States, Japan and Australia enjoy regular and high-level coordination on key issues such as nonproliferation, counterterrorism, regional stability, and sustained economic prosperity.  In the TSD, working-level counterparts from our three countries interact in subcommittees focused on Pacific Islands issues, Southeast Asia, counterterrorism, and nonproliferation.  Additionally, defense and foreign affairs officials cooperate under the auspices of the Security and Defense Cooperation Forum (SDCF), which since 2007 has focused on areas such as humanitarian assistance and disaster relief, regional capacity building, maritime security, and the state of regional security affairs.

The United States and Japan also have a robust trilateral dialogue with India on a wide range of regional and global issues, including, in particular, cooperation in the area of maritime security in the Indian Ocean and Western Pacific, the development of an Indo-Pacific economic connectivity corridor among the countries in the region to enhance regional connectivity, and humanitarian assistance and disaster relief.  The sixth iteration of our trilateral meeting is scheduled to take place in New Delhi early this summer.

Advancing Development around the World

The United States and Japan are closely united in the cause of alleviating human suffering by ending extreme poverty, increasing economic opportunities, and enabling resilient, democratic societies.

On February 20, we convened the inaugural meeting of the senior-level U.S.-Japan Development Dialogue in Washington, D.C.  During the Dialogue, the United States and Japan discussed deepening our bilateral development cooperation on a wide range of development challenges, including women’s economic empowerment and security, disaster risk reduction, and regional cooperation in Southeast Asia and the Pacific Islands.  We are also committed to enhancing our dialogue on creating an ambitious, compelling post-2015 development agenda.

The United States and Japan are actively engaged in promoting women’s security and empowerment worldwide.  In India, the United States and Japan are jointly supporting the UN Women Safe Cities Program in Delhi.  The Delhi initiative is a part of the UN Women’s “Safe Cities Free of Violence against Women” Global Program, which aims at preventing sexual violence in urban public spaces through strategic alliances with communities, service providers and safety officials while empowering women and girls.

As part of Japan’s strong commitment to African development evidenced through the TICAD (Tokyo International Conference on African Development) process, including the First TICAD V Ministerial Meeting to be held in Yaoundé, Cameroon, May 2014, and in recognition of the proven value of giving women the tools to start their own businesses, both countries are working together to empower African women entrepreneurs.  The United States also took part in a Japanese-led program for African entrepreneurs and government officials in Yokohama, Japan, in February, and Japan is supporting the U.S. International Visitor Leadership Program for African female entrepreneurs in summer 2014.  The United States and Japan are also collaborating to provide professional development and capacity building services to African women entrepreneurs through the U.S. African Women’s Entrepreneurship Program and the Japan-Africa Business Women Exchange Program.  Moreover, the U.S. Agency for International Development (USAID) is partnering with the Japan International Cooperation Agency and Japan’s Ministry of Foreign Affairs to coordinate global food security assistance efforts in Tanzania, Ghana, Rwanda, Senegal, and Mozambique.  Japan welcomes the United States’ announcement of the first-ever U.S.-Africa Leaders Summit, to be held in Washington in August 2014.

Looking to the Future

The United States and Japan continue to seek ways to use our global partnership to promote peace, resiliency, and prosperity in the Asia-Pacific region and around the world.  We look forward to continuing our close coordination efforts into the future.