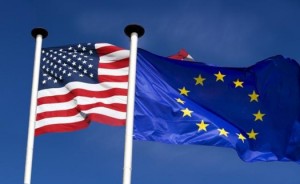 Business and Governments try to combat an information deficit, and save a blockbuster trade agreement

Another round of negotiations concluded last week for the massive trade treaty known as the Transatlantic Trade and Investment Partnership (TTIP) between the United States and the European Union. Billed as the largest trade pact in history, the agreement is poised to solidify an economic relationship that accounts for almost half of world GDP. A far-reaching pact, positioned as a central part of the Obama administration’s legacy, is projected to create 1.1 million jobs in the US, and over 1.3 million in the EU while adding $130 Billion and $161 million to their respective GDPs. However, despite what governments are selling as a win-win for consumers and producers, the deal is starting to meet with intense opposition. Controversy over topics like chlorine-washed chicken, investment dispute resolution, and fears of lowering health and labor standards have led to a torrent of negative publicity in the EU. A European Citizens initiative (ECI), aiming to collect one million signatures to force the European Commission to drop TTIP, was launched early last week and the so-called “European Quarter” of Brussels, home to many EU Institutions, is festooned in anti-TTIP Graffiti. Meanwhile, in the US a lack media reporting has led to a much lower level of interest in the accord. One report found that between January and August 2013, TTIP was covered in-depth by major outlets only 20 times.  TTIP is sailing into some strong headwinds. But why?

A main factor is the air of secrecy that surrounds the agreement. Confidentiality among both government and non-government participants has indeed been a hallmark of the discussions and consumer groups, environmental organizations and unions have frequently complained of being shut out of negotiations. Critics point to the fact that the majority of TTIP provisions publicly known were obtained only through leaks, and to the non-disclosure agreements that must be signed by all participants as evidence of the deal’s secretive nature. Further fueling NGO suspicion, business groups are included in consultations. This has led to allegations that corporate interests are leading the negotiations, at the expense of the environment, health and even national sovereignty. NGOs, particularity in the EU, have filled the void left by the silence of government and business with declarations of a corporate takeover of the transatlantic economy, with some groups claiming the EU is selling off the “crown jewels” of European state health and social policy in the deal. European fury has focused most intensely on the possibility of GMOs and hormone injected beef appearing on store shelves,  American safety standards threatening health, and the investor-state dispute settlement (ISDS) provisions, portrayed by many NGOs as a ploy for American corporations to use “secret courts” to sue states for laws they don’t like.

TTIP proponents in governments and the private sector seem blindsided by the pummeling the treaty is receiving. In their view confidentiality is the norm when negotiating trade deals. They bristle at what they see as gross mischaracterizations of ISDS, especially when they point out that ISDS provisions in existing bilateral investment treaties among all the parties to TTIP are far more generous to investors than the ISDS provisions in TTIP, and that the modern practice of ISDS was pioneered in Germany not a corporate boardroom in Manhattan. On the subject of resistance to GMOs, U.S. secretary of agriculture Tom Vilsack lamented the fact that American officials have yet to find an effective way to communicate the “sound science” behind the cultivation and consumption of genetically modified crops. Both governments position’s on regulatory harmonization could be effectively summed up by an audience member of the ECI press conference who posited that, despite the European perception of a regulatory Wild West in the US, “Americans seem to be doing alright” and “not dying in the streets”. Pro-TTIP groups acknowledge that the narrative is beginning to run away from them, and more organized NGOs are scoring key victories in the battle to define the deal.

Belatedly, Governments and business, alarmed at what they see as a misinformation campaign sinking a deal critical to both the US and EU economies, are starting to fight back. The European Commission has begun releasing online surveys on TTIP topics to gather input from the general public, while both the EU and US governments have started convening civil society dialogues  (The most recent of which was interrupted by chanting  Anti-TTIP protesters when the negotiators opened the floor to questions) for discussion with registered groups that take place regularly during negotiating rounds. The US embassy in Berlin is even offering grants for groups to help sell TTIP in Europe. BusinessEurope, Europe’s largest business lobbying group, and the US Chamber of Commerce are planning a summer tour of Europe to discuss the benefits of TTIP while the American Chamber of Commerce to the EU organized a series of data protection events to allay European fears about data privacy in the deal. In the US, the Trans-Atlantic Business Council, a group comprised of both American and European companies, is launching an 8 city US roadshow hitting Indianapolis, Charlotte and San Francisco, among others, to help increase TTIP awareness outside of Washington, and sell its benefits to average Americans.

At the moment the general public still favors an agreement, and officials are still confident a deal can be reached late this year or early next year. This timeline however, could be further complicated if momentum stays with NGO groups. If government and private entities want the deal to be successful, they need to step up their efforts in informing and engaging the public, otherwise they risk turning a potential transatlantic boom, into a universal bust.

Joe Losavio is a Master’s student at the Johns Hopkins University-School of Advanced International Studies (SAIS). His area of concentration is International Relations and Economics with emphasis in International Law and Organizations