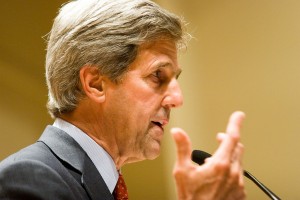 The following is the statement by the U.S. Secretary of State John Kerry:

“Today, we mark a milestone in our unrelenting work to ensure the end of the Assad regime’s deadly chemical arsenal:  the United States has finished neutralizing the regime’s deadliest chemical weapons aboard the Cape Ray.

We do so mindful of a tragic milestone fast approaching this Thursday:  the one year anniversary of Assad’s bone-chilling, deadly chemical weapons attack that killed more than 1,000 innocent Syrians, including so many children in the suburbs of Damascus.  No one can or ever will wipe away that memory.  The images of children suffering at the hands of a monster’s illicit arsenal reminded all the world why these weapons have long been shunned by the civilized world and revealed for any who still doubted the true face of Assad.

These two milestones, one born out of the other, more than just dates on the calendar, are also moments to take stock of the road ahead.  In record time, even amid a civil war, we removed and have now destroyed the most dangerous chemicals in the regime’s declared stockpiles.  But much more work must be done.

First, the international community has important questions with regard to discrepancies and omissions related to Syria’s chemical weapons declaration.  Second, Syria must complete the destruction of its remaining chemical weapons production facilities within mandated timelines.  Third, we also remain deeply concerned by reports of systematic use of chlorine gas in opposition areas, as described by the fact-finding mission of the Organization for the Prohibition of Chemical Weapons.  Each and every one of these issues must be fully resolved.

Lastly, but most importantly, the Assad regime’s brutality must come to an end.  Assad lost any legitimacy to lead Syria long before he gassed his own people to death.  The United States will continue to provide political, financial, and other support to the moderate opposition because we are committed to help those who seek the right of all Syrians to choose a future of peace and oppose the violent extremists who exploit the chaos and ruin that Assad has brought to Syria.  A free Syria where people can live without fear is a milestone we should all be committed to achieve together.”