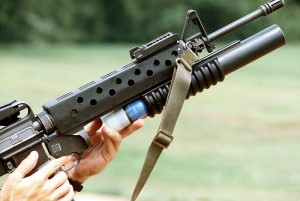 The Lebanese army on Friday received a consignment of weapons from the U.S. for the ostensible purpose of securing the country’s borders and confronting extremist groups, U.S. Ambassador in Beirut David Hale has said.Hale told a press conference, held on the occasion of the arrival of the arms shipment to Beirut Airport’s military airbase, that the U.S. was working to provide all the weapons and ammunition requested by the Lebanese army to allow the latter to secure the borders and defeat extremist groups.He added that Friday’s arms shipment was the last of three to be delivered within the last 36 hours in response to requests by Lebanese Prime Minister Tamam Sallam.Friday’s consignment included 1,000 M-16 assault rifles, according to Hale, while an earlier batch – delivered yesterday – included 480 anti-tank missile launchers and 500 M-16 rifles.Other consignments of heavy ammunition will be provided by the U.S. to Lebanon within the coming few weeks, Hale affirmed.Brig. Manuel Kirejian, who represented the Lebanese army at the press conference, described recent fighting between Lebanese troops and militants in the town of Arsal on the Syrian border as “extremely dangerous in view of recent developments in the region.”In early August, Arsal – from which the so-called “Islamic State” militant group recently captured a number of Lebanese soldiers – saw intense fighting between militants and Lebanese troops.At least 17 of the latter were killed and 86 injured in the recent fighting.The violence broke out after gunmen – said to be “Islamic State” militants – attacked security and army sites in Arsal, abducting a number of residents and troops in retaliation for the recent arrest of a rebel leader.The violence has largely destroyed a number of refugee camps that cater to thousands of Syrian refugees, prompting many to flee.Along with the influx of hundreds of thousands of war-weary refugees, Lebanon has been hard hit by the conflict in neighboring Syria.The country has also witnessed a recent surge in militant attacks in response to Hezbollah’s role in Syria, where the Shiite faction has continued to fight alongside Syrian regime troops against heavily-armed opposition forces.By Gad Yateem

Cracks in a prosecution far from home

Can Central Asia be stuck between Iran and Saudi Arabia?

Cracks in a prosecution far from home

Can Central Asia be stuck between Iran and Saudi Arabia?