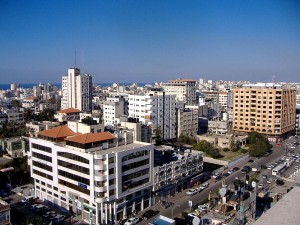 Israel’s Finance Minister on Sunday called on international leaders to hold a regional summit focused on demilitarizing and reconstructing the Gaza Strip, which was devastated following Israel’s military offensive against the Islamist Hamas movement.

But Finance Minister Yair Lapid said that Gaza’s reconstruction should be conditional on whether or not Hamas is demilitarized to ensure Israel achieves its diplomatic goals.

“We had major military achievements and have now moved to the diplomatic front,” Finance Minister Yair Lapid told a press conference for foreign media in Jerusalem.

According to Lapid’s proposal, reconstruction support should only be given in exchange for a complete disarming of the coastal enclave. Only then can regional and international donor countries, which are scheduled to meet in New York on September 22, help rebuild the war-torn enclave.

“Israel must act before that to avoid a conference in which Gaza gets support and Israel gets nothing,” Lapid said.

“We need a regional conference with the Egyptians, the Saudis, the Gulf States and representatives of the quartet,” he added.

Israel and Hamas agreed to an Egyptian-brokered truce deal on August 26, after more than 50 days of war that claimed the lives of at least 2,100 Palestinians and 73 Israelis.

Lapid, a senior member of the Israeli cabinet, said he already got some positive reactions from Prime Minister Benjamin Netanyahu and Germany’s Foreign Minister Frank-Walter Steinmeier.

“The prime minister was very positive towards the idea and we are working together and therefore I’m optimistic,” he said.

Hamas, the Islamist movement who controls Gaza, has rejected demands for demilitarization, saying they will never end their ” armed struggle against the Israeli occupation.”

Israel said it embarked on the offensive in Gaza in order to halt rocket fire targeting its territory. And Hamas has demanded that Israel lift its eight-year crippling blockade on the enclave.

According to initial estimates by the Finance Ministry, Israel has paid heavy price for its offensive in Gaza, which cost it as much as 9 billion shekels (about 2.55 billion U.S. dollars).

On Sunday, the cabinet approved a 1.5 billion shekel cut (about 42 million dollars) in its 2014 budget in order to offset the costs of the war.

The two percent cut will minimize the impact of the war on the country’s looming deficit but is expected to provide another blow to Israel’s declining growth.

Hoteliers said the war was catastrophic for their business. Tourism, which comprises seven percent of the economy, saw a 26 percent decline in July.

“We expect a small decrease in growth as a result of the operation, particularly due to the impact on tourism,” Lapid said. But he added that Israel’s high season for tourism is in October and May, when scores of Jewish tourists visit the country for the Jewish holidays.

“So we still have a hope for quick rebound,” Lapid said. “We are going to be proactive about helping tourism.”

US delivers weapons to Lebanon

Georgi Parvanov: Bulgaria 'cannot be a hawk' on Russia