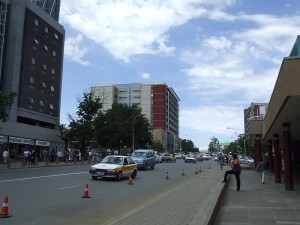 Zuma is scheduled to consult with King Letsie III and hold discussions with leaders of the coalition government to assess the progress in the implementation of the Windhoek Declaration, as well as other decisions made by the Southern African Development Community (SADC).

Zuma, current Chair of the SADC Organ on Politics, Defense and Security, has been facilitating a political solution to the crisis.

Zuma’s visit follows the Ministerial Committee of the SADC Organ meeting on Aug. 31 as well as his meeting with the Lesotho coalition leaders on Sept. 1 in Pretoria.

“The visit by President Zuma demonstrates a clear commitment by SADC to assist the coalition leaders to implement the Windhoek Declaration, as well as to assist the kingdom to restore peace and stability,” Zuma’s office said earlier.

On Aug. 30, the Lesotho military seized the police headquarters and the Mabote police station in Maseru, claiming that police officers intended to pass arms and ammunition to Thabane’s All Basotho convention called “Under the Tree” (UTTA).

Police are loyal to Thabane, while the military support his deputy Mothetjoa Metsing.

The army also raided the residence of Thabane, who had fled the country to South Africa hours before the coup.

The SADC intervened and brought leaders in the coalition government to an agreement which allowed Thabane to return home to continue his duties, particularly to re-open parliament.

Thabane dissolved parliament in June to avoid a vote of no- confidence.

After returning home following the coup, Thabane pledged to re- open parliament on September 19.

But Thabane insists that his decision to remove Army Commander General, Tlali Kamoli would not be changed.

The decision triggered the military coup in the mountain kingdom over the weekend.

Thabane on Monday postponed the re-opening of parliament, saying because he wanted to ascertain who is in charge of the country’s army.

Thabane said he was still adamant that his decision to fire Kamoli still stands.

Ntoli dismissed reports that Kamoli has looted weapons and fled with a group of soldiers to the mountains in preparation for war against the government.

BRICS declaration and the shifting equations

Currency dictatorship – the struggle to end it

The rise of multi-polarity is threat to Western imperialism

Russia: Attempting a bridge to Africa

BRICS declaration and the shifting equations

Currency dictatorship – the struggle to end it

The rise of multi-polarity is threat to Western imperialism

Russia: Attempting a bridge to Africa

Nature’s fury in Jammu and Kashmir