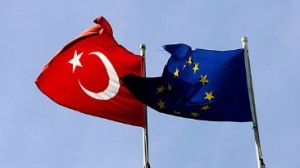 Addressing press members Thursday before starting his visits in Brussels, Bozkir said Turkey’s new strategy towards the European Union has three legs; “Determination in the Political Reform Process, Continuity in Socioeconomic Transformation in the Accession Process and Effectiveness in Communication”.

“National Action Plan for EU Accession” will be implemented in two periods: the first period will last until 2015 and the second will cover the period of 2015-2019,” said Bozkir, hinting at the successful closure of Turkey’sEU membership bid chapters.

“Turkey’s own progress reports do not have any value regarding the system,” he said, adding the upcoming report should be functional both for the EU and Turkey, warning that an “inappropriate tone” in the report would cause more problems.

In three weeks the EU will issue an accession progress report on Turkey’s efforts to meet EU standards.

Prepared around the principles of “determination, continuity and effectiveness”, the strategy has three main pillars: “Political Reform Process, Socio-economic Transformation in the Accession Process and EU Communication Strategy”.

“Prioritizing Turkey’s interests and benefits of the citizens, the new strategy will lead to a boost in the reform process and establishment of new communication channels between Turkey and the EU,” said a written statement by Turkey’s European Union Ministry on Thursday.

About the political reforms, the strategy will focus on “further advancing the reforms of the last twelve years in the fields of rule of law, democratization, human rights, civilianization, freedom and security and consolidating the related gains will be the basis of the political reform process in the upcoming period”.

The political reform also includes “removing the imprints of Turkey’s military coup in 1980” and “continuation of the reform process in line with the EU acquis”.

About the “Socio-Economic Transformation in the Accession Process”, the strategy says the process requires fundamental changes in all fields of daily life from production to consumption, justice to security, health to education, agriculture to industry and energy to environment.

“Each political, judicial, economic or social reform implemented on the path to the EU accession upgrades the living standards of the citizens and increases the economic power, democratic prestige and security of our country on the global scale,” the manifest added.

Last component of the newly announced strategy is “European Union Communication Strategy”, which hails the support the political and socio-economic reforms that have changed the outlook of Turkey with “tailored communication efforts”.

“A successful communication strategy does not only serve to adoption of the reforms by the nation, but also help underpin the external image of the country with the facts instead of misperceptions,” the manifest added.

The manifest can be accessed at “http://www.ab.gov.tr/files/foto/eu_strategy.pdf”