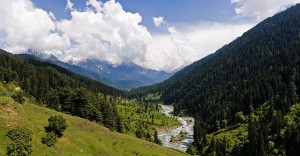 Speakers at a seminar, held in Muzaffarabad, the major city in Pakistan Administered Kashmir (125 km from Islamabad) urged India and Pakistan to maintain peace in Kashmir.

The seminar was organised by Press for Peace, a civil society organisation working for the establishment of permanent peace in conflict zone Jammu & Kashmir.

The representatives of Press for Peace, speaking at the occasion of the World Peace Day, highlighted that a generous help of flood-affected people of Jammu and Kashmir by both India and Pakistan would create an atmosphere of trust, harmony and pleasant relationships among the communities living across the Line of Control (LoC) – the boundary that divides them.

The speakers emphasized that a negotiated settlement of long-term conflict would bring about new opportunities for social transformation. The demand to rebuild divided society of Jammu & Kashmir necessitates a clear and proactive role by global community. The challenges emerging from serious long-term conflict are overwhelming and require concentrated efforts by peace loving nations of the world to initiate progressive activities.

The humanitarian crisis after massive floods in Jammu and Kashmir could be availed as an opportunity for peace building through softening the borders in disputed state. The speakers demanded to India to allow access of aid workers from Pakistan administered Kashmir in order to participate in humanitarian work in flooded areas at the Indian side of the conflict zone.

The speakers highlighted that the governments of India and Pakistan should expedite the repair work of infrastructure in flood-hit districts and immediate measures should be taken to resume normal civil life. Amid a lack of tangible progress on important civil affairs; whether it is the development of infrastructure or equal sharing of resources among local people, Kashmiri peoples’ dreams of permanent peace in the region cannot be fulfilled. They also pressed the need of lifting of barriers at the crossing points and allowing the transportation of relief items to flood-stricken areas in Indian Jammu & Kashmir.

A prominent speaker, the leader of Opposition in the Legislative Assembly Raja Farooq Haider said that increased violence and aggression around the world had created a sense of alienation and deprivation among the oppressed communities of the world.  He stressed the need of a focused struggle from global community to dissolve the longstanding Kashmir issue.  Without giving consideration to the aspiration of the people of Jammu and Kashmir, world cannot be a peaceful place to live, he urged.

The seminar was organised by Press for Peace as a part of consequential activities to stimulate public debate and keep alive the prospect of dialogue on the peace process.  It was attended by local politicians, peace activists, journalists, students and members of various civil society groups in Pakistan Administered Kashmir and Gilgit Baltistan.

Mazhar Iqbal is a peace and human rights activist from Pakistan-administered Kashmir, and has written for a number of newspapers, magazines and websites. Born and raised in a conflict area, he has a natural bent to study and reflect on the happenings across the Line of Control (LOC) in Kashmir. Thus, generally but not exclusively focus of his writings is on situation of human rights, peace and political developments in this zone. He is associated with Press for Peace and can be reached at [email protected]

Democracy and the West: History, theory and practice