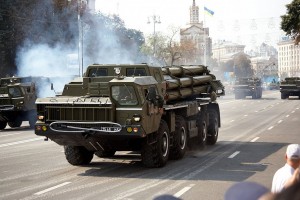 Ukrainian forces beefed up its defenses along the frontline with territories controlled by independence-seeking insurgents in the country’s east as fighting has intensified over the weekend, a military spokesman said here Monday.

“We have already prepared a first line of defense, reinforced our units, withdraw additional defensive means and weapons from storages and geared up additional troops,” said Andrei Lysenko, spokesman for the National Security and Defense Council.

Lysenko accused insurgents of attacking Ukrainian positions across Donetsk and Lugansk regions during the weekend and preparing a fresh offensive aimed at breaking into the territories controlled by the government forces.

Over the past 24 hours, six government soldiers were killed and nine were wounded in the fighting with rebels, Lysenko said.

Separately, the press service of the government’s military operation in the east said Ukrainian forces over the past day killed 23 insurgents, who tried to storm the government-controlled airport in the city of Donetsk.

Authorities of Donetsk have reported some of the heaviest shelling in the city during the weekend since the truce between government forces and rebels came into force on Sept.5.

The fighting killed a civilian and wounded eight other people, the Donetsk municipal council said, adding that several houses and public infrastructure facilities were damaged or destroyed during the shelling.

Since fighting flared up in mid-April in Ukraine’s Donetsk and Lugansk regions, more than 4,132 people have been killed, over 9,747 wounded and some 445,176 others displaced.

Georgians march in defiance of the simmering Russian-Abkhazian pact

Number of US students studying abroad doubles in 15 years: Study