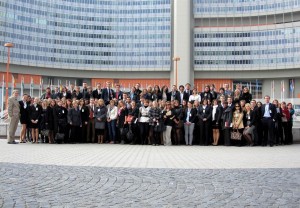 With the present study “Nuclear Commerce– Essentials. Politico-military, security, legal and socio-economic aspects” professor Bajrektarevic, aided by his assistant Ms. Posega, brings a valuable retrospective on the fundamentals of Nuclear Commerce – a special area which crosses the lines of strict commerce onto the international relations and diplomacy, and security. This of course includes the entire N-regime (so-called NPT system), its instruments and institutions, contextualizing also the issues of declared and non-declared nuclear powers as well as the countries holders of (or seekers for) the N – turn-key capabilities. To this end, a due reference is made on the so-called nuclear hedging – for authors a tricky walk between less known facts and guessing game. The attached is the compact content and fresh data-rich report with the updated charts and indexes. (Early version was published by the magazine of the Canadian energy institute /CERI – 36(9+10) 2014).

One of the issues of central concern to Prof. Bajrektarevic and his collaborator Posega is related to Climate Change challenge: how to make the transition from carbon- based energy sources to more GHG- friendly, yet robust forms of energy such as nuclear power. Indeed, when one considers the various alternatives available today- solar, wind, carbon-neutral bio-fuels, etc- none has anywhere near the potential of nuclear energy to produce the Terawatts demanded by an almost insatiably energy-hungry planet. N-power must be a major compo-nent of a post- carbon energy mix. To suggest otherwise is unrealistic, argue the authors.

Prof. Bajrektarevic and Posega also note that as peaceful nuclear development is essential, the cold- war mindset that persists among some nations must change: »we would beg to differ on the logic that continuous threat perception is good and beneficial for the world«.

Additionally, authors consider the nuclear commerce regime and legal frameworks that must remain in place for future development of the nuclear industry. At the core of their argument is the idea that nuclear must be a major component of any future global energy mix that eliminates or greatly reduces the role of carbon- based fossil fuels. But in order to make nuclear commerce more prolific and at an affordable politico- security and economic- social price, there must also be adequate safeguards established in the nuclear industry in order to earn the trust of a public grown skeptical after Three Mile Island, Chernobyl and Fukushima disasters. Readers may also be interested in the authors` discussion of future technologies- plausible solutions to ongoing issues such as the massive costs of new- build reactors, nuclear safety and the storage of nuclear waste.

Overall, this study examines every important aspect to nuclear power, with the emphasis that the selected topics have on the nuclear commerce regime and trends, as the gateway to more prolific use of nuclear energy in the new future energy mix, where nuclear power should be in a vanguard.