The Trump Administration is instituting new tariffs on steel and aluminum imports designed to help American companies retake domestic market share. However, the action will have far reaching long and short-term harmful economic consequences on American consumers and companies.

On March 1st, 2018 President Donald Trump stated that his administration will implement tariffs on imported steel and aluminum products. The policy is designed to help American steel and aluminum manufacturers in their continuous conflict against foreign companies who produce cheaper products and have a large share of the United States market. However, many economists strongly criticize the move as a step toward an unwanted trade war and state that American consumers will eventually suffer dire economic consequences.

The Trump Administration, following the recommendations of Commerce Secretary Wilbur Ross, and the Director of the White House National Trade Council Peter Navarro, as well as numerous executives from American steel and aluminum industry manufacturing firms, announced the imposition of tariffs amounting to 25 percent on imported steel and 10 percent on aluminum. There was no stated time restriction for the duration of the tariffs.

The tariffs would be revealed in detail the following week and would be enforced under a rarely imposed Cold War regulation permitting the nation’s chief executive to limit any imports that are regarded as a threat to the nation’s security using broad discretionary powers. In Trump’s announcement, he stated that, “I want to keep prices down, but I also want to make sure that we have a steel industry and an aluminum industry, and we do need that for national defense. If we ever have a conflict, we don’t want to be buying the steel from a country that we’re fighting because somehow that doesn’t work very well.” Specifically, the tariffs will be implemented under Section 232 of the Trade Expansion Act of 1962.

From a political perspective, the tariff also reflects Trump’s trade policy of “America First” that he has been touting since his presidential campaign.

Implications of Steel and Aluminum Tariffs

Even though the move is designed to protect America’s steel and aluminum manufacturing industry, there are possible severe economic and financial implications in which the costs will outweigh the benefits.

First, there will likely be retaliation by nations that export steel and aluminum products to the United States. Among the nations retaliating will be Canada which exports significant amounts of steel to the American market. Canada’s Foreign Minister, Chrystia Freeland stated that, “Should restrictions be imposed on Canadian steel and aluminum products, Canada will take responsive measures to defend its trade interests and workers.”

In 2017, Canada exported $5.53 billion in steel to the United States, followed by South Korea at $3.11 billion and Mexico at $2.97 billion making up the top three. Canada also exported $6.918 billion in aluminum products to the United States in 2017, while China exported $1.809 billion and Russia sent $1.571 billion in goods for the same year. These countries will not take Trump’s actions lightly and will do what they can to protect their manufacturers. The Chinese foreign ministry stated in response to the Trump plan that, “The U.S. has overused trade remedies” and that “China will take proper measures to safeguard its interests.”

Nations such as Canada and China could start implementing tariffs on American steel and aluminum imported to their nations. This will ultimately hurt American manufacturers and will probably mean cutting production and even laying off workers. Many of these American firms are located in states that voted Trump into office as president in 2016. Trump will then have to answer to these laid off workers as to why they no longer have a job due to his administration’s tariff policies. According to a report from Reuters News Service, the European Union is mulling over the possibility of instituting tariffs of 25 percent on approximately $3.5 billion of imported goods coming from the United States if the Trump policy is carried out. 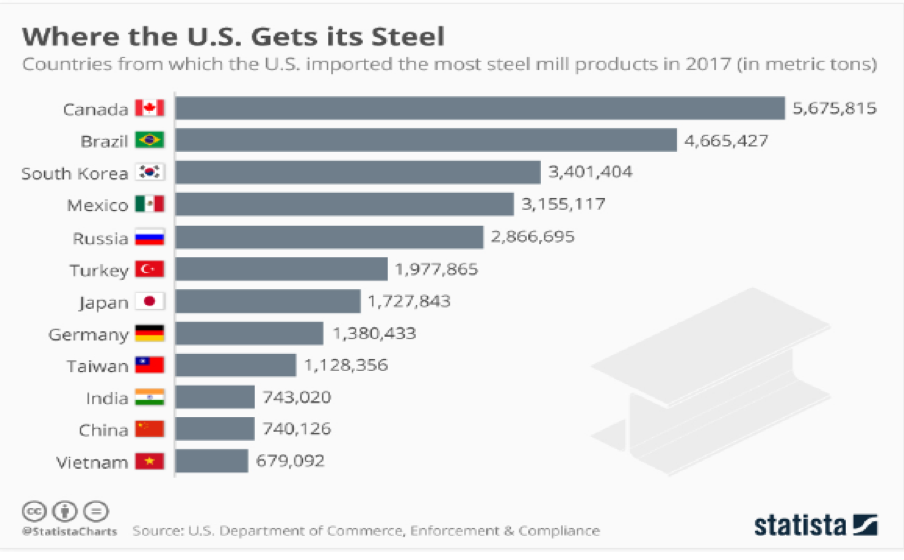 American consumers will now pay more for products that use steel and aluminum. For example, products such as automobiles, food product containers, and household appliances using steel and aluminum will see prices increase. The beverage industry will see increased costs for aluminum cans for drinks such as soda, beer, and energy drinks. According to the Beer Institute, a trade group representing beer makers, the proposed aluminum tariff will amount to a $347.7 million tax on brewers and the cost will either be passed on to consumers or result in the loss of many jobs.

American farmers will likely get hurt since steel and aluminum exporting nations will retaliate by imposing tariffs or import quotas on American agricultural products. This means that nations such as China will impose tariffs or quotas on American agricultural products such as soybeans in which it imported $12.4 billion worth in 2017 for animal feed. China could also retaliate by importing soybeans from other nations such as Canada and Brazil thereby further hurting the economic situation of American farmers. There is also the possibility that other nations will place tariffs and quotas on American-grown corn, wheat, and barley, to name a few. American farmers will find themselves in a real dilemma if they see their exports decrease due to a tariff on foreign steel and aluminum. 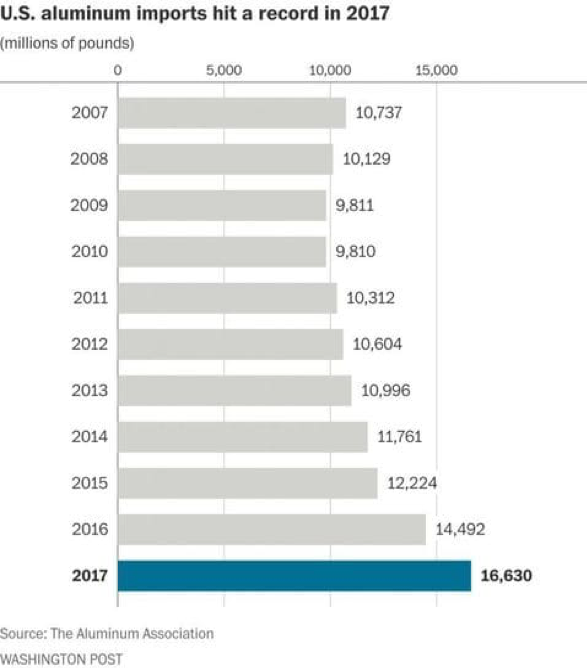 The shocking aspect of this tariff plan by the Trump Administration is that it represents its misplaced priorities. Rather than concentrating on furthering research and development for such areas as artificial intelligence, as the Chinese are presently doing, the Trump Administration is more concerned about an industry that is going more toward the use of high technology in order to produce a cheaper and better product that meets modern needs. Rather than emphasizing the need for better manufacturing process or training workers to be more productive and contribute to making a world-class product, the Trump Administration would rather start a trade war that will have no winners in the long run. Despite Donald Trump’s recent tweet that “trade wars are good” and that using tariffs to gain a comparative advantage is “easy”, there will actually be more harm than good to the American and global economy.