This meeting will hold significant importance in history and scenario planning, structuring a long-term business relationship and the defense playground for both the countries. Trump is a businessman and Putin ex KGB, both will use it for their best-vested interest. These leaders have a unique skill set and experience under their belts; they are also experiencing new realities, their actions are attention-grabbing and making headlines. They are the leaders of unique skill set leading two arguably hostile powers.

Trump believes in keeping America first and making America great, but still requires new alliances even with the least favorite allies, to control deep reliance on old and existing business partners in the overall structure. There will be major business gains and opportunities for both the countries.

He is a doer and achiever and makes things happen such as one of Trump’s biggest early deal was rescuing the once-grand Commodore Hotel from bankruptcy and transforming it into the Grand Hyatt.

This Trump quote summarizes his philosophy: “Success comes from failure, not from memorizing the right answers.”

Mr. Putin is a versatile President and trained KGB intelligence veteran. Putin Quote: ‘The task of the government is not only to pour honey into a cup but sometimes to give bitter medicine.’

There is no shred of doubt that, despite tough challenges, Putin has emerged Russia as a more progressive player in the  forefront of the world platform. Details in my article Putin’s Russian elections: Geopolitical impacts, economic and foreign policy, and international business. He will attend this one-one-one meeting well-prepared. Regardless of how it plays out, it will absolutely benefit him on his home ground and help him level the playing field.

There is definite encouragement, as Trump has expressed bringing Putin back into the international fold. Despite this, the US government and Treasury Department have continued to impose sanctions on various Russian officials, companies, and businessmen.

In the rest of the article, potential meeting prospects and the areas of interest for discussion are highlighted briefly.

The most important talks may include the concerns as the officials are distressed through a list of complaints about Russia’s actions beyond its borders, including its annexation of Crimea, a backing of separatist rebels in eastern Ukraine, support for Syrian President Bashar Assad, and cyber-hacking.

Russian companies have been accused of directly supporting their government intelligence agency’s efforts to carry out cyber attacks. At times, Russians are known to use chambers of commerce and trade groups for intelligence operations. But this extends beyond election meddling accusations to include intrusions into America’s energy grid and threats to underwater cables that transmit much of the world’s communications data. Any further erosion in current relations in these matters of great security and sensitivity could prove greatly destructive to political stability in the affected regions.

There is a possibility of a discussion on the immunity of the following figures as well.

There are chances of some favors’ on merits to be mutually beneficial to Russians businesses too; the following are strong contenders:

This will cater to US industrial sector needs and assist on mitigating the heavy dependency of the USA on China, India, EU, Latin America and others. These group of companies operates in Russia, Africa, Australia, Asia, Europe and Latin America which could provide an edge to the US in projects in these countries.

Although the United States and Russia have imposed economic sanctions on each other since 2014, several large U.S. corporations still count Russia as a growth market. New sanctions and proposed legislation have raised the possibility of fresh challenges for U.S. companies in Russia.

The United States imposed sanctions on Russian oligarchs and government officials and Russian companies. In response, Russian lawmakers are considering legislation that would ban or restrict certain U.S. imports. The industries named in the draft law include software, agriculture, pharmaceuticals, tobacco, and alcohol. Russia is also considering reviewing goods produced in Russia by U.S. companies and the Russian imports from the USA.

The US companies that maintain significant operations in Russia are in several sectors, namely: Technology, Consumer brands, pharmaceuticals, aerospace, as well as automakers and others.

Exxon has been in Russia for more than 20 years, and pumps about 10% of its oil from the country. It operates a large project in eastern Russia and is part of a consortium expanding a crude oil pipeline from Kazakhstan to Russia’s Black Sea coast. But Exxon wants to do more: It asked the U.S. Treasury Department for permission to bypass Russian sanctions to resume a joint venture with Russian state oil giant Rosneft.

Microsoft Corporation has noted that overall market conditions have improved in key markets like Russia. However, following U.S. sanctions, two of Microsoft’s official distributors in Russia curbed sales of Microsoft software to more than 200 Russian companies.

Mondelez International Inc has become the leading chocolate maker in Russia. Similarly, PepsiCo reported that in 2017, its Russian operations generated net revenue of $3.23 billion, which made up 5.1 percent of the company’s total net revenue.

KAZAN (Sputnik) – These US companies operating in Russia are planning to continue their work in the country and even to expand their businesses despite the anti-Moscow sanctions. McDonald’s categorizes Russia as a high-growth market and has opened new locations there in the past two years, according to its annual financial report. Johnson & Johnson has identified Russia as a strong market for regional consumer brands, and Abbott Laboratories is among the top five companies for branded generic drugs in Russia.

Boeing Co named Russia as one of its largest growth markets, as well, but also noted pricing pressures from government-funded domestic competitors in Russia, as well as from China and Japan.

Ford Motor Co doubled down on Russia even as it’s big U.S. rival, General Motors Co, pulled out in 2015. The automaker’s sales from its joint venture with Russia-based Sollers PAO grew in 2017 and results “continued to improve, approaching breakeven.”

Russia imported $12.5 billion worth of U.S. products in 2017, according to official customs data. That included aircraft, machinery, pharmaceutical and chemical products. Publicly listed U.S. companies generated more than $90 billion in revenue from Russia in 2017. Among the industries with the greatest exposure to Russia are food and beverages, technology and pharmaceuticals.

The political players and the pressure for sanctions create uncertainty and disrupt the growth process for these countries and their companies. This leads to dual consequences to a tit for tat approach; for example Russia may stop supplying titanium to Boeing as part of its response to U.S. sanctions. Obviously,  competitors of both the countries can take this opportunity to exploit their dependence on the demand and supply chain and subsequent impacts on production.

Consequently, the impact of the meeting will resonate beyond media discussions of election meddling and the impacts of foreign and defense policies in Syria, the Ukraine and elsewhere. While the two leaders may or may not solve those geopolitical issues, their ability to find a common ground to begin to resolve the resultant trade and sanction issues will have an immediate impact on businesses that operate in both countries… and the ability to conduct business may be a first step in the two powers finding a path to resolve their issues. 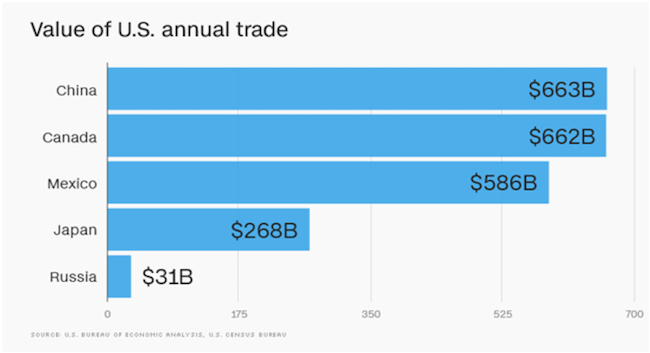 Just 0.5% of American exports go to Russia, on the flip side, Russian goods and services make up just 0.7% of total U.S. imports.

US Firms Operating in Russia Plan to Expand Businesses – US Ambassador

Bina ul Haq is a London based International Expansion Business Consultant. She holds an MBA, and a Masters Level in Global Business from the University of Oxford, Said Business School. She has given lectures, presentations in organisations, international incubators and universities including at the Oxford and Cambridge Club. She is an author of business-related articles with a view to scenario planning and geopolitical aspects.

Women who make a difference in aviation: meet Sherry Avery