We are coming closer to the centennial celebration of Atatürk’s establishment of the modern Turkish state while 100 years have already passed since the Ottoman Empire’s sunset. During the last decades, under Recep Tayyp Erdogan’s leadership as prime minister or president, Turkey has continuously grown economically and, in spite of certain domestic  divisions (see the aborted coup of July, 2016), succeeded in strenghtening an important regional geopolitical position and sought to become a global geopolitical power. Although Ankara denies officially it seeks the restoration of the Ottoman Empire, president Erdogan’s political and military moves prove otherwise. 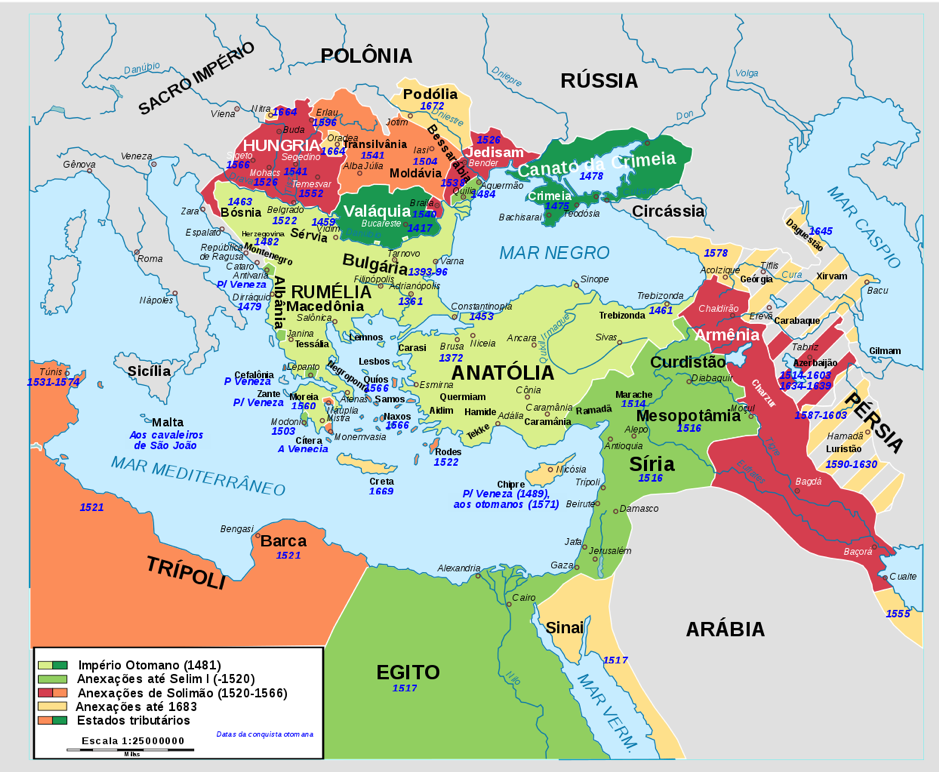 In an article published at the end of last year by a Turkish journalist specialised in foreign affairs[1], Atatürk’s principle evoked in his celebrated speech concerning the battle of Sarakaya[2] according to which not only a single line should be defended but an entire area was recalled. Consequently, Turkey must reconsider presently its defence zone which spreads from Qatar to Libya with Cyprus in the middle. 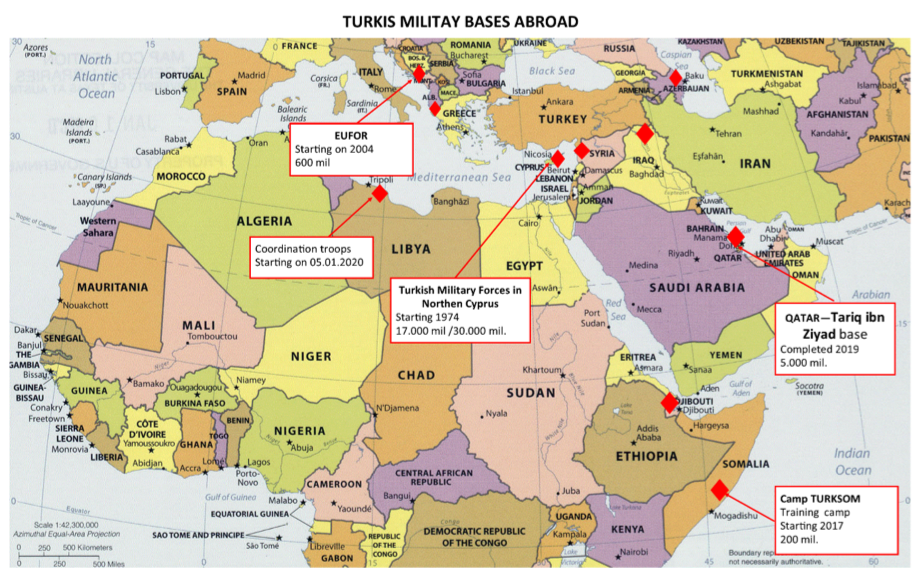 Assessing this fact, one finds that Turkey’s general policy of the last decades was circumscribed to this purpose and that political, military, economic and of other nature steps were taken to this end. The establishment of Turkey’s military bases abroad starting with the invasion of Cyprus in 1974 until the beginning of 2020, when the military involvment in Libya was decided (with a number of troops for training and cooperation; certain sources mention the readiness of sending around 2,000 men who fought on the Syrian front) underlines the said policy. In fact, sustaining such a number of troops in Libya generates tough logistical problems for Turkey as it has no efficient means for that yet. The display of a Turkish drone which left the country and reached Libya after landing in Cyprus only is not enough and, on the contrary, highlights the difficulties of securing the logistical support of an important number of troops in Libya.

Establishing Turkey’s military bases abroad was done by skillfully using the regional political and military developments. The most telling example besides Libya is the Tariq Ibn Ziyad base in Qatar completed in 2019. In Irak, Turkey has around 20 small-scale military bases predominantly for intelligence gathering. Six bases were established in northern Syria with a publicly unknown number of military assigned there. Most probably each of them are equaling at least an infantry company with additional units of artillery and tanks. The intent of setting up a military base in Georgia did not materialise.

Turkish diplomacy plays an important part in materialising president Erdogan’s geopolitical plans and when Ahmed Davudoglu was minister of foreign affairs (2009-2014) important steps were adopted for expanding the diplomatic component of Turkish foreign policy. It seems that now the diplomatic apparatus put in place by Turkey and its quality represents an efficient support for the foreign policy Ankara is currently promoting.

On the military component which is supposed to play  an even more important role in strengthening and preserving the influence area wished for by Ankara leadership, one should mention that although Turkey has one of the strongest armies in the world (NATO’s second and the 19th worldwide, according to Global Fire Power) it is not fully equiped to meet that challenge. After the aborted coup of July 15th, 2016, the management capacity of the army was severely damaged by the arrests, sentencing and dismissals that followed thereafter and even in 2019 (163 generals and admirals – 45% of the army’s total) the effects of which could be offset within around 5-10 years.

President Erdogan (prime minister between 2003-2014, president thereafter and re-elected in 2018) rules with a firm hand the country and, through the constitutional ammendments that were adopted, he succeeded in concentrating the executive power in his hands and to compete for a third term in 2023. Hakan Fidan, the powerful head of MIT (National Intelligence Organization) who secures the president’s position played a pivotal role in annihilating the 2016 coup attempt and is considered one of the president’s main proponents.

Notwhistanding the achievements and the long political career, president Erdogan’s regime begins to present some signs of weakness and the most recent and important one was the presidential party AKP loss of Istanbul’s mayorship which was taken over by the candidate of the main opposition party, The People’s Republican Party (CHP) – Ekrem Imamoglu. The latter opposes the Istanbul Channel project[3], an idea launched by president Erdogan in 2011 and which materialisation the government intends to get started as of 2020.

The current Turkey’s economic condition is relatively healthy although in 2018 the economy contracted shortly and the national currency devaluated by 30%, and the European Bank for Reconstruction and Development assessed in May 2019 a gradual recovery and an economic growth of 2.5% in 2020.

Turkey, which is dependent on energy imputs, cares about making best use of its geostrategic position by building gas pipelines (Turkish Stream started in 2017 and was commissioned on January 1st, 2020) and seeks favourable conditions for exploiting the Mediterranean Sea resources in spite of the tense situation resulted from delineating the marine economic zones (see the map bellow). 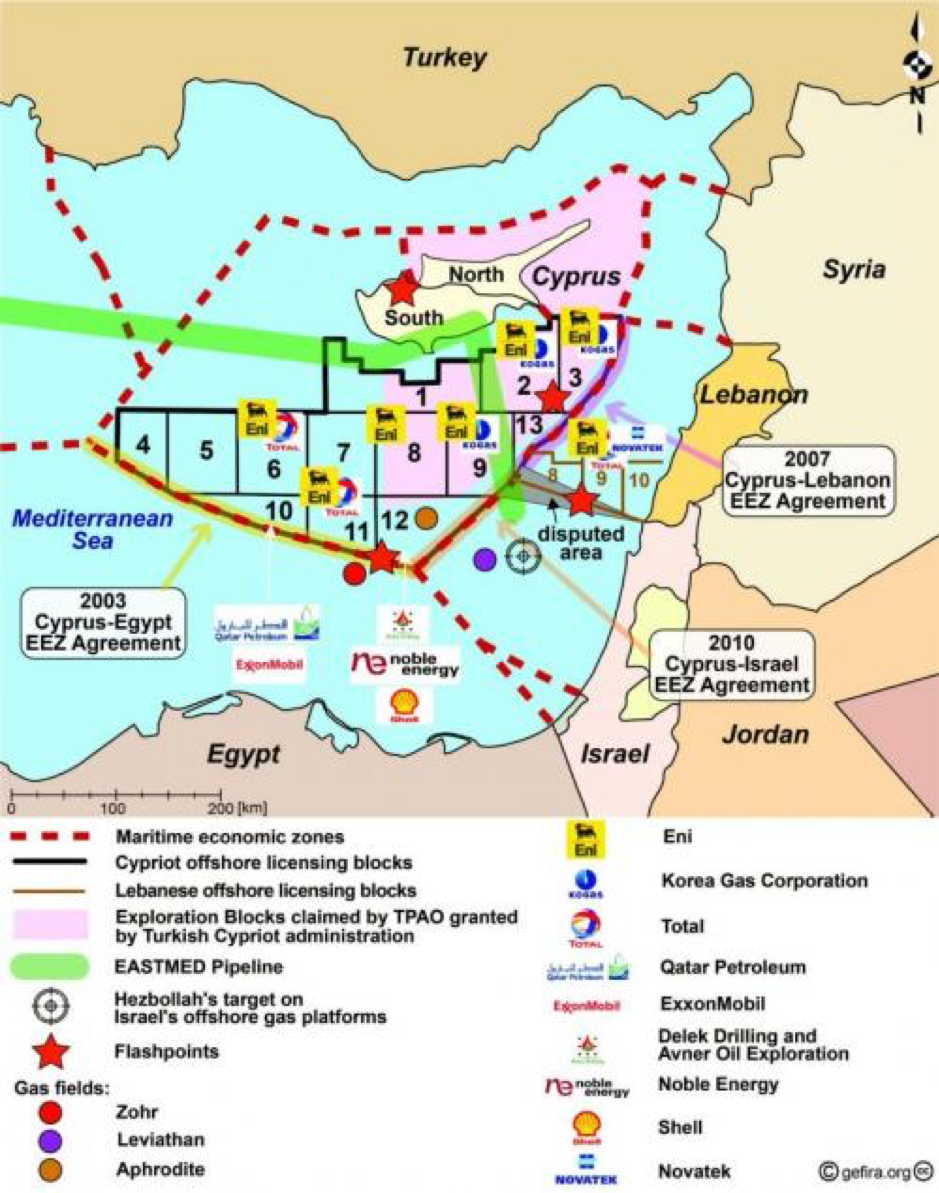 Moreover, in a move intended to make it an unavoidable arbiter in the Mediterranean, Ankara signed with Libya, on November 27th, 2019, a MoU on delineating the continental shelf of the two countries which would practically divide the Mediterranean in two. 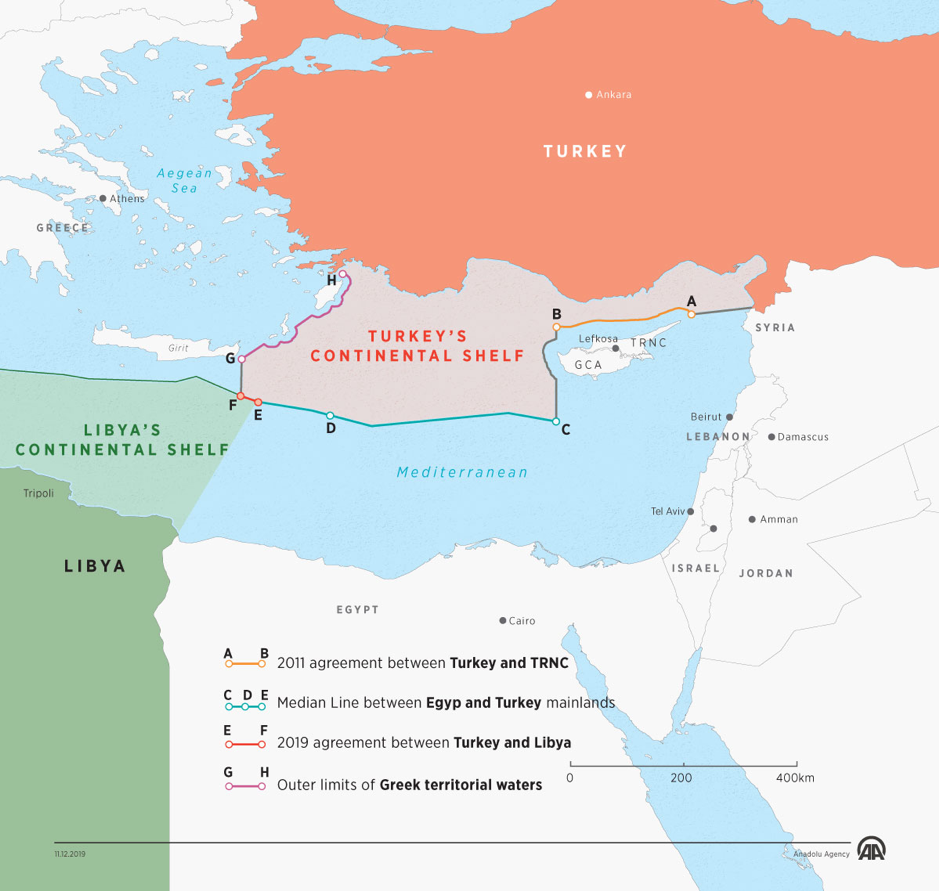 The move could hinder the 1,900 km East Med pipeline to be built by Greece, Cyprus and Israel for which the final decision should be taken by 2022 and to be completed by 2025. 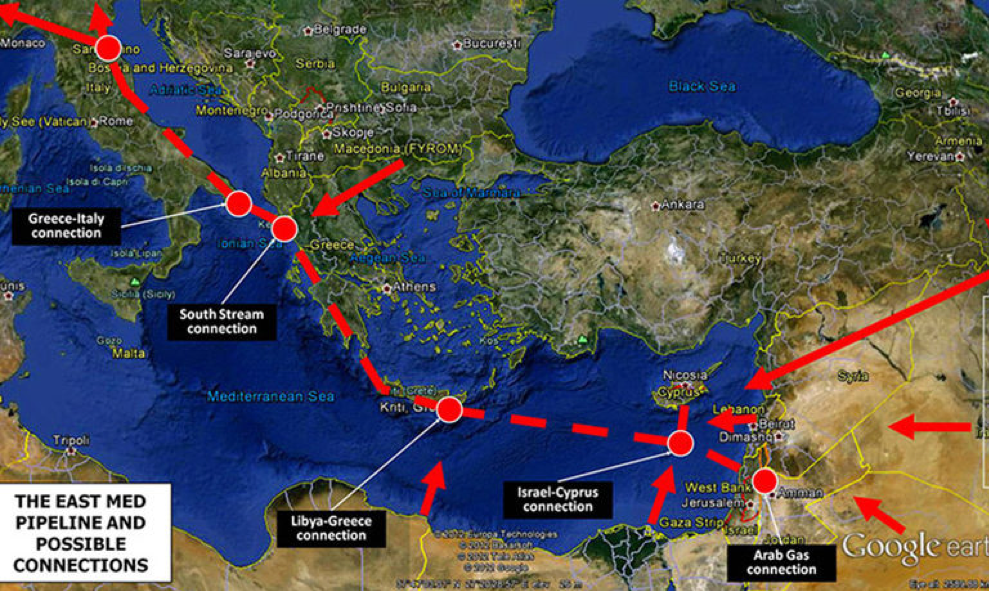 Libya represents an important pole for carrying out Ankara’s plans. The situation in the country is complicated and fluid not only as a result of the domestic developments but also especially due to the conflict between the two powerful groups of prime minister Fayez al-Serraj who heads the Government of National Accord (GNA), recognized by the UN and General Khalifa Haftar who, supported by Russia, France and the United Arab Emirates, controls a great part of the country and who, during the Berlin conference, suspended most exports of Libyan crude in order to have a stronger negotiation position.

Furthermore, in spite of the recent agreement reached in Berlin with provisions prohibiting arms deliveries and foreign intervention in Libya, an important trafic including weapons and ammunition deliveries and foreign ”counsellors” was noticed at Tripoli Airport at the end of January. Turkey’s consolidation of its presence and influence in Libya is seen by certain forces as a danger that may lead to the establishment of an Islamist regime  in the country given that GNA has the backing of several Islamist groups as well as the well-known support Turkey extended to the Muslim Brotherhood in Egypt. It is believed that if there is no international intervention for a cease fire – which I don’t see materialised  in the coming future – the most probable result of the Turkish intervention will be the establishment of another Islamist regime in the Mediterranean.

The accomplishment of Turkey’s plan of restoring an important influence area from the Gulf to the Mediterranean, between Doha and Tripoli, seems doable given the uncertain geopolitical developments regionally and globally. Ankara used to this end the most modern means and international media outlets emphasized that cyber attacks in 2018 and 2019 that would have originated in Turkey against around 50 state and not only institutions in Greece, Cyprus and Iraq were recently exposed.

The latest developments by the end of January 2020 prove once more the fragility and complexity of the situation in the Mediterranean and the inefficiency of the Berlin Agreement: France accuses Turkey of not observing the agreement signed in the German capital and sent to Libya Syrian mercenaries landed off Turkish vessels while Turkey accuses France of supporting Khalifa Haftar in search of benefits in the oil field. Moreover, France decided to dispatch military frigates to the east of the Mediterranean to assist  Greece, a decision applauded by the Greek prime minister while visiting Paris.

Under Erdogan’s leadership, Turkey moves resolved towards maximizing its geopolitical role and position capitalizing on great players’ hesitations (the US, China, Russia). It is difficult to estimate to what extent it will accomplish such plans.

“If you are not fighting for what you want you deserve what you have”, a renowned American speaker and writer said. How great it would be if this phrase were put into practice with due regard for all principles and norms of international law. Unfortunately, the right of force is still stronger than the force of rule and therefore vae victis.

[1]Turkey’s new geostrategy from Tripoli to Doha: “Defending an area” – Mehmet A. Kanci

[2] 23.08-13.09.1921, a battle known also as the “officers war” (in the Greek-Turkish war of 1919-1922), as a result of the great number of losses among those ranks (70-80%) during Turkish War of Independence. It is considered a milestone of the said war. According to the Turkish historian Ismail Habip Sevuk, the battle marked an important moment in Turkey’s history: “the retreat that get started at Vienna on 13th of September 1683 came to a stop 238 years later”

[3] A 50 km long channel which is to connect the Black Sea to the Sea of Marmara allowing for decongesting the Bosphorus strait which was transited in 2018 only by 41,000 vessels. The cost of the project would rise to 11 bn euro while the related investments (port, artificial islands, a new town for 500,000 inhabitants etc) would add another 10 bn euro. The Turkish government estimates that the project could bring in yearly revenues of 8 bn euro. The opponents of the project argue it will damage the environment and provoke ecological changes difficult to estimate. The timeframe suggested by the central government for the project completion, i.e. 2023, is considered unrealistic by some specialists.